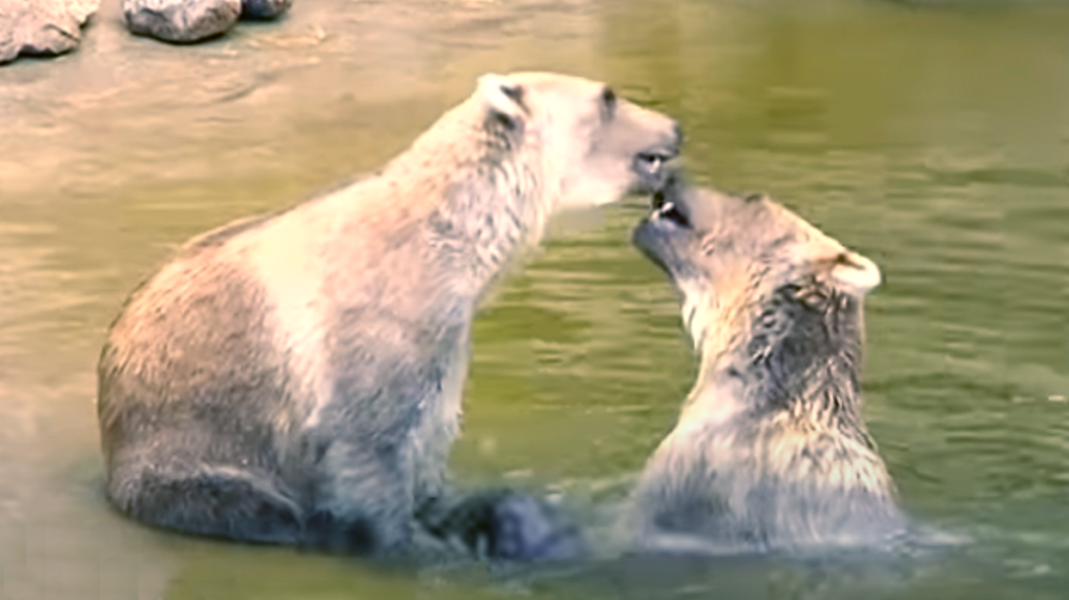 Giant hybrid bears, unofficially dubbed pizzly or grolar bears, are becoming more common in the Arctic. First discovered in the wild in northern Canada in 2006, the hybrids between polar bears and grizzlies are fertile.

As the climate warms, more of these huge bears are showing up. In appearance, they look like oversized teddy bears, with blondish highlights. However, they also have long, sharp claws and humped backs like grizzlies.

Larisa DeSantis, a biology professor at Vanderbilt University, has known about pizzlies for a long time. Pizzly bears have been in captivity in zoos for years. However, now due to ongoing Arctic warming, she says they may become more common in the wild.

Polar bears are traveling greater distances looking for food as ice flows melt and seals become harder to catch. As a result, they are meeting more grizzlies and sometimes “engage in opportunistic mating.”

At the same time, grizzly bears are heading north as temperatures rise. Then, the bears are likely to hook up and pizzlies are the result. Unlike many species, these bears diverged relatively recently, about 500 to 600,000 years ago, says DeSantis. Consequently, the cubs can grow into healthy bears capable of producing offspring of their own.

Recommended: 3-year-old boy found alive after vanishing in woods says he: “hung out with a bear for two days”

Are Pizzlies Adapting to Climate Change?

Now that pizzlies and grolar bears are becoming more common, it makes you wonder what it means for polar bears and grizzlies. DeSantis says the hybrids could prove more adaptable as the climate changes, but that’s not the rule for hybrids.

“Most of the time, hybrids are not more vigorous than either of the two species,” DeSantis said. On the other hand, pizzlies may have advantages since they have a varied diet.

“These hybrids might be better suited for a wider range of food sources like the grizzly bear. And, in contrast with the polar bear, which is hyper-specialist,” said DeSantis.

Polar bears typically hunt seals and other marine animals on sea ice, but now they are scrambling to find food as the ice melts. Researchers have recently watched them awkwardly hunting sea bird eggs from drones in Canada’s Hudson Bay.

Recommended: Deaf hiker slips and falls 700 feet – but then a ‘white wolf’ comes to save her

A Pizzly Bear in My Cabin

In 2010, an Inuit hunter named David Kuptana found a pizzly bear in a cabin near Victoria Island. He and his wife were on a hunting trip for polar bears, still allowed in small numbers for the Inuit.

According to News Channel Nebraska, David and his wife arrived to find a bear had ransacked one cabin, so they headed to the next of six cabins.

“This [cabin] was also ransacked, and there were fresh bear tracks in the snow. Even more strange was the mattress was pulled off the bed and dragged outside. This was something David had never seen bears do. He went from cabin to cabin, and all five were ransacked. It was when he got to the sixth cabin that he found something incredible.”

In the sixth cabin, he spotted a pizzly bear. Its unusual appearance frightened him, and he shot it. Then, David took the bear to a local government official who had its DNA tested. Soon, the results pointed to the bear as a hybrid – 75 percent grizzly and 25 percent polar bear, a pizzly.

In captivity, pizzly bears have been seen in zoos for years. For example, Germany’s Zoo Osnabrück is home to two pizzlies: Tips and Taps. They are featured in the image for this story.

See more about this story from Facts Verse: