The Turtle Whisperer and His Superhero Spaniels Help Save Box Turtles 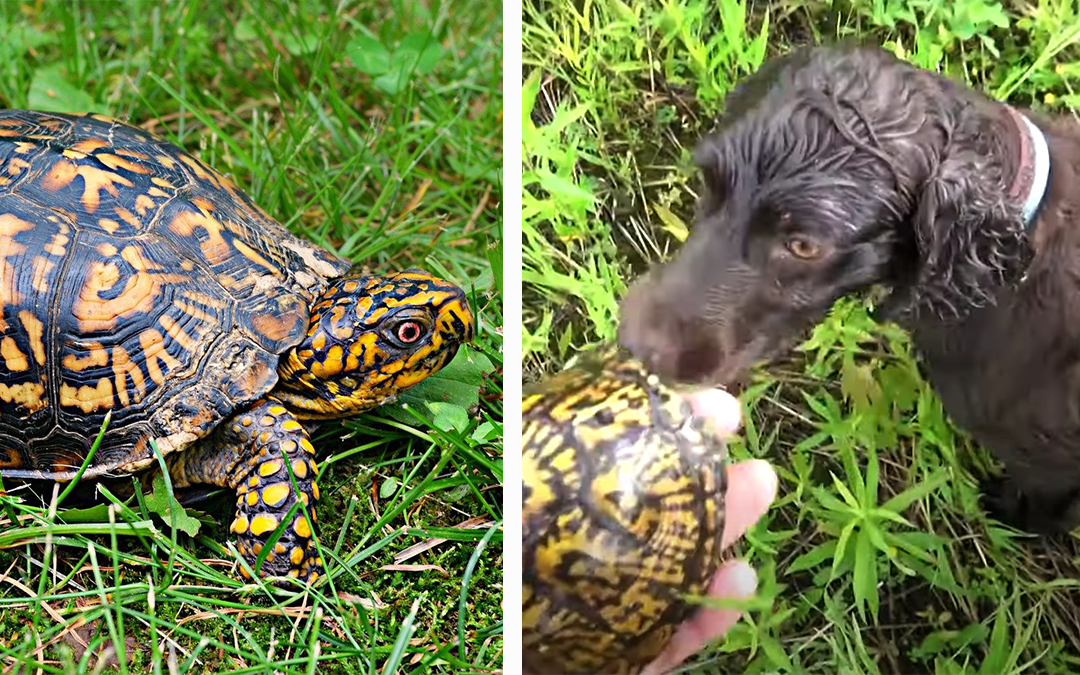 Formerly a High Scool North Carolina English teacher, Rucker now trains his dogs in Montana to find the turtles. Traveling the country, he camps in the grasslands he loves for an average of four months of the year.

“My dogs are sort of the superheroes in the turtle department,” Rucker said.

Fortunately for the turtles, the Boykin Spaniels have “soft mouths” and don’t harm them. Instead, the dogs only bring them to Rucker, who works with wildlife advocates across the country.

“They’re also eager to please,” said Rucker. “They love nothing more than to find a turtle and proudly bring it to me.”

Originally, three of his dogs began spontaneously bringing him box turtles on hikes. Over time, he mentioned his pet’s funny antics to friends.

Soon, word spread, and biologists realized these dogs could greatly help them find the turtles. Instead of struggling to find them, the dogs could retrieve them efficiently. Then, the researchers could carefully study and release them. In some cases, they attached transmitters so they could follow the box turtle’s slow travels and habits.

“We never keep any of the turtles that I catch,” Rucker explained.

A Team of Box Turtle Retrievers

After many years, Rucker’s team of trained turtle dogs has grown, and now he has:

To train them, he and his girlfriend, Karen Judge, start with painted golf balls.

At around three months old, the dogs graduate to finding a fiberglass turtle Rucker created using an empty shell he found. A coating of bacon grease encourages the dogs to pick up the dummy shell. Thus, the dogs learn the unique shape of what Rucker wants them to find for him.

Next, Rucker trains the dogs to pick up the scent of a box turtle’s urine trail. From there, the dogs help teach each other what to do.

“Once you bring them out into the field and they see the older dogs catching live box turtles, they remember,” Rucker says.

Taking It Slow for Up to a Century

Amazingly, box turtles can live for a century, yet average 25 to 30 years. However, they may only begin to reproduce after some 20 years. Due to habitat loss, roadkills, collection for pets, and various environmental issues, they’re in trouble like many species today.

Although box turtles only move about a mile a day, they are almost impossible to spot in their habitats. However, Rucker’s group of specially trained Boykin spaniels enjoy it like a game. Using their keen sense of smell, the dogs track the scent.

When the dogs find a box turtle, they bark excitedly and wag their tails. Then, they carefully pick up the turtles, which safely retreat inside their uniquely hinged shells.

Box Turtles are a Sentinel Species

For scientists, the box turtles are a critical sentinel species that can reveal when an ecosystem is in trouble.

Sharon Deem, director of the Saint Louis Zoo Institute for Conservation Medicine in Missouri, works with Rucker and his team of Boykin spaniels. In the state, the three-toed box turtles are the official state reptile.

As you would expect, three-toed box turtles tend to have three hind toes. In many cases, males have red eyes while female eyes are brown. However, there are always exceptions to the rule.

“Turtles are long-lived, slow to reproductive maturity, and are very affected by environmental change,” said Deem. “They’re an indicator of ecosystem health, not only for turtles but for other animals and even human health. It’s crucial that we protect them.”

For biologists, it’s imperative to study the spread of ranavirus killing wild reptiles, amphibians, and fish. Unfortunately, it has devastated box turtles in many states but doesn’t affect warm-blooded animals like dogs. In the United States, scientists confirmed cases in the northeast, southeast, midwest, and northwest.

Hopefully, John Rucker and his team of superhero spaniels will help conservationists save box turtles. They’re wonderful animals that deserve our protection and appreciation.