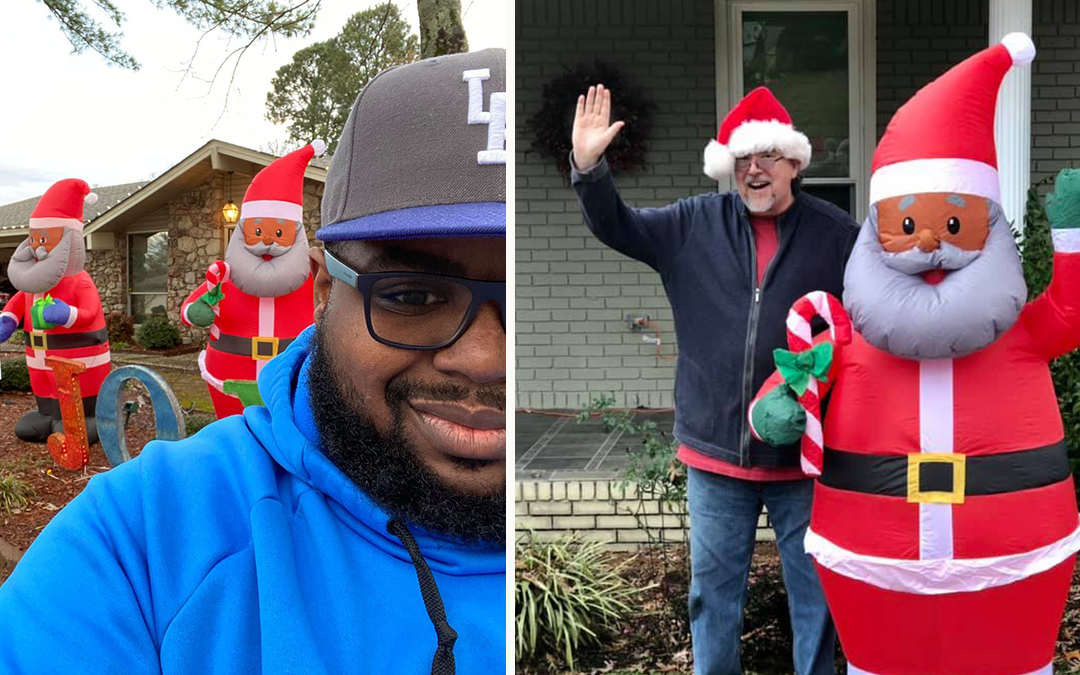 In Arkansas, neighbors are buying Black Santas this year in a show of support after one family received a racist note.

At Christ Kennedy’s North Little Rock, Arkansas home, he loves making people smile at the holidays. Every year, he puts out his Christmas decorations as he did with his father, and for the third year in a row, an inflatable eight-foot-tall Black Santa stood proudly among them.

He hoped to set a good example for his 4-year old daughter Emily, wife Iddy, and community. The family started displaying the Santa when Emily was born in 2016.

“We wanted her to grow up seeing herself represented in all forms and know that she has no limitations,” he said. “It’s very hard for us to find Black Santa decorations here in the South, so whenever we see them, we often buy them.”

A Faked Letter in the Mailbox

Standing nearby, a sign reading, “Love your neighbor y’all,” stands near giant letters to spell out JOY.

“I’ve done this every year. Haven’t had any issues,” Kennedy said.

Then on a Monday, someone put a letter in his box, posing as if it came from the local homeowner’s association. The association later confirmed it had not come from them, condemning the letter and giving the family a complimentary membership.

Along with a picture of a white Santa with two thumbs down, someone wrote a horrible message:

“Please remove your negro Santa Claus yard decoration,” the letter, signed “Santa Claus,” demanded. “You should try not to deceive children into believing that I am negro. I am a caucasian (white man, to you) and have been for the past 600 years. Your being jealous of my race is no excuse for your dishonesty. Besides that, you are making yourself the laughing stock of the neighborhood. Obviously, your values are not that of the Lakewood area and maybe you should move to a neighborhood out east with the rest of your racist kind.”

“I just got something in the mail that is one, incredibly offensive, and two, just says where we are,” Kennedy said.

“I am trying to be as nice as I can in this very moment because I am actually filled with rage. It’s very disheartening because it’s holiday time; we’re in a pandemic.”

The message also saddened Iddy Kennedy and made her question if her neighborhood was safe for her daughter.

“I was genuinely hurt,” she said. “When we originally received it, I wondered if we had made the right choice; if this was the right environment to raise our daughter.”

Then, he reported the incident to the North Little Rock Police Department and post office for harassment.

Neighbors Start Displaying Black Santas of Their Own

In response, his community overwhelmingly supported the family. During an interview with WLS10, one woman said she drove from nearby Sherwood to give Kennedy her support.

“We just drove from Sherwood to let you know; I hope and pray that you do not take him down because children need to see him,” the woman said.

Kennedy confirmed that Santa was staying right where he was.

“The children love it, and that’s what Christmas is about, it’s about children,” said Kennedy.

See the story from WSLS10:

Black Santas Pop Up All Over the Neighborhood

Following the incident, the neighborhood has continued to shower support on the Kennedy family.

In a TODAY interview, Kennedy related all the amazing things that started happening.

“The rest of the neighborhood has been awesome since hearing about the letter,” he said. “If we are outside, they often stop by and share kind words of encouragement. Some have brought us over cookies and other treats. One even brought us a yard sign that says ‘Love your neighbors, Y’all.’ We have gotten gifts of Black Santa yard flags and a Merry Christmas flag with a Black Santa on it. Our neighbors have been absolutely amazing.”

Then, neighbors, one by one, started to display their own Black Santas on their lawns. For example, Chip Welch put a Black Santa on his lawn.

The Post reports that Welch thought whoever sent the letter was not reflective of the kind of country he wanted to live in:

“It was unsolicited, it was undeserved, it was un-Christmas, and hopefully, it was not reflective of Lakewood, and certainly not reflective of the kind of country I want to live in,” said Welch, who has lived in the neighborhood with his wife for more than 20 years. “We were all pretty concerned about it, and we decided it would be poetic for everyone to get Black Santas.”

An Outpouring of Love for the Holidays

Soon, Black Santas were everywhere, including at the home of one of the neighborhood association’s directors. The Post reports that so many neighbors ordered the Santas that retailers ran low on supplies.

Now, Iddy Kennedy says she feels much better about her daughter’s neighborhood.

“There is definitely more positive than negative,” Iddy Kennedy told the Post. “The outpouring of support made me realize that this is the perfect place to raise our daughter.”

“She may not understand, but she definitely notices the Black Santas popping up,” she continued. “I would like to think that’s a warm and fuzzy feeling. I didn’t see it growing up, but the fact that it will be normalized for her gives me hope for the future.”

“The outpouring of love, support, and unity that we’re seeing from the community has just been incredible,” said Chris.

“At the end of the day, what was meant for evil was flipped for good. We are showing that we are truly better together and united as one.”

After a gift came from New York, the family has two Black Santas on the lawn.

Related: 90-Yr-Old Asks Santa To Dance With Her. When I Saw Her Moves I Couldn’t Help But Smile

Although the Kennedys have loved the support, they ask that any donations go to the Ronald McDonald House Charities of Arkansas. So far, the charity has reported more than $1,000 donated in the Kennedy family’s name.