90-Yr-Old Asks Santa To Dance With Her. When I Saw Her Moves I Couldn’t Help But Smile 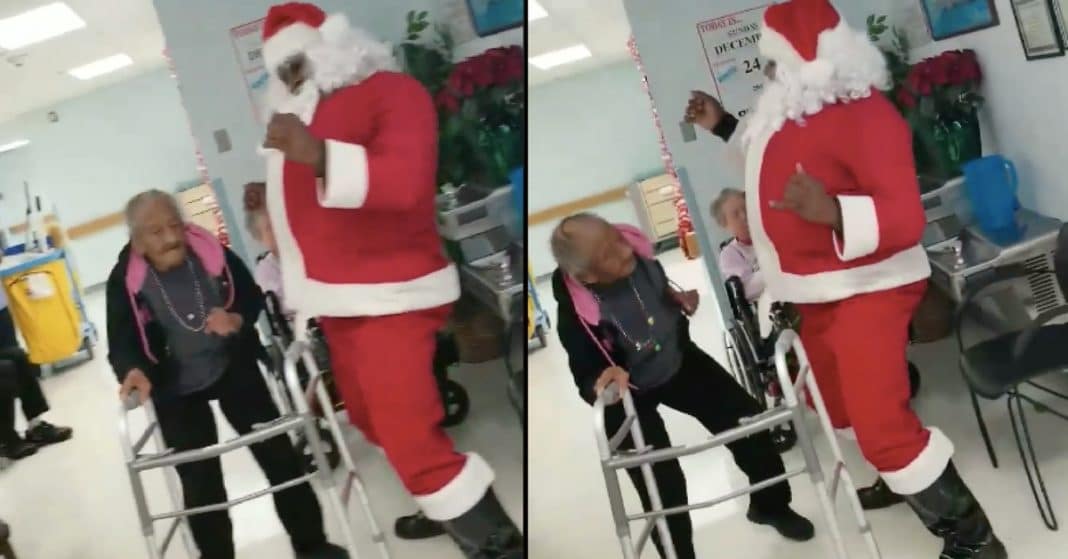 Christopher Tate is a minister in the D.C. area who has two passions: ministering to prisoners and loving on the elderly. Christmas is a busy time for him as he makes his way around the city to meet with the people who are on his heart.

This year on Christmas Eve he made his annual trip to Unique Residential Care in Northwest D.C. to put on what he calls “The Golden Christmas.” He dresses up as Santa and he and his family visit each of the residents to deliver gifts.

It’s something Tate has done for the past five years; but this year, something happened during his visit that has shot him into the public eye.

As he was passing out gifts, a 90-year-old woman came to him with a special request.

“We went to the nursing home and while my daughter and helpers passed out gifts, I went room to room to greet each senior,” Tate said. “I came upon her and she said, ‘Santa, I wanna dance!'”

The woman was using a walker, so Tate didn’t know how well she’d be able to move, but he happily obliged. The two began to dance to “O Come, All Ye Faithful,” and what happened next left the minister stunned.

As soon as the woman started to dance, it was like she was a young woman again! A spark had been lit in her and she began to shake her hips – to the delight of everyone watching!

Tate said he was “in shock” at the elderly woman’s moves – he struggled to keep up!

“After we were done, there were so many seniors hugging me, crying and didn’t want us to leave,” he said.

Tate posted a video of them dancing on his Facebook page, wanting to share the moment with his friends and family. But when he woke up the next morning, he couldn’t believe his eyes. The video had already been viewed over 2 million times!

“Countless messages started pouring in from all over the world,” he said. “My Facebook has nearly caused my iPad to explode.”

Many people have reached out to thank him for the video. Some have told him they were dreading the holidays after losing a loved one, but said the video brought them joy and helped alleviate some of their pain.

“I’ve been crying since Sunday,” he said. “My birthday is next week and this was an early gift!”

In just a couple of days, viewings of the heartwarming video have nearly doubled and even more people have written to say how much they love it. But it was commenter Patrice Stevens Winston who asked the question we’re all thinking:

“What is the Walker for, though?”

Did you love watching this 90-year-old woman’s joyful dancing as much as we did? So share this!