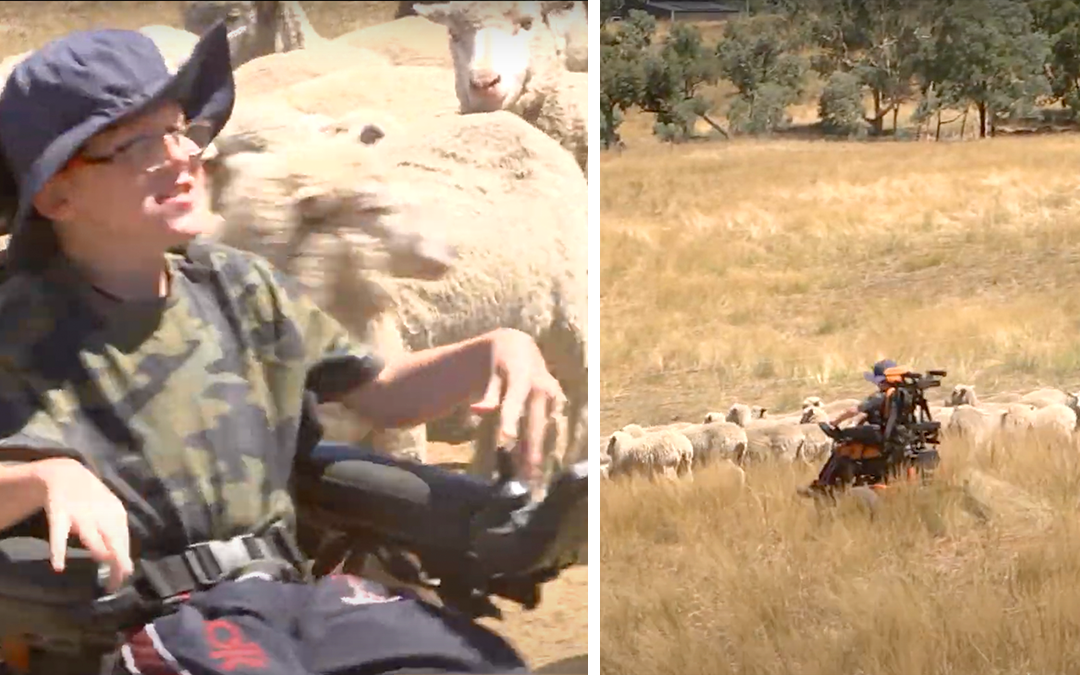 A 9-year-old boy with cerebral palsy in southeast Australia, Lucas Wallace is inspiring people worldwide. For his family, he has been a daily inspiration, taking to farm life like a duck to water.

Lucas rides in a specially outfitted wheelchair that allows him to perform daily chores on the family farm. One of his favorite activities is mustering sheep, helping move them into their paddock from the fields each day.

Along with older brother Blake, 11, and father, Matt Wallace, the family cares for sheep, fruit trees, and chickens. Recently, Blake has been learning to separate the ewes from the herd.

However, Lucas is in charge of mustering the sheep, and he loves it, riding along on sturdy wheels. Along with helping out with the sheep, he’s always ready for anything.

“Anything we do on the farm, he’s there,” says mom, Phyllis Wallace.

Life on the Farm

The Wallace family decided to make a big move, buying the farm two years ago. Their decision came after seeing how much the brothers loved their grandparent’s land.

“So when we started taking him out to visit them, and he had his old wheelchair, you could see his eyes light up and how excited he was to have the freedom,” Phyllis told ABC News.

After a short time, the brothers found their favorite interests, and Lucas found out he’s great at mustering. Now, the family is delighted to see him gaining new skills they didn’t realize were possible.

Now, Lucas wants to participate in more daily chores, learning each day. Phyllis notes he’s both “determined” and “stubborn” to get involved.

When it’s time to shear the sheep, Lucas helps gather the wool.

“We had shearing a few months ago, and he was helping grab the wool off the table and put it into the right bales.”

Wherever help is needed, Lucas is ready to go.

“Pretty much anything that we do on the farm, he’s there — whether it’s going down to feed the chickens or collecting the fruit off the trees.”

Each day, Lucas is adapting and finding his unique way to accomplish tasks.

“If he can’t find something he can’t do in a normal way that we can, he’ll adapt it; he’ll find a way around.”

Lucas Inspires Others to Try Farming

After Phyllis shared a video of her son mustering sheep on social media, it went viral, receiving supportive comments. In some cases, people said they would encourage their children with similar conditions to get involved with farm life.

“Even though he is stuck in a wheelchair when we’re outside, it doesn’t stop him from being an active member of the family.”

Although Lucas is inspiring people everywhere, his mother says he’s also an ongoing inspiration for her.

“He’s been a huge inspiration for me — on my low days, I just look at Lucas and see the way his face lights up when he gets to go out and do something,” she said.

For Blake, the farm allows him to be actively involved more with his brother, cooperating as they enjoy farm life together.