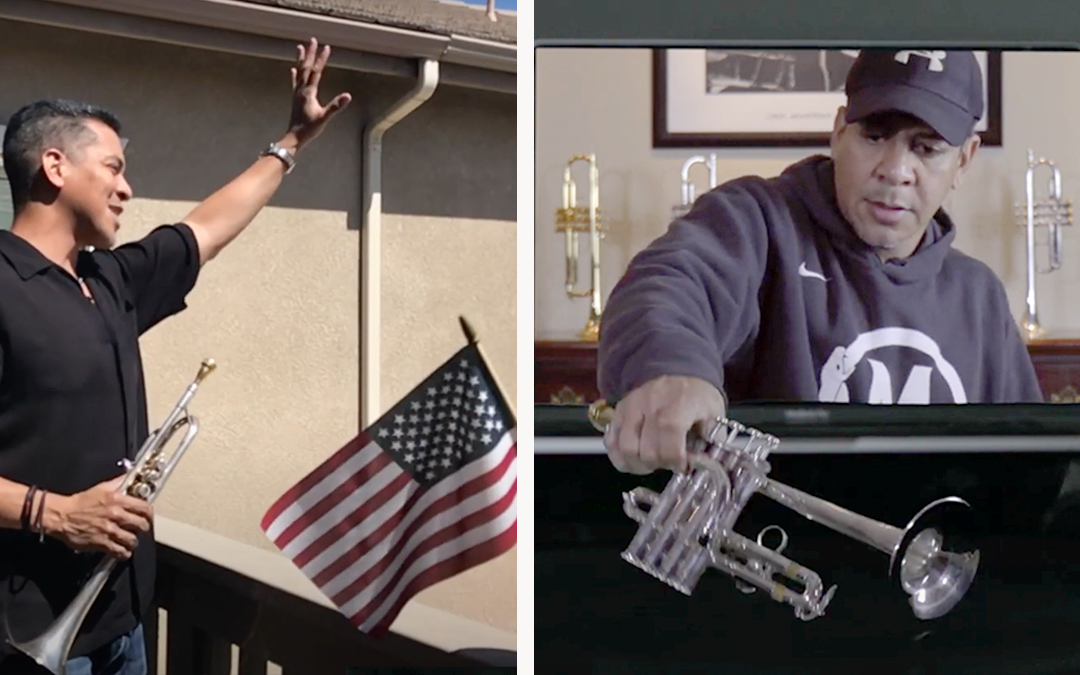 Like most musicians over the past year, Barry Perkins, principal trumpeter for the Pacific Symphony Orchestra, found himself without a live audience. Like many other artists today, he found a new way to reach people quarantining at home.

As a youngster, Perkins learned trumpet from his father at age five. Then, at his first recital in the fifth grade, he played Darth Vader’s theme from Star Wars. From there, he went on to eventually play for the soundtrack to recent Star Wars films.

Describing the moment he and fellow musicians got to play in Star Wars to ABC7, Perkins said,

You can hear his trumpet in many blockbusters like Aquaman, Deadpool 2, and Hidden Figures.

With the symphony, Perkins played for the most prestigious concert stages in the world. However, for months on end, the symphony, like most performers today, was stalled indefinitely.

That’s when Brant got creative on YouTube. The musician was always curious about filmmaking. So, while the symphony postponed performances, he had the time to explore making movies. The cast? His wife and 14-year-old son, who he taught about filmmaking in a home studio as he went.

“I gotta use the folks in my bubble,” Perkins said.

While diving into making movies for YouTube, he gained a new appreciation for how much work goes into the creative process.

“I didn’t realize how involved it was for video productions,” he said. “Until you really dive in, it was like, Wow, there’s thousands of hours here that’s involved in the creative process.”

Getting Creative at Home

First, he started by entertaining his neighbors, playing outside his California home with his son Noah, who also plays trumpet. Then, he performed Taps to honor fallen service members on Memorial Day.

Next, he teamed up with Juan Carlos Meza, the Orquesta Sinfónica De Costa Rica Principal Trumpet. The two played together in a virtual performance across thousands of miles. After that, he continued to get creative with his filmmaking, inserting himself into movie scenes.

In one case, he pays homage to the 2010 film, Inception, about a thief who enters people’s dreams to steal their subconscious secrets. Joining the Pittsburgh Symphony’s Principal Trumpet Michah Wilkinson, he acts and plays his own original music.

The Pacific Symphony blog described the innovative video used in an assignment for students at a Florida university.

“‘Inception Reflection’ is a thought-provoking video, especially in the middle of a global pandemic when reality can, at times, seem like a dream and dreams can be even more unreal than usual.”

Reaching Through the Computer Screen

In another video, Perkins takes a humorous take on ZOOM Trumpet lessons. This time, he uses some special effects to reach beyond the computer screen to play his trumpet.

Perkins also created some beautiful videos to celebrate the magic of the holiday season. In one scene, he gives a virtual performance for Santa. As you can see, the videos keeping getting more polished and creative. Who knows where these new skills will take him in the New Year?

Artist Are More Important Than Ever

Artists like Perkins are more important than ever as we get through these difficult days. Even though we can’t participate in live events like we used to, creative people have offered an outlet and relief in so many ways.

Like many professions we once took for granted, artists are struggling to make ends meet.

“Whether people recognize it or not, the work of artists and creative individuals has helped us all cope with these unprecedented times,” she said. “Listening to music, watching films, writing, dancing, making art — this helps us process feelings of loss and hopelessness, to reflect, and stay connected to our shared humanity.”

Nevertheless, many dancers, musicians, and other performers may not return, even when the pandemic is over. About 42% of arts organizations in California have laid off or furloughed artists, while 13% are not confident they’ll survive the pandemic. Hopefully, one day not too far away, audiences will return.

We don’t know about you, but it sure sounds exciting to attend live events again one day! As we begin to get back to normal, we can all help support the creative people who helped us get through it all in so many ways.

We leave you with an incredible performance by singer Annie Lennox. She and the London City Voices Choir released a profound video performance of her arrangement of Purcell’s “Dido’s Lament.”

The video captures how we’re at once isolated and together, thanks to technology and thousands of creative souls.