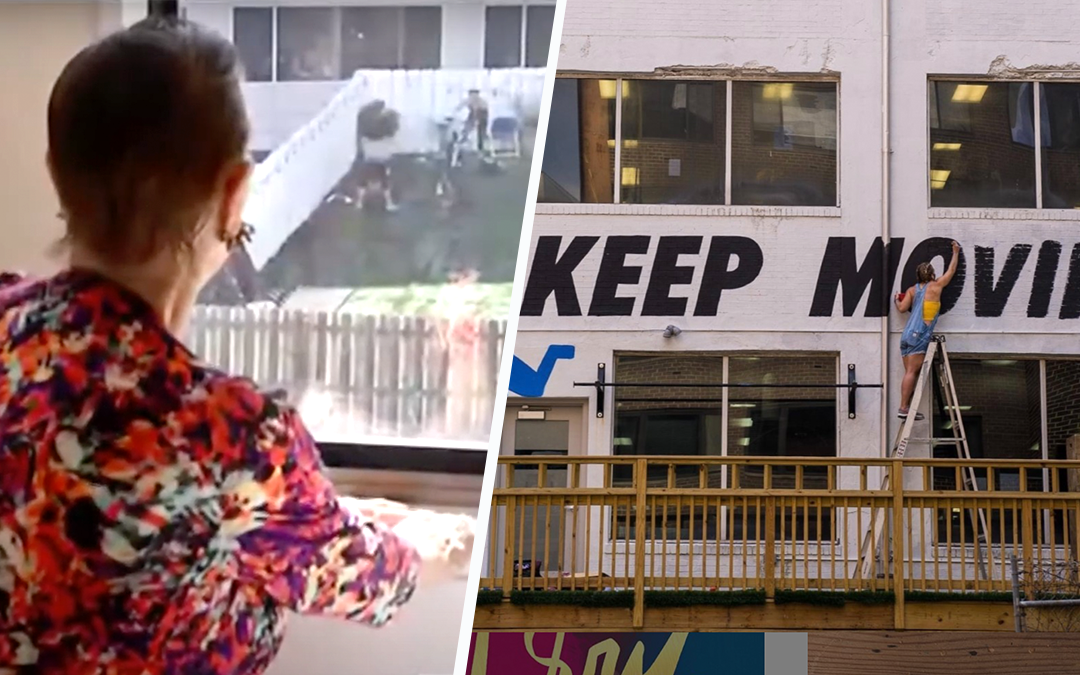 That hopeful message came from a group of people she doesn’t know. Nevertheless, they painted those words on a mural outside her apartment window after being inspired by her.

Today amid the Covid-19 pandemic, many of us feel cut off from the world. We’re staying cooped up indoors to stay safe, watching from the window. Sometimes, seeing the mailman arrive is the big event for the day.

Similarly, Sollom Williams is cooped up at home, watching the activity outside her eighth-floor assisted living facility window. Next door, the Balance Gym began working out each morning at 7 a.m on a green rooftop in the nation’s capital.

There, the gym renovated the rooftop and began hosting socially distanced classes. Often, Sollom Williams watches from morning until the last class at 7 p.m., sometimes moving along with them.

The spectator has taken to observing the gym’s daily activities as a source of inspiration and entertainment. Over time, she came to feel connected to the group, watching every morning.

“I feel close to them even though there’s quite a stretch really from my window to theirs, and I enjoy watching them work out. I mean, they’re so dedicated,” Williams told Fox5DC.

A Ballerina with the International Ballet

For the one-time ballerina with the International Ballet, daily exercise was a routine part of her life for 15 years. Once, she trained under famous dancer Mona Inglesby. Then, she ran her own ballet school in Spokane, Washington, for 34 years.

After her husband’s death four years ago, Sollom Williams moved to D.C. to be near her daughter, Tanya Wetenhall.

Until recently, she enjoyed exercise classes at the retirement home. Then, due to the pandemic, classes stopped but she can still enjoy a sort of virtual class from her window.

“You can’t really do anything like dancing or acting without putting your whole body and mind into it, and that’s what they do over there, and that’s what I did when I was training,” she told Fox5DC.

Recommend reading: Man Pushed Onto Subway Tracks. What Ballet Dancer Does Next Leaves Onlookers In Disbelief

In their daily phone calls with her daughter, the ballerina often talks about the classes next door. The gym’s rooftop offers a “little patch of life,” as her daughter puts it.

“In a way, this was a lifeline for her, to see people in motion. You think you’re doing something for yourself, but it’s really a thread of life that’s being extended to someone else,” explained daughter Tanya Wetenhall.

One day, Wetenhall decided to let the gym know how much their activities mattered to her mother. So, she sent them an email, which inspired the gym staff who have seen a downturn in memberships lately.

Devin Maier, a part-owner of the gym, told the Washington Post:

“It made our day. It was very timely and much-needed,” said Maier.

The staff was touched to learn their activities inspired their neighbors and shared the story on social media.

“Her worst days are rain days, and she worries if your members are okay and getting their exercise. I hope you can share with your members that they have given an elderly lady much joy in seeing them embrace health and life. Thanks so much!” wrote Wetenhall.

A Mural to Encourage the Community

Following the email, the gym and a team of volunteers decided to create a mural. They hoped to encourage Sollom Williams and any other onlookers. Above the doors in big gold letters, they painted the words, “Keep Moving.”

“We sometimes don’t realize that we can potentially inspire others just by training and going about what we do on a daily basis,” said Maier. “If we can get people stuck inside moving in their bedrooms, even just a little bit, I think that’s extra special.”

“I hope it reminds people that they have to smile and stay determined,” she said. “Keep moving, no matter what.”