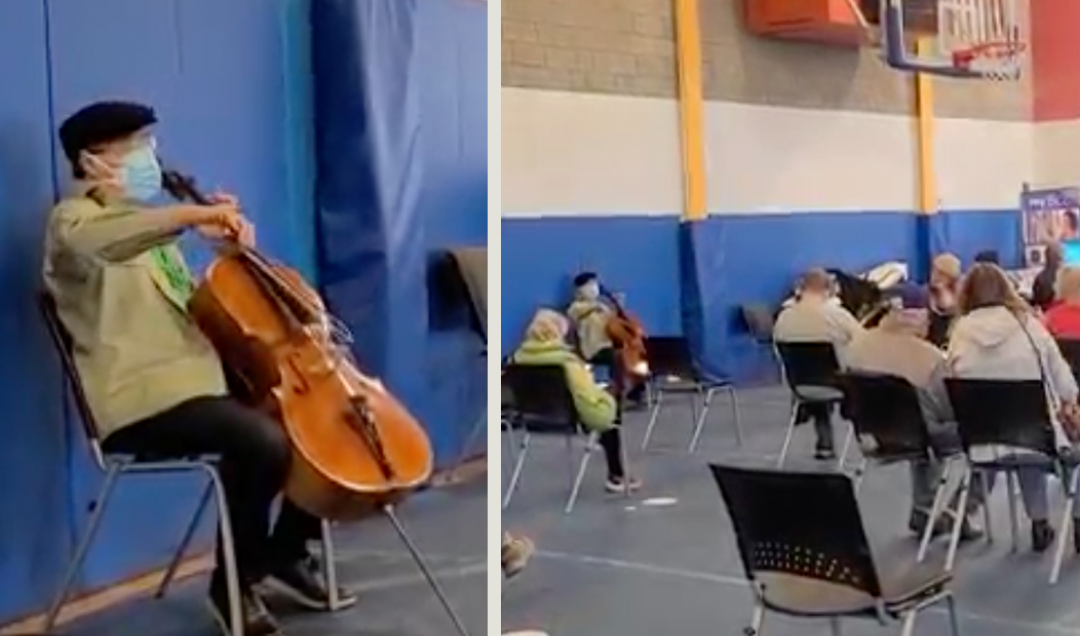 Yo-Yo Ma, 65, has performed on stages worldwide, but on Saturday, March 13, he performed for a select group in Pittsfield, Massachusetts. This time, his audience was a small group receiving their life-saving COVID-19 vaccinations.

Wonderfully, the cellist had just received his second dose. Then, he was prepared to make the most of the 15-minute waiting period after the shot. He was ready, bringing along his cello to serenade the crowd. Beforehand, he asked the clinic manager if he could perform for the observation area.

Thus, everyone at the Berkshire Community College got a free concert from an 18-time Grammy award-winner!

His musical selections for the occasion: Franz Schubert’s “Ave Maria” and the prelude to Bach’s “Cello Suite No. 1.”

As you might expect, watching Yo-Yo Ma perform after the COVID-19 vaccine was an emotional experience.

“Many people were moved to tears,” Jonah Sykes told CBS. “It was an exceptional moment at the end of a long day of giving shots.”

After all, what could be better than realizing you are safer from a pandemic while one of the world’s best musicians serenades you?

Of note, Yo-Yo Ma received his second dose to mark the first anniversary of “Songs of Comfort,” a series of recorded-at-home Twitter posts.

Using the hashtag #SongsofComfort, he posts videos of himself playing the cello. Thus, it was one way he knew he could comfort others when everyone began quarantining at home last year.

“In these days of anxiety, I wanted to find a way to continue to share some of the music that gives me comfort,” he tweeted in March 2020.

Overall, his musical choices have taken inspiration from heroic health care and frontline workers. In another special case, he shared a song he once played for his friend, Fred Rogers, famous for Mister Rogers’ Neighborhood. We know Mister Rogers would have loved this performance helping others during the pandemic.

Incredibly, the Twitter series led to a worldwide project as other musicians joined him. In December, Ma released “Songs of Comfort and Hope,” an album with pianist Kathryn Stott, a collaborator for decades.

“As alienating and isolating as life has felt this past year, the day will come when communities can join together once more: in celebration, in grief, in hope, in music,” said Ma. “The refrain ‘Walk on, walk on, with hope in your heart, and you’ll never walk alone’ is truly an anthem for this time.”

Stott says the project is a way to support musicians at a bleak time in history.

“When Yo-Yo and I got together a few months ago,” said Stott, “we were determined to find a way to help support our colleagues in what is essentially the bleakest of times for the musical profession. ‘You’ll Never Walk Alone’ has always been such an iconic song, but during the pandemic has taken on even greater significance.”

In September 2020, Yo-Yo Ma and fellow American musician Emanuel Ax took part in surprise pop-up concerts. Amazingly, the famous duo rode on a flatbed truck with a specially-created traveling stage in Pittsfield and Lee, MA. In various locations, they gave a concert for:

“The intention was really to give a gift to the Berkshires community,” said Carrie Holland, a co-organizer for the concerts.

Holland told the Berkshire Eagle that the heroic frontline workers had no idea they were about to get a concert, a wonderful surprise.

“It was a mix of shock and tears,” Holland said. “You couldn’t quite see the smiles behind the mask, but you could see it in their eyes.”

Artist created the traveling stage for the world-famous musicians. As they played, organizers maintained safe social distancing creatively: Hula-Hoops on the ground served to mark the safe boundary. And, only 50 people could attend at a time, a private concert to remember forever.

What a wonderfully uplifting way to show appreciation for the frontline workers who have saved us all over the last year.

See a scene from one of the pop-up concerts below: