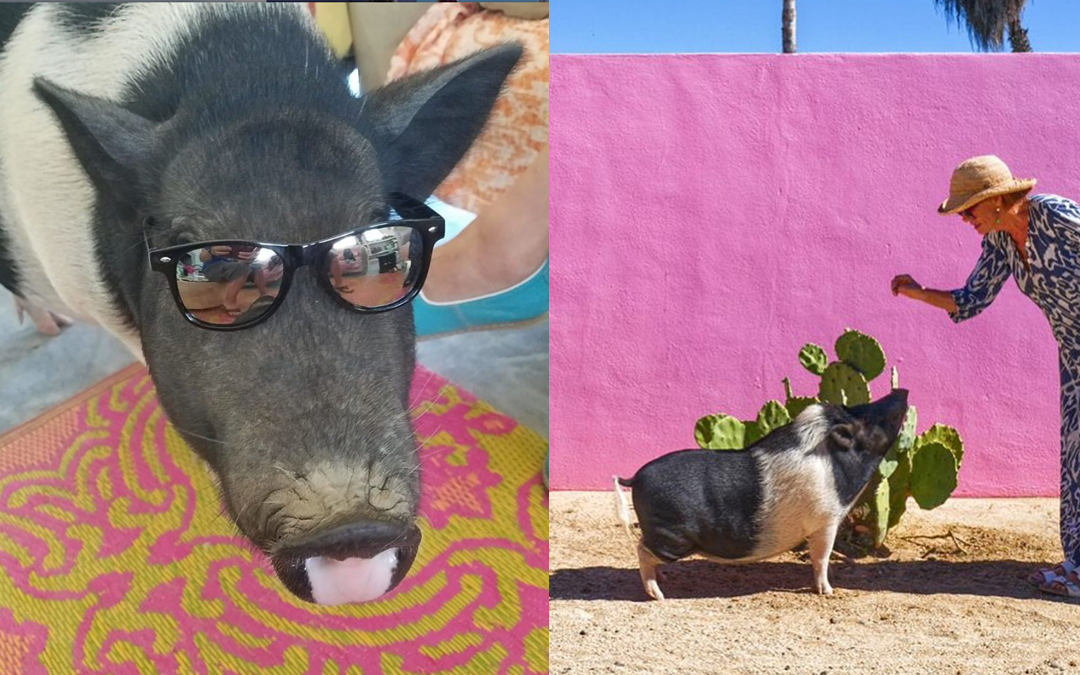 At a hotel called Hotelito in Todos Santos, Baja California, an unlikely artist is flourishing. Colette, named after a French novelist, is like a pig in mud. (Or in this case, fine art.)

For the past two years, She’s been living the high life near the famous Hotel California. Now a video artist who sometimes sprouts wings, she’s also a ‘piganthropist,’ donating contributions to worthy charities.

Colette the Artist Pig and a Magical Menagerie

Now, Colette the artist pig is enjoying a lavish pigsty with a chandelier and fine art furnishings. Amusingly, among the art is a famous 18-karat-gold toilet once shown in the Guggenheim.

Jenny Armit, the British immigrant who has called Todos Santos home for 17 years, lives near Hotelito. There, she has rescued many animals at the desert farm. Each of the menagerie of animals has a special part in Colette’s acclaimed short documentary film, accepted into the Mill Valley Film Festival.

Among the animals are a cast of characters:

In the film, Armit hilariously translates the world, as seen from Colette the artist pig’s perspective. (And with a British accent.) The result is a welcome relief from an otherwise stressful and chaotic 2020.

Newsweek put it this way:

“If 2020 is the year when anything can and has happened, couldn’t it be the year for a suspension of disbelief that a pig can be an artist? ‘Colette the Artist’ offers a downtrodden world hope that 2020 still can hold joy and possibilities.”

A World Where a Pig Can Fly

Colette’s artistic abilities thrived in the nurturing care of the caring people surrounding the menagerie. Now a video artist, she has explored Cubism, installation, and conceptual art. Unlike most pigs, she found a haven where her unique intelligence is recognized –and fully appreciated.

“She’s like a person with a personality. She’s very smart,” says Javier. Then he clarifies, “If there’s food involved, she’s extremely smart.”

Recommended Read: Meet Lulu – The Pot-Bellied Pig That Once ‘Played Dead’ To Save Her Dying Owner

Armit first recognized Colette’s potential, which Don Javier encouraged. Thus, he brought her paints and other mediums for self-taught experimentation. Newsweek even reports that he installed Wi-Fi so she could be exposed to works of art from all over the world.

In the artistic oasis recognized by Mexico as “Pueblo Magico,” Armit the interior designer and the animal lovers live in idyllic harmony. Aware of the dangers of the world outside, they’ve created a refuge. There, childlike innocence, humor, and a love for all things are cherished.

It seems in Todos Santos, a pig can truly fly. Imagination runs wild, and anything is possible, even a world-renowned aesthete who happens to be a swine.

“It’s an essential childlike quality you have to tap into in order to survive all this nasty stuff going on in the world,” Armit said.

Perhaps it shouldn’t be surprising that a pig could have an art appreciation, considering that we’ve seen other animals display such a predisposition? For example, for over 20 years, elephants have been producing abstract art.

At zoos and aquariums, animals are sometimes offered enrichment programs, allowing them to create with art supplies. According to ARTNews, the list of animal artists is bigger than one might expect.

Here are some of the residents of the National Zoo in Washington which participate in art enrichment programs:

Other animals create what could loosely be considered art:

Is Colette a true artist? You decide. However, her story reminds us to appreciate and respect all living creatures. What a better world we would live in if that were more widely understood?

Plus, as she attains international renown, Colette’s piganthropy, as she prefers to call it, helps those in her community struggling during the pandemic.

On her dedicated website, she promotes the Padrino Children’s Foundation. Thus, her story helps provide free health care, just as Armit and Don Javier offered her once as one lucky piglet.