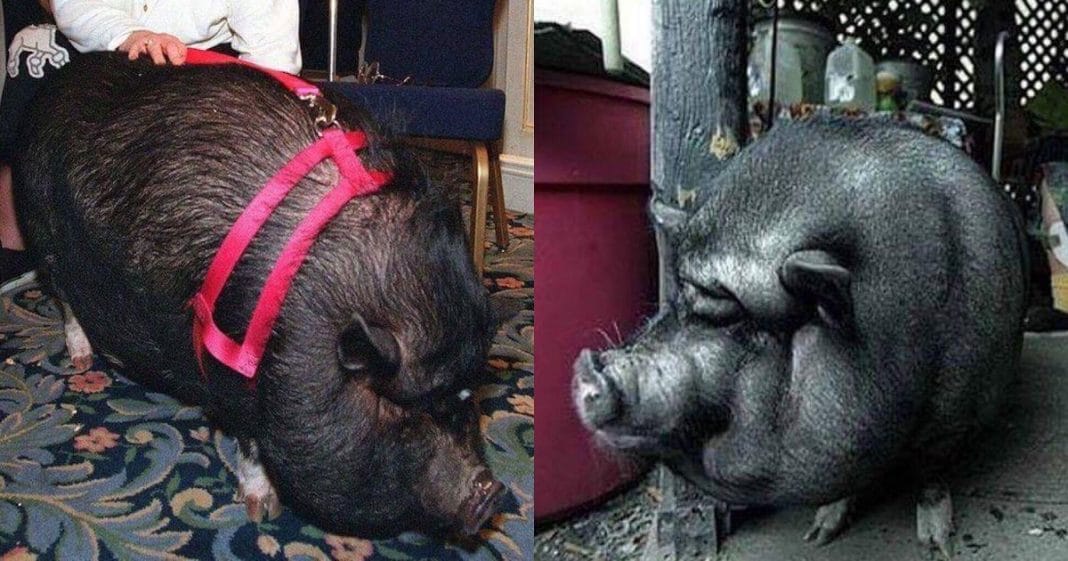 I don’t know why some folks underestimate the intelligence of animals. Dogs are used as service animals to help those in wheelchairs and to guide the blind. They are also trained by the military to sniff out explosives. Police use them too for pointing out drugs. They can be seen at airports exploring luggage and other items that might appear suspicious to the TSA.

Have you ever heard of a smart pig other than Wilber from E. B. White’s Charlotte’s Web? Meet Lulu, the Vietnamese pot-bellied pig who played dead to save her owner’s life.

Lulu rose to meteoric fame in 1998 when she saved the life of her owner by laying on the road in front of their camping trailer in Beaver Falls, Pennsylvania. This incident took place a year before, so Lulu’s fame took time to build.

Of course, if this happened today, Lulu would be a celebrity in a matter of weeks, perhaps even days. But since social media didn’t exist back in the late 90’s, it took a little while for her life-saving act to catch on.

Lulu formerly belonged to Jo Ann and Jack Altsman’s daughter, but the parents ended up adopting the smart pig. On August 4, 1998, Jack was out fishing on Lake Erie. The then 61-year-old Jo Anne was alone with Lulu and their dog when she had a heart attack.

No one else was around when she collapsed on the floor. She called for help. Jo Anne was able to throw an alarm clock out the vacation trailer window, but that didn’t achieve her purpose of getting anyone’s attention.

The couple’s dog bear, simply barked when she cried out. It was Lulu who on hearing her mistress’s painful calls, decided to act. The brave pig forced her way out of the yard. Her skin was left torn and bleeding. Lulu made her way to the center of the road; then she lay down in traffic..

Rather than stopping to investigate why a pig was on the road, some cars drove around the 150-pound Lulu. When a driver finally stopped, Lulu led him back to the trailer where Jo Anne waited.

To this day, with all the media coverage Lulu’s story received, this kind Samaritan hasn’t been identified. He noticed the scrapes and injuries to Lulu’s belly and cried out when he reached the trailer: “Your pig’s in distress.”

To which Jo Anne replied from inside: “I’m in distress, too,” she said. “Please call an ambulance.”

The man called 911 and summoned help. The ill woman was driven to beaver’s Medical Center where she was immediately taken to the operating room for open heart surgery.

The pig made headlines in USA Today and People Magazine. News organizations and TV shows the world over covered the story. From Italy to Australia, the UK to Brazil, Lulu appeared on TV screens.

That’s not all. Lulu was featured on many of the most popular TV shows in the United States at the time: National geographic’s Fast Animals; “Regis & Kathie Lee Show.”; and the “Late Show With David Letterman.” She appeared on the same episode as actor George Clooney.

George told Oprah he knew of a smarter animal than the dog who used a MAC machine to help its paraplegic owner. Oprah was so impressed she sent a private jet for Lulu, Jack and Jo Anne to fly to Chicago to appear on her show.

Lulu was awarded the much-coveted Tiffany gold hero’s medal from the American Society for the Prevention of Cruelty to Animals. She was the guest of honor at the Mayflower Hotel for the ceremony. Well-renowned actress, Elizabeth Taylor was in attendance. She joked with Jo Anne about the evening. It was “the only time I’ve been in a room when all the photographers took pictures of another woman.”

Lulu also appeared on the Discovery Channel and Animal Planet. Former “Tonight Show” host, Jay Leno offered to provide Lulu with her sleeper train car when they traveled to the west coast to appear on his show. Jack and Jo Anne declined his generous offer.

All that mattered to the couple and Lulu was their continued affection for one another; for Lulu, this might include a jelly doughnut or 3 a day. And why not? She did save Jo Anne’s life.