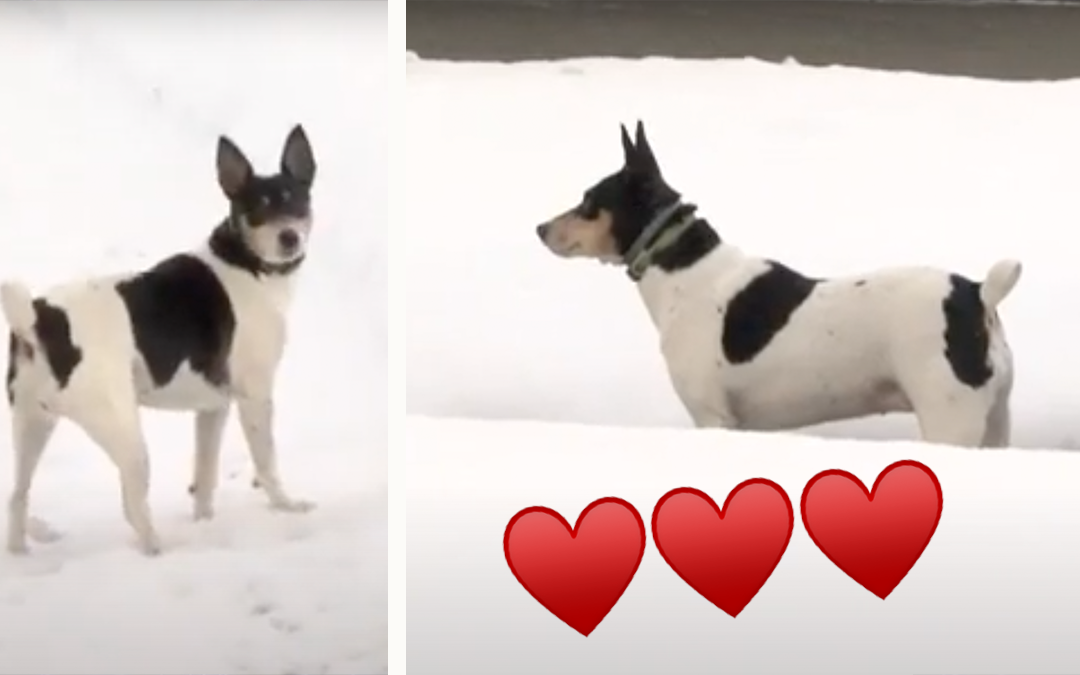 A rat terrier named Lyric abandoned along a roadway was rescued by a kindly man. Then, days ago, the little dog went on to save a man from possibly freezing to death. As a result, the City of Little Falls, NY named her their Official Dog.

Thanks to her heroic gesture, Lyric may visit any fire hydrant in the city. Plus, she will receive treats anytime she likes at the local Firehouse.

“I guess you never know what would have happened. It was certainly a cold night,” said Mayor Mark Blask. “Lyric was on the spot to help. That’s really the bottom line. In our eyes in the City of Little Falls, Lyric is certainly a hero.”

During a brutally cold winter and pandemic, it’s an uplifting story that left the community smiling.

Once Abandoned Along a Roadway

About four years ago, someone abandoned the rat terrier named Lyric along the road.

“The people that found her and brought her in found her along the side of the road all ripped up,” he said.

Fortunately, she ended up at the Steven-Swan Humane Society. After over a year, John Nemcek got to know her and decided to bring her home.

Before that, two other families adopted her but returned her due to her behavior, which was considered “feral,” reports the Times Telegram.

Fortunately, Nemcek took her to her forever home at a complex for seniors in Rockton Plaza. There, she became a mascot to the residents, often stopping to let people pet and admire her.

Related: Pregnant dog who had ear cut off and was shot 17 times has now qualified as a therapy dog

An Underdog to the Rescue

Last week, Mr. Nemcek took Lyric out for a walk to “do her business” at night. All around, heavy snowfall blanketed the ground and Nemcek stayed behind as she bounded into the snow.

Along her usual route between two churches, Lyric went up to a spot and wouldn’t move. In the distance, Nemcek saw something that appeared like some trash bags.

“She stood there for I’d say a good two, three minutes, just frozen,” he recalled. “And I said, ‘What the heck is going on with her?'”

Unfortunately, he couldn’t go through the snow to see for himself due to mobility issues. Then, a woman came by, so he asked her if she could see what it was. Alarmingly, she replied that it looked like a person and continued on her way.

Then, Nemcek decided to call out and heard a voice.

After calling 911, two police officers discovered a man who had fallen in the snow and couldn’t get up.

Fortunately, the man was ok, and the officers helped him back up and to his room in the building. Later, he couldn’t recall how long he had been lying there.

Due to knee problems, he used a cane, but the heavy snow made it impossible to move at all. With temperatures in the teens that night, he may have been frostbitten or died if not for Lyric’s behavior.

“If she had done her normal thing, I never would have looked up,” Nemcek said.

Thankfully, the rat terrier saved the man, who had fallen on a sidewalk. Even during the daytime, it would have been difficult to spot him in the snow so far from the main building.

“I think there was a good chance that he would have lay there all night, because like I said, it was a very, very bad night, and this during the winter doesn’t get much traffic to begin with,” Nemcek told WKTV.

Related: Man recovering from an operation wakes up to cat snuggling him – he doesn’t own a cat

The Official Dog of Little Falls

Now, the Mayor has given Lyric the title of Offical Dog of Little Falls. As such, she gets the perks of full access to any fire hydrant she likes. As noted, the Fire Station will always welcome her with treats when she stops by.

Besides, Mayor Blask says that she will get another perk:

“Lyric is also fortunate that she lives around the corner from Councilman Dan Carter. Lyric has permission to sniff Dan whenever she pleases.”

Now, she’s a celebrity all over the city and soon, across the internet.

“If you see Lyric out and about with John, please congratulate her on her new title and save a man’s life,” the Mayor wrote on Facebook.

Certainly, we congratulate Lyric and John Nemcek for what they did that day!

Something to Smile About

In response, the community showed an outpouring of support and appreciation for the rat terrier named Lyric.

“I am one of the lucky ones who know Lyric personally; I always knew she had it in her for greatness,” wrote one person.

“I think Lyric’s owner, John, along with his dog, had quite a bit to do with the rescue of the man who had fallen between buildings! You’re as much a hero as Lyric, John, for taking her cue and quickly following up on the man’s rescue! Thanks for your good deed and for giving us all something to smile about in these pandemic days.”

As WKTV suggests, “If you happen to like Lyric’s story, there are plenty of other animals waiting for their stories to be told at the Stevens-Swan Humane Society. To see all of the pets available for adoption, click here.”

On Facebook, the Humane Society shared Lyric’s story and said:

“This is a truly amazing story, and we are proud to say that Lyric was adopted from our shelter a few years back. Way to go, Lyric!! Rescue dogs are simply the BEST!!”

See the heartwarming video from WKTV News Channel2 below: