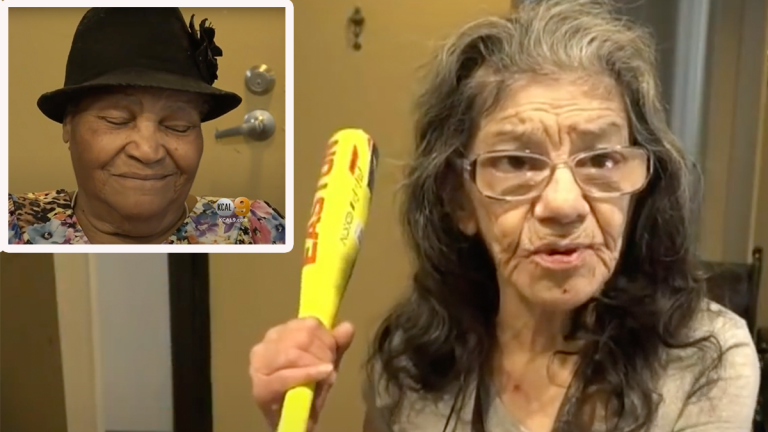 An intruder made the mistake of his life when he messed with a self-described ‘Lady Ninja’ in Fontana, California. He may not have expected resistance, but wow, did he get it. Although she’s under five feet tall, 67-year-old Lorenza Marrujo has 26 years of martial arts training. (See video at the end of this article)

Marrujo stands 4-foot-11 and weighs 100 pounds. Although you might not know it by appearances, she’s a Black Belt in jujitsu.

Related Read: He Wants To Dance But Dad Makes Him Do Martial Arts Instead. Years Later He Learns Why

On Monday, Sept. 28, the intruder, reported as 59-year-old Donald Robert Prestwood broke into Marrujo’s apartment. According to police records, he is 5-foot-10 and 170 pounds.

When he decided to enter her apartment, she was ready and willing to defend herself.

“Back off, or I will have to hurt you,” she recalls telling him, and he promptly left.

Then, the intruder decided to break into the neighbor’s apartment downstairs. There, he found and allegedly assaulted 81-year-old Elizabeth McCray. She says he grabbed her and threw her to the floor as she screamed.

That’s when Marrujo jumped into action for her friend, who she calls “Mama Liz.” First, she called 911 and entered the dark apartment. Using the flashlight on her phone, she discovered Prestwood standing over McCray.

Using a cane, she was able to get the man off her friend.

“I squeezed myself between her and him,” Marrujo said. “I put mama on the side, and I jumped on him, and I was punching him and everything, and I had the cane against his throat.”

At that point, the intruder tried to get the upper hand, but Marrujo knew exactly what to do. Soon, he was begging for mercy.

‘You Had No Right to Hurt an Elderly Person!’

Marrujo described what happened next:

“He lifted up and tried to twist my hand, but at the same time, I twisted his and turned it around real fast, and he was saying, ‘You’re hurting me, you’re hurting me,'” Marrujo said. “And I said, ‘I don’t care. I don’t care what happens to you. You had no right to hurt an elderly person.'”

McCray says she was shocked by her friend’s bravery and concerned about what might happen next. However, Marrujo was confident she had the situation under control.

“I didn’t expect that little lady would be that brave,” McCray said of her friend. “I said, ‘Could you be careful, he’s gonna kill us.'”

Later, McCray said she believed her friend had supernatural powers that night.

“Jesus was here and gave her power,” McCray said. “I wouldn’t think a little lady would have the power to do this.”

The Black Belt kept one knee on Prestwood’s chest and one on his neck, holding his mouth with her hand. Fortunately for him, the police arrived and took him into custody. As for McCray, she went to the hospital for treatment and went home the following day.

Although Marrujo was certainly heroic, the Fontana police advised that people should avoid responding physically. Instead, they recommend calling 911.

Related Read: 911 Operator Gets Call From Terrified Teen Girl Hiding In Closet, Then Tells Her To Tap Secret Code

Jennie Venzor, a spokesperson for the Fontana Police Department, said that while Marrujo was courageous, it’s preferable not to engage an attacker who could be armed.

“We recommend that you dial 911 for emergency assistance, which, in this case, she did that, and she also jumped in,” Venzor said. “What she told me is that her training kicked in, and it was like a muscle memory. She knew she had to help her friend out.”

‘The Master of Assassination’

After the experience, Marrujo told the Sun, “I’m the master of assassination,” when it comes to her martial arts skills. Although she managed to subdue Prestwood, she now says she might have gone farther.

“I would have done more damage to him,” she said.

From the early 80s to 2007, Marrujo trained in martial arts as she planned to become a crime scene investigator. During her training sessions, she enjoyed listening to the song “Eye of the Tiger” from the action movie, Rocky III.

“I needed it in case I had a close encounter of the bad kind,” Marrujo said. “I prefer to be called Lady Ninja.”

As for Prestwood, the Sun reports he was arrested on suspicion of elder abuse and held at West Valley Detention Center in Rancho Cucamonga in lieu of $150,000 bail. Later, he pleaded not guilty to the charge.

See the video from CBS Los Angeles below: