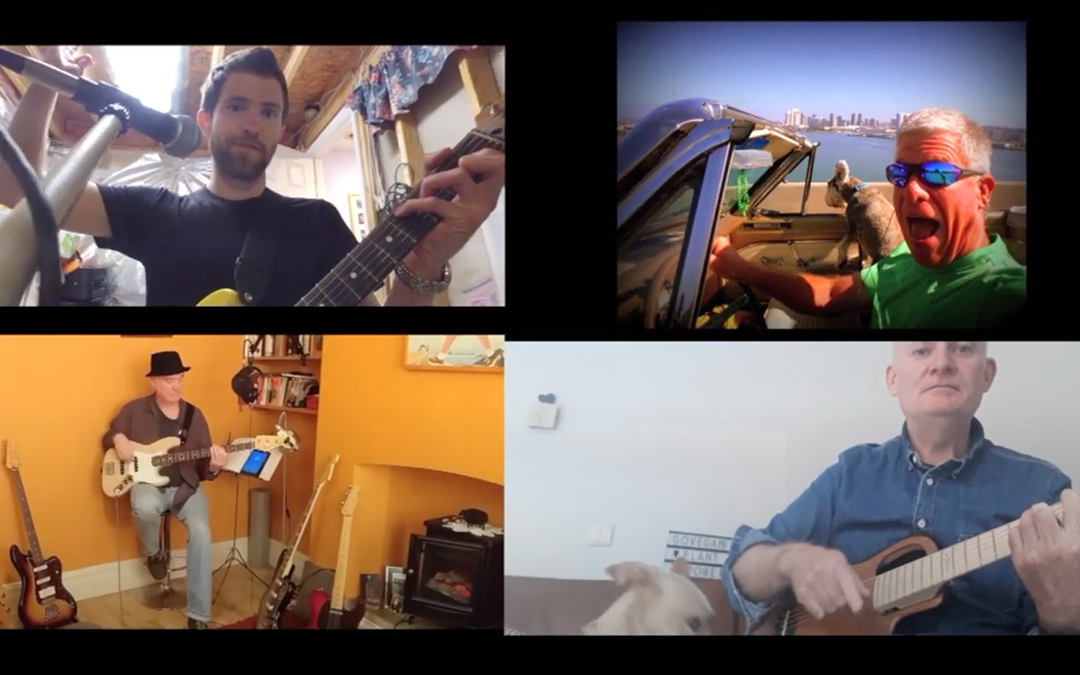 Paul O’Sullivan, 33, had a friend who once met another man sharing his name for lunch after meeting on Facebook. Then, years later, he decided he might give it a try.

One day, he decided to send friend requests to some of the other Paul O’Sullivans he found. Would they share some common interests, or would they be completely different?

“One night, I was kind of just indiscriminately adding Paul O’Sullivans on Facebook, and a good amount of them accepted my friend request,” O’Sullivan told CBS News.

After three of the other Pauls accepted his friend request, he started learning about them in his newsfeed. Interestingly, the other Pauls were also accomplished musicians.

“You know, it kind of felt like the universe was daring me to do something with this serendipitous scenario,” he told CBS.

Then, Paul came to the inevitable conclusion:

“I thought, ‘we should start a band.’ It was the natural next step.”

Soon, the Paul O’Sullivans would get to know one another. However, how would they be able to tell each other apart? First, they would need a nickname, so Paul started using the name of the city they lived in to differentiate the Pauls.

Originally, Paul, 33, was born in Baltimore, so he became Baltimore Paul. In the band, he plays vocals and guitar along with Rotterdam Paul.

The other Pauls were named:

Next, they had to come up with a band name, and it was a no-brainer: The Paul O’Sullivan Band.

Playing During a Pandemic

Since the four name twins lived so far apart, they started off meeting virtually in 2016. However, daily life kept them busy without much time to play. Then, this year, the COVID-19 pandemic suddenly left them with ample time for practice.

Thus, Paul O’Sullivan Band got off the ground, and they started working on their first album. Fortunately, they were already familiar with social distancing and collaborating remotely. So far, only Baltimore Paul and Pennsylvania Paul have met in person after quarantining.

“So many doors had closed because of covid, and yet, Baltimore Paul had already opened this door for us, so it was so easy to walk through,” said Pennsylvania Paul. “From that, we sort of developed our ethos, which is: ‘If it makes you smile, lean into it; if it makes you dance, embrace it; and if it does both, it’s the Paul O’Sullivan Band.”

During a very bleak time, their collaborations gave them something to look forward to each day. Even though they are of different ages and thousands of miles apart, they shared their love for music.

During the worldwide quarantines, it helped them feel less alone.

“Once COVID came, so many doors had shut on musicians,” Pennsylvania Paul said. “And [Baltimore] Paul opened up this door already, right? Then we had an extra purpose.”

Thus, their serendipitous meeting came at precisely the right moment. By 2016, the band released their first single, “Namesake.” In the video, Baltimore Paul discusses the idea of cloning himself to find “one other person out there on the same wavelength as me.”

See the catchy video with a pop-punk/power-pop sound below:

Each of the Pauls records their part of the music individually on an “assembly line” since ZOOM often lags. Then, their parts come together for the final track. Somehow, it all works as if they played together for years.

While they play on their own, they can imagine they are together.

“I close my eyes and think we’re in the studio playing together. Just trying to imagine that we are together is a good feeling,” said Rotterdam Paul.

Although each of the Pauls has their unique skills and personality, they compliment each other as if it was meant to be.

Baltimore Paul says he felt like he’d known Pennsylvania Paul his whole life. When they met, they were both wearing a flannel shirt and jeans.

“Given that the album was recorded remotely from four locations, “I’m so surprised by how cohesive it turned out,” said Baltimore Paul. “It’s kind of funny how easily it came together, when you trust in those serendipitous situations.”

Now, the four Pauls feel like they are “brothers for life” and look forward to coming together after the pandemic. Already, they’ve released their debut EP, “Internet Famous: A Retrospective.”

On the EP, they cover songs “that became famous [or more famous] as a direct result of the internet,” as an homage to how the band came to be, according to Baltimore Paul.

Somehow, the musicians seem meant to play together.

“I think people see us as a cute headline in the news. But to me, the real story of our band is the inexplicable musical chemistry between us. I’ve played in a lot of bands through the years. You either vibe with someone, or you don’t. For whatever reason, there’s a certain Je ne sais quoi when we collaborate,” Baltimore Paul told American Songwriter.

Although it’s tempting to reach out to people sharing your name online, he warns others about meeting manipulative or dangerous people online. As always, the internet can often be dangerous, and meeting strangers isn’t advisable.

“If you must, please exercise caution—and never meet a stranger in person, unless there are a bunch of other people around,” says Baltimore Paul.

However, Rotterdam Paul says he’s glad he made the “virtual jump to meet and do new and exciting things.”

Fortunately, it worked out spectacularly for these musicians. These unrelated men from different generations and geography formed genuine friendships and started making some great music together.

Artists of all kinds have been so creative and inspiring for us this past year. We owe them our thanks for helping us get through dark days and reminding us of the joys of life and that we’re still together.

More from the Paul O’Sullivan Band below: