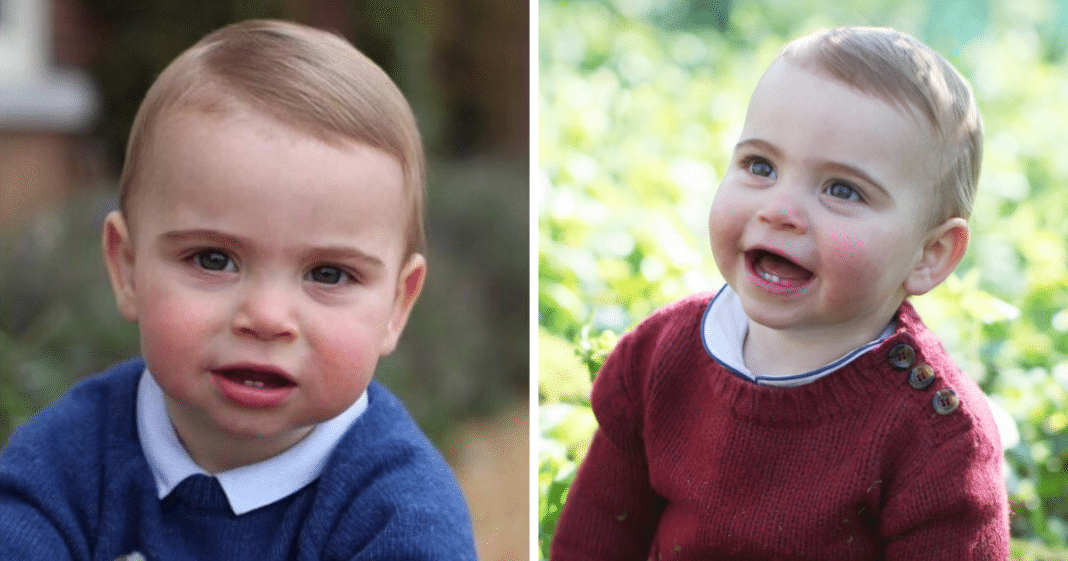 Britain’s youngest royal, Prince Louis of Cambridge, turned one on Tuesday, April 23. Kate Middleton celebrated the occasion by releasing three new photos of her youngest child. The title of the youngest royal will soon shift to the Duke and Duchess of Sussex, who are expecting their first child any day now.

Kate Middleton, 37, has demonstrated her excellent photography skills, sharing pictures of the family’s three children for birthdays and special occasions. This time, she shared shots of Prince Louis taken earlier this month at Norfolk, Anmer Hall, the country home she shares with Prince William, Prince George, 5, and Princess Charlotte, age 3. Charlotte will turn 4 on May 2.

“Two snaps show him in a red sweater with buttons on the shoulders over a bodysuit with a peter pan collar by Amaia paired with navy shorts and knee socks also by the kids brand, styles often worn by Prince George as well.”

“The little royal also wears a blue sweater from Trotters featuring a puppy – recalling the striped whale sweater that George wore in the portraits released in honor of his third birthday in 2016.”

Prince Louis seems as happy as he can be as he sits on a mossy sunlit patch at the country home. His smile shows off two new teeth and the chubby rosy cheeks he shares in common with his royal siblings.

The Duke and Duchess of Cambridge are delighted to share these new photographs of Prince Louis ahead of his first birthday tomorrow ? The photographs were taken earlier this month by The Duchess at their home in Norfolk.‬

Another photo in the stylish sweater shows Prince Louis playing in the grass with bits of the plants all over his sweater. He appears to be having lots of fun hamming it up for his mother the photographer. 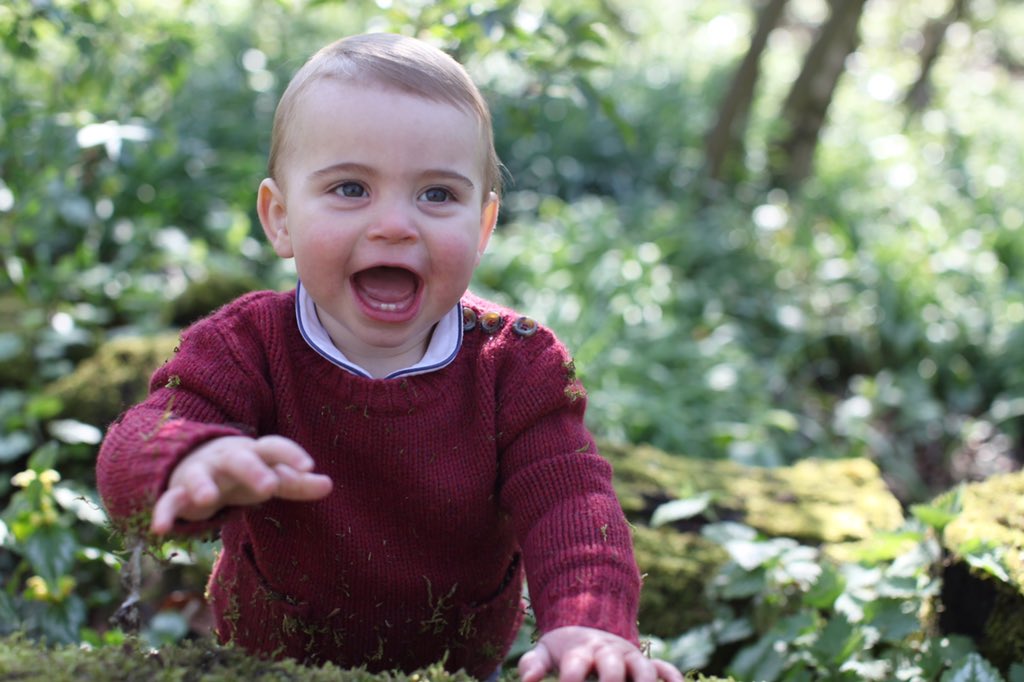 In another shot, we get a more serious inquisitive expression but his blue sweater shows a light-hearted spotted puppy. We’re sure the Queen would approve of the design as this dog looks similar to Vulcan and Candy, the dachshund-corgi mix dogs called dorgis that the Queen owns. Prince William and Kate own a larger black English Cocker Spaniel named Lupo.

Happy Birthday Prince Louis! ? The Duke and Duchess of Cambridge are delighted to share this new photograph of Prince Louis ahead of his first birthday tomorrow.

The public got their first glimpses at Prince Louis in photos taken by the Duchess on Princess Charlotte’s third birthday. In those shots, Louis wears the white jumper worn previously by Princess Charlotte in her first official photos from 2015. Charlotte wore a blue cardigan previously worn by Prince George at Queen Elizabeth II’s 90th birthday celebration.

This image of Prince Louis was taken by The Duchess of Cambridge at Kensington Palace on 26th April.

The Duke and Duchess would like to thank members of the public for their kind messages following the birth of Prince Louis, and for Princess Charlotte’s third birthday. pic.twitter.com/bjxhZhvbXN

The photos of Prince Louis look almost identical to his father, Prince William when he was an infant.

Little Prince Louis is just like his father ❤️ pic.twitter.com/9Xnvq8m33s

An interesting sidenote: Prince William was the first direct heir to the British throne to have been born in a medical ward. Decades later he introduced his first son George to the world on the same hospital steps where he was born.

Before him, the direct heirs were subject to an ancient, royal birthing protocol. Queen Elizabeth II’s home birth had to be witnessed by a government minister “over fears a potential heir to the throne could be swapped out for an imposter.”

Now Prince Harry and Meghan Markle will have a private home birth close to their home in Windsor, where they married last year. The highly anticipated first photos of their newborn might appear first on their newly established Instagram account.

Two days ago, their Instagram shared a picture to celebrate Queen Elizabeth’s 93rd birthday. This has definitely been a good year for the Royal Family.

Wishing a very happy 93rd birthday to Her Majesty The Queen! Credit: ?PA