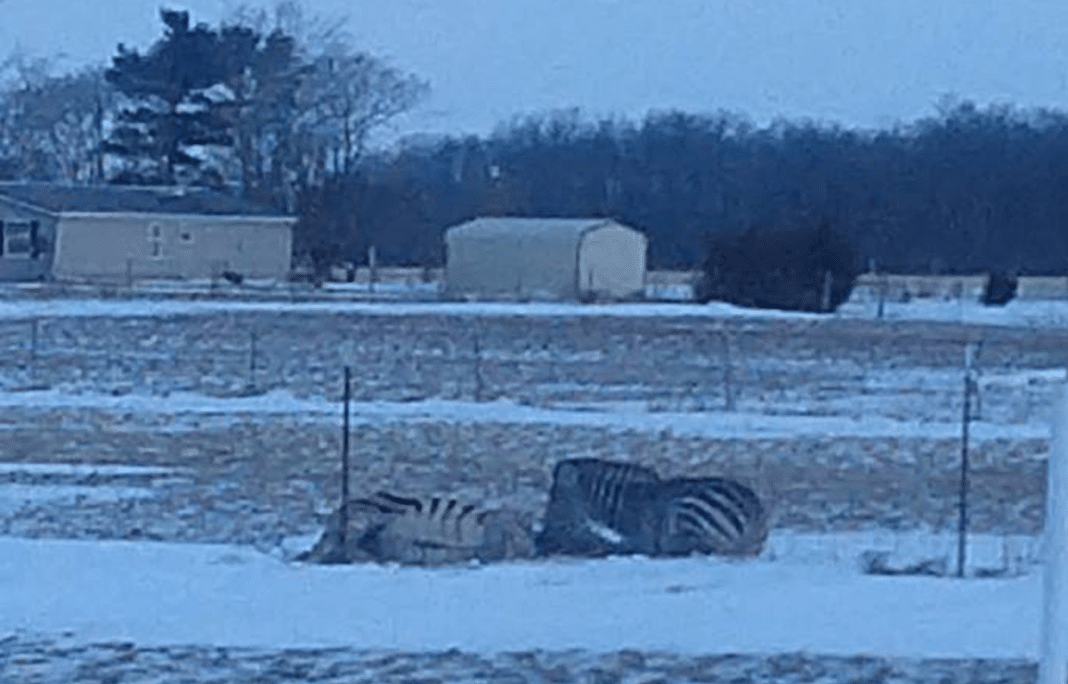 Stories of animal neglect are coming in across the country as the temperatures are freezing in many states. Law enforcement has issued warnings after finding dogs frozen solid. Now it appears that the owner’s of exotic animals at a Pittsburgh, Indiana area farm are facing scrutiny after a zebra was found frozen to death on their property. Another zebra survived but appeared to be lying close to its fallen friend.

Carroll County Indiana resident Sonya Kendall discovered the zebras and captured photos of the scene. She reported the incident to authorities on Wednesday morning as well as journalists at The Hill.

According to the Hill report:

“[Kendall] hopes the incident brings more awareness to what she is calling an instance of mistreatment by the local farm of their animals.”

“Indiana laws need to do more to protect animals,” Kendall said while adding that she believes the state needs “stricter regulations on exotic animal ownership [and] more specific language in the laws that outline what is really adequate and safe shelter, especially in extreme weather situations.”

Zebra freezes to death in Indiana after hooves get stuck in fence amid extreme cold temperatures https://t.co/4lDcjqFEmv pic.twitter.com/n1RAj7xO7V

WLFI news reported that Kendall’s Facebook post stated the zebras weren’t wearing any kind of blanketing and that the second zebra was moved to another property shortly after her reports.

According to Fox59 news, Kendall said the shelter available to the zebras was:

“a carport with open ends.”

Carroll County Sheriff Tobe Leazenby consulted with a veterinarian from the State Board of Animal Health to determine the cause of death. They determined that the zebra died after getting its hooves stuck in the fencing. Unable to get away, it panicked and inhaled frozen air, which crystallized in the animal’s lungs. Internal damage resulting from the ice crystals was fatal.

The Sheriff determined that the animals had access to warm shelter, food, and water. Leazenby will submit a report to the Carroll County Prosecutor’s Office, who will determine if this was a case of animal neglect.

The property is also home to kangaroos, which Sheriff Leazenby found safely inside a shelter. He said that the area has seen less than 10 calls reporting animal abuse due to the extreme cold in the state.

“[Sheriff Leazenby] also confirmed that the other zebra has been moved and that the owners are going through more measures to ensure the rest of their animals remain safe,” reported WLFI news.

According to Newsweek, the town was so cold on Wednesday, that the courthouse had to be closed.

When it’s this cold, it’s not safe for pets to be outside for prolonged periods, much less exotic animals. If you witness animal cruelty, you can call local law enforcement, your local animal control agency, the Humane Society, or the Anti-Cruelty Society at 312-644-8338.