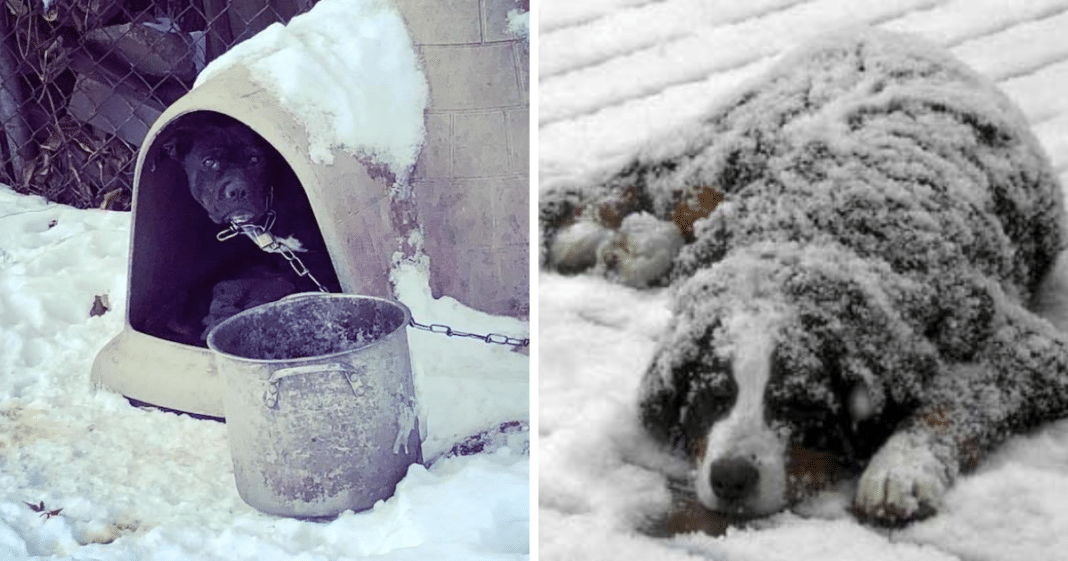 The icy grip of winter is taking hold across America, creating dangerous conditions for all, including vulnerable pets, left outdoors. Defenseless and unable to get to shelter these animals’ only hope is for someone to save them. Fortunately, new laws and awareness about the need to “bring them inside” are saving the lives of some dogs and cats. If neglectful pet owners don’t do the right thing out of compassion, then perhaps they will if they face charges and fines from police.

On January 25, 2019, CBS Chicago reported that Chicago was colder than some parts of Antarctica or Iceland. That Friday, the temperature slid down to just 2 degrees Fahrenheit. With wind chill factored in, the temperature felt like negative 16 degrees. Meanwhile, near the south pole, the temperature was a balmy 34 degrees.

It was the day before this icy day in the Windy City that police found a dog without identification tags. The dog was shivering in a backyard inside a makeshift igloo shelter. He only had some frozen clothes for warmth. A cable tied him to a tree, so there was no escape from a certain slow and agonizing death.

“His feet were so cold he couldn’t touch his paw pads to the ground.”

This time, the dog’s life was saved thanks to a new amendment in the law which allows police to take pets into custody when they find them in distress. Before the change to the state law, people who left pets in the cold could be charged with a misdemeanor for animal neglect. They could face fines up to several thousand dollars, but police were unable to seize the animal. Now, their hands are no longer tied.

Please do not leave your pets outside in the cold. If you suspect someone is mistreating a pet or has left them out in…

“I think it’s huge because it gives law enforcement officials the tools they need to save the pet,” Klehm said. “Their hands were really tied before the amendment to that law.”

See what happened the video from CBS Chicago below:

Thanks to a new law in another state, Pennsylvania, animal abusers could face felony charges for leaving their pets outside in freezing or hot temperatures. Libre’s Law was named after Libre, a 7-week-old puppy found hours from death on a Lancaster County farm. The puppy was found emaciated, dehydrated and barely breathing inside a cage. A humane officer rescued Libre, Spanish for “liberty,” on Independence Day in 2016.

The disturbing video below shows Libre immediately afer he was rescued:

Dr. Pryor was very pleased that he enjoyed some wet canned food this am.

The tiny Boston terrier or boxer mix was slowly nursed back to health. His story sparked international outrage and motivated state lawmakers to strengthen laws to protect animals from neglect. Governor Tom Wolf and Libre’s rescuer and owner, Janine Guido, looked on as Libre stamped his pawprint on his namesake legislation on June 29, 2017.

Before Libre’s Law, there were no rules on how long animals could be left outside in the cold. Afterward, pet owner’s could face charges if they leave their pets out longer than 30 minutes in freezing temperatures below 32 degrees or in hot conditions higher than 90 degrees. Humane officers can determine if the charges will be a summary offense, a misdemeanor, or a felony.

One Pennsylvania shelter worker told WNEP, an ABC affiliate, that she still sees dogs left outside in the cold.

“I see a lot of animals that are tied out and they’re sitting out there in the cold. People can’t understand, they can’t speak for themselves, they can’t tell you, ‘my paws are hurting,'” said Meg Phillips.

Going about our busy daily lives, some people forget how long their pet has stayed outside.

“A lot of people, what they do is they put them out, they go in and maybe they’re doing the dishes, maybe they’re taking care of a child, or interested in some sort of TV show, they’re not realizing how long they’re actually leaving them out there.”

The new legislation won’t prevent every case of animal abuse but will give authorities more power to rescue suffering animals. Ashley Mauceri, from the Humane Society, advises anyone who witnesses cases of animals left outside in the cold or heat without adequate food and shelter to contact law enforcement.

“Especially in these cold months, it is important for people to bring their pets inside and for others to report neglected animals to law enforcement,” said Mauceri.

“If you see a pet left out in the cold, speak out.”

There are laws in place in every state to protect animals. If your state doesn’t have a specific law about leaving animals in the cold, remember that animal neglect is considered a misdemeanor crime in all 50 states and Washington, D.C. Visit the Humane Society website for more information and advice for keeping pets safe in the cold.