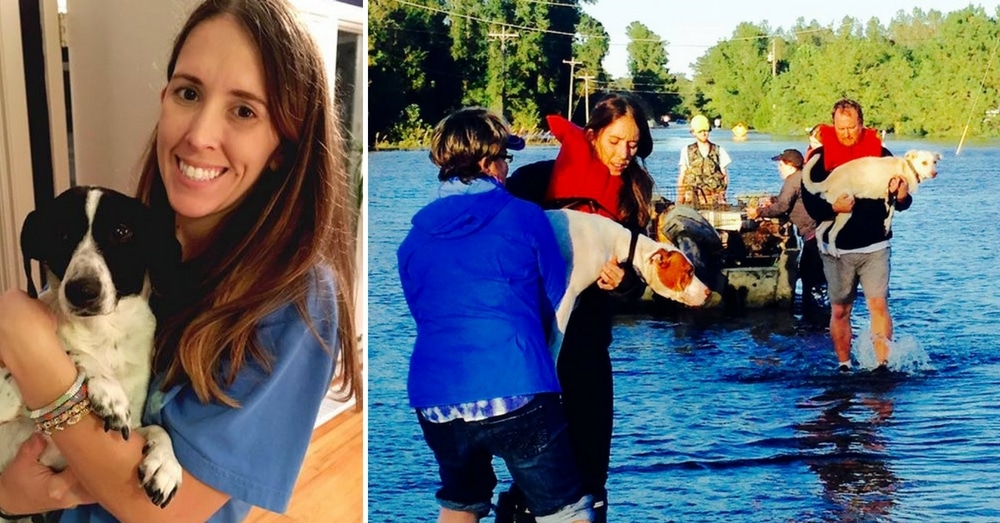 Even with all of their schooling and experience, it can be hard for meteorologists to predict exactly what the weather will do.

Such was the case when Hurricane Matthew ripped through the southeastern United States. Some areas that were warned to evacuate hardly saw any damage, while other areas that thought they would be safe were hit hard.

Pinetops, North Carolina, was one of the latter. They were expecting only a few inches of rain, but ended up getting hit with intense flooding that left houses half-submerged and forced many to flee.

As residents evacuated they were often forced to leave their beloved pets behind, told they could only take small dogs with them and had to leave larger dogs and cats at home.

Thankfully, the pet owners of Pinetops have a hero in Alex Layton.

Alex fosters rescue animals in the area and volunteered, along with several others, to go back and rescue the animals that had been left behind.

The work was far from easy. Alex had to guide her small boat down the streets searching for the frightened animals. Some families had given her keys to their houses so she could get in, but at other homes she was forced to crawl through windows and shove open doors in waist-deep water to get to the abandoned pets.

Alex said they usually found the animals at the highest spots they could get to in the house. Speaking of one family of cats they rescued she said, “They were on the highest parts of the house. Above the kitchen cabinet; on the back of the sink. It was pitiful.”

Thanks to Alex and the other volunteers, 27 dogs, four cats, one horse, and one chinchilla were rescued. Many of them were wet, cold, and hungry, but they were all taken to get checked out at the local animal shelter, and thankfully all of them are now out of danger.

All but six of the animals have since been reunited with their owners who were more than grateful to Alex for saving their precious pets. The animals who are left are staying at the local humane society and Alex’s own house while the town works on getting back on its feet.

If you would like to help the people and animals of Pinetops and other areas affected by the hurricane, you can donate to Wilson County Humane Society or one of the many relief projects that have been started on GoFundMe.

Were you glad to see these animals get rescued and reunited with their owners? So share this!