He Watches Heartbroken Mama Cow Collapse In Field After Baby Calf Dies, Refuses To Leave Her Side 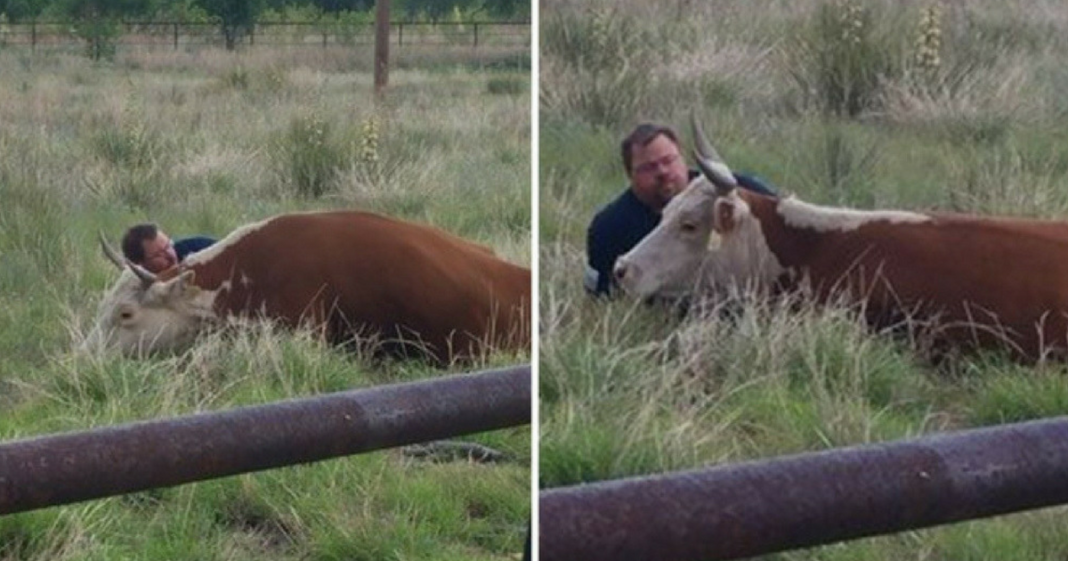 Many people think animals are just dumb creatures with no feelings or emotions, but anyone who has spent any time with an animal knows that is just not true. Many animals feel happiness, anger, jealousy, and pain, much in the same way we do.

Benjamin Tipps witnessed this firsthand when he was visiting family on Mother’s Day.

A cow in a nearby field had been in labor for several days and was struggling with the birth. As Benjamin watched, the cow collapsed into the grass.

He rushed over to see what was going on and when he got closer his heart broke. The sac holding the calf had burst, resulting in it being stillborn.

As soon as the mother cow realized her baby was dead she became sad and withdrawn. Benjamin’s heart broke for her and he knew he couldn’t leave her side while she mourned.

Benjamin’s wife, Kayla, captured the sweet moment when her husband laid down in the grass next to the cow to console her.

“She was crushed — just devastated, and she was tired from the labor,” Kayla said. “She laid down, and Ben laid down and was kind of massaging her and comforting her.”

A Texas man laid down next to this cow on Mother’s Day to console her after losing her calf. >https://t.co/DMH6fpdlHF pic.twitter.com/R2wGEnSJHu

“What a great heart this man has,” Kayla wrote when she posted the picture. “This momma cow lost her baby yesterday and Benjamin laid with her and petted her to try and comfort her. Such a sweet yet heartbreaking picture.”

Thankfully the cow’s heart is mending and she is doing much better now, but that hasn’t stopped people all over the world from sending their condolences. Thousands were touched by Benjamin’s tenderhearted actions.

“What a caring, loving person,” one person wrote. “I needed to see that and be reminded of the gentleness that can still exist in humanity.”

We can all learn a lesson from this kind-hearted man and be mindful to show others a little more kindness and compassion.

Was your heart touched by what Benjamin did for this heartbroken cow? So share this!