Waitress Nervous To Wait On Texan ‘Cowboys,’ Then They Write Note On The Bill 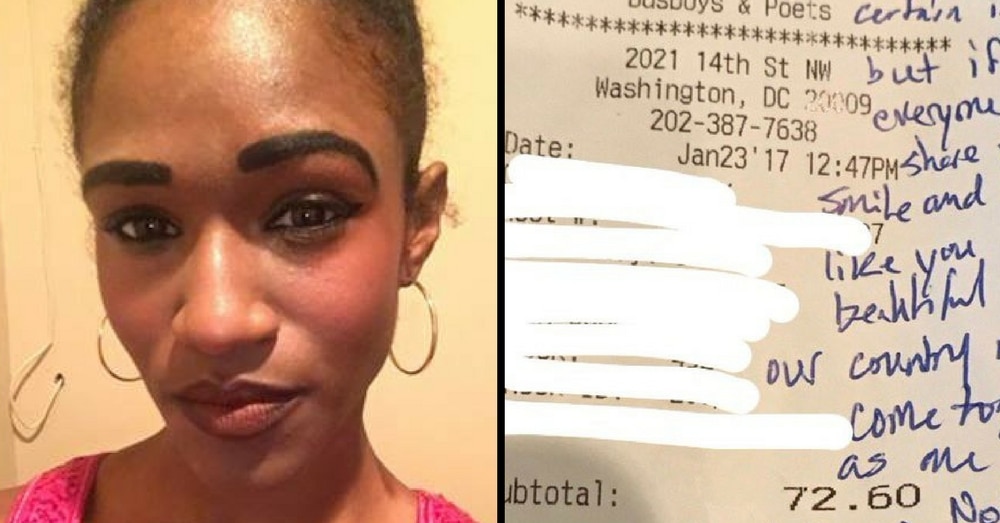 It was a situation that could have ended very badly. Washington D.C. waitress Rosalynd Harris, who is black, found herself waiting on a table of Texan cowboys who had come to town for the inauguration. Rosalynd herself had just participated in the Women’s March.

They were obviously coming from two very different ideologies, and it would have been understandable if things were tense, but amazingly it was just the opposite!

After the men left, Rosalynd looked at the check, and what she saw made her jaw drop to the floor. The men had left a $450 tip on their $72.60 bill!

Along with the tip was a note which read:

“We may come from different cultures and may disagree on certain issues, but if everyone would share their smile and kindness like your beautiful smile, our country will come together as one people. Not race. Not gender. Just American. God Bless!”

We rise by lifting others. A lovely act of kindness pic.twitter.com/S01SV3w8ts

“You automatically assume if someone supports Trump that they have ideas about you,” she said. “But (these men are) more embracing than even some of my more liberal friends, and there was a real authenticity in our exchange. This definitely reshaped my perspective. Republican, Democrat, liberal are all subcategories to what we are experiencing. It instills a lot of hope.”

The restaurant where this inspiring exchange occurred, Busboys and Poets, is a socially progressive restaurant and artist’s lounge that describes itself as “a community where racial and cultural connections are consciously uplifted…a place to take a deliberate pause and feed your mind, body and soul…a space for art, culture and politics to intentionally collide.”

They “believe that by creating such a space we can inspire social change and begin to transform our community and the world.”

The interaction that Rosalynd had with the cowboys that day fit perfectly with the mission of the restaurant and has proved to many that true peace, harmony, and understanding is possible between people with very different views and beliefs.

“We all have the American spirit,” said Jason White, the man who left the tip, “and it’s really our duty to make America great ourselves—not one person. And that’s by respecting and loving one another, no matter how much we disagree with them.”

Rosalynd said she had been needing to move to a new apartment and was worried about how she would afford the initial fees. This tip, she said, has taken a huge weight off her shoulders.

Hopefully more people will see this story and be inspired to follow suit. Love and hatred are both choices. Let’s choose love.