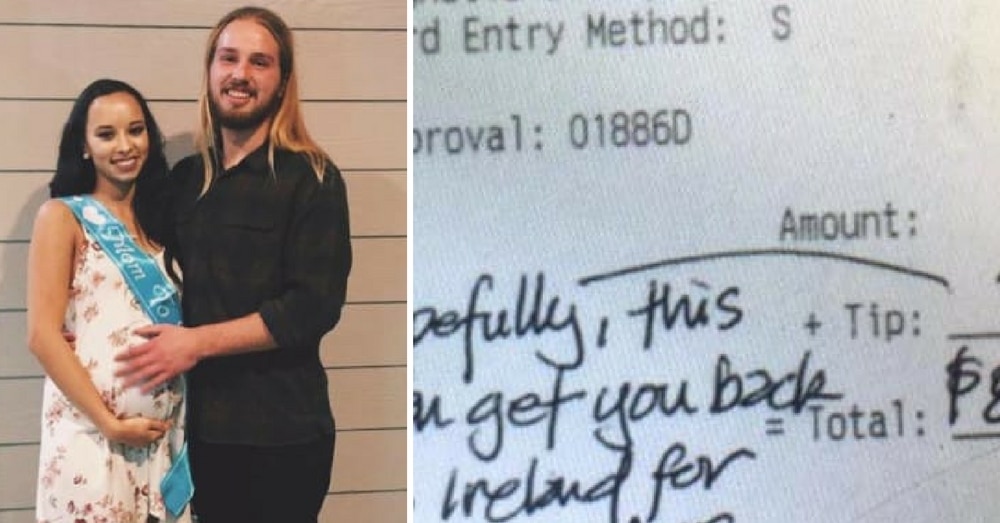 Ben and Taryn have been eagerly awaiting the arrival of their son, who is due in January. The only thing that has made them sad about his birth is that they didn’t know how they would take him to meet Ben’s family.

You see, Ben is from Ireland, but he fell in love with Taryn, who is from Texas, and has been in the States ever since.

He has been wanting to take Taryn to meet his family in Ireland, especially now that they have a little one on the way, but even though both of them are hard workers, the expensive plane tickets were difficult to swing.

Recently, Ben, who works as a waiter, was serving a friendly table and struck up a conversation with them. He told them about Taryn and her pregnancy and how he hoped to one day take her and their son to Ireland.

After the table left Ben looked at their receipt and he couldn’t believe his eyes. He couldn’t wait to get home and show Taryn.

As soon as he walked in the door he handed Taryn the receipt, and her jaw dropped to the floor.

Next to the tip line was a note:

“Hopefully, this can get you back to Ireland for the holidays.”

The couple was absolutely ecstatic. Since they can’t thank the generous stranger in person, Taryn posted a photo of the receipt to Facebook, where it has quickly gone viral.

“Thought I would share it to show everyone that’s (sic) there is not only hate out there,” she wrote. “Truly blessed.”

Now the couple is eagerly planning their trip to Ireland for after their son is born. We know Ben’s family will be thrilled to meet him!

Were you touched by what this stranger did for this couple? So share this!