She Thinks They’re Taking A Christmas Pic, But Keep Your Eye On The Girl In The Middle… 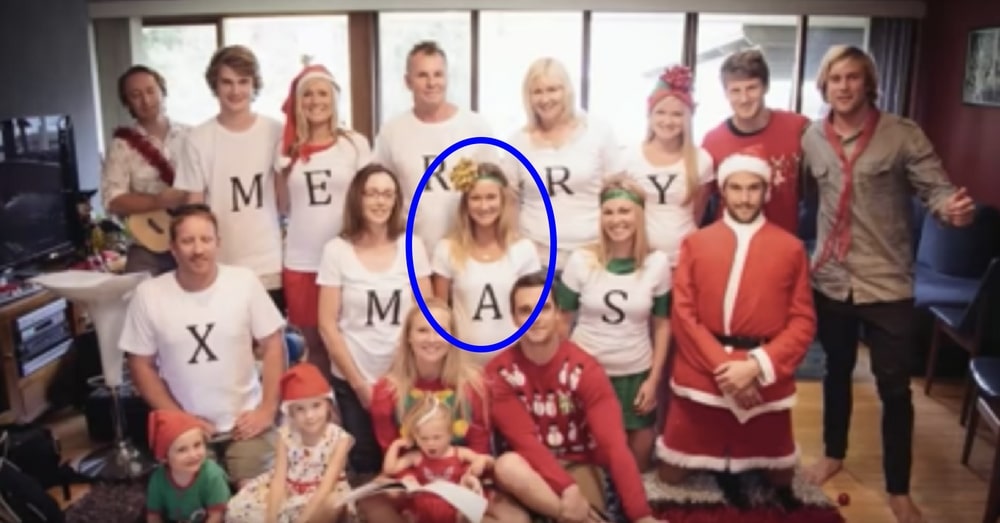 Jamie thought they were just taking a family Christmas photo. She posed with her boyfriend, Tyne, in front of the rest of the family who was wearing t-shirts that spelled out “Merry Christmas.”

Little did Jamie know that Tyne had a surprise up his sleeve. Without Jamie realizing it, a few of the family members shuffled around so they ended up spelling out a very different message: “Marry me?”

Tyne knew Jamie would want to check the photo after they took it, and he was ready – kneeling behind her with a ring when she read the message.

The sweet proposal first went viral in 2014, but what people didn’t realize at the time was the heartbreaking story behind the incredibly emotional proposal.

It turns out that, just two months earlier, Jamie and Tyne had learned that their unborn child had passed away at only 20 weeks.

Jamie had unknowingly been suffering from antiphospholipid syndrome, an autoimmune disorder that caused a blood clot in her placenta and cut off her baby’s supply of nourishment.

The heartbroken couple was leaning on each other for support, and Tyne’s proposal was a physical sign that the two of them could move forward with their lives together.

At their wedding, the couple asked their guests to donate to Pregnancy Loss Australia. They ended up raising over $5,000 for the cause that was so dear to their hearts.

After they were married Jamie got pregnant again, but she was terrified that she would lose the baby.

Thankfully she had Tyne there to support her along the way, and in September of 2015 the couple welcomed baby Lenni into the world, happy and healthy.

As painful as the loss of their first child was, Jamie said that going through that tragedy brought her and Tyne closer as a couple.

“We are stronger for that,” she said, “and I cannot wait to show Lenni how her dad proposed to me when she is older.”

Watch the sweet proposal for yourself by clicking below:

Did you love this sweet proposal as much as we did? So share this!