Teen Thinks New Bike Is Big Surprise, Then Cop Hands Him Something 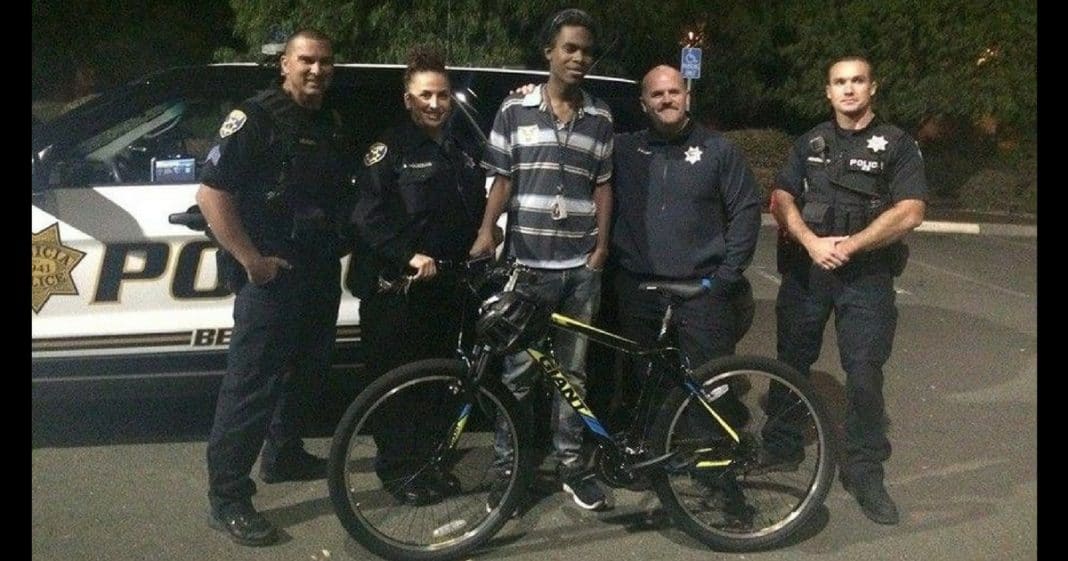 You may recall a story we published a little while back about 18-year-old Jourdan Duncan. The teen was stopped by police after he was found walking down an industrial road late one night.

After talking to Jourdan for a little while, Cpl. Kirk Keffer learned that the teen had just gotten off his job on a packaging line – where he worked from 3 p.m. to midnight – and was walking back to his parent’s house…7 miles away!

When Jourdan first started the job he had a car to get him back and forth, but it had broken down and he couldn’t afford to fix it. Not wanting to bother friends by asking them for rides, Jourdan had taken to walking to and from work, a journey which took him two hours each way.

Cpl. Keffer was so impressed with Jourdan’s work ethic and determination that he asked the Benicia Police Officers’ Association to help him get the hard-working teen a bike.

The teen was blown away by the officers’ generosity, but then they decided to do him one better.

They started a GoFundMe campaign to help Jourdan raise money to fix his car, but the campaign went far above and beyond what they ever could have imagined, raising over $42,000 in four months!

“The community just had an outpouring of love for him,” Keffer said Tuesday. “It was something the community needed, something positive at the time.”

Jourdan used the money to buy a used Volkswagen Passat for $2,900 and then put the rest of the money in savings. He has started taking classes at Solano Community College so he can pursue his dream of becoming a California Highway Patrol Officer.

“I’m just super proud of him,” Keffer said of Jourdan. “He could have went so many different ways with that money. He’s got a bright future ahead of him. I just hope that he continues down this path.”

Were you touched to see the way this community came around Jourdan? So share this!