Teen Sees Woman Steal $20 From Blind Man. What He Does Next Is Going Viral 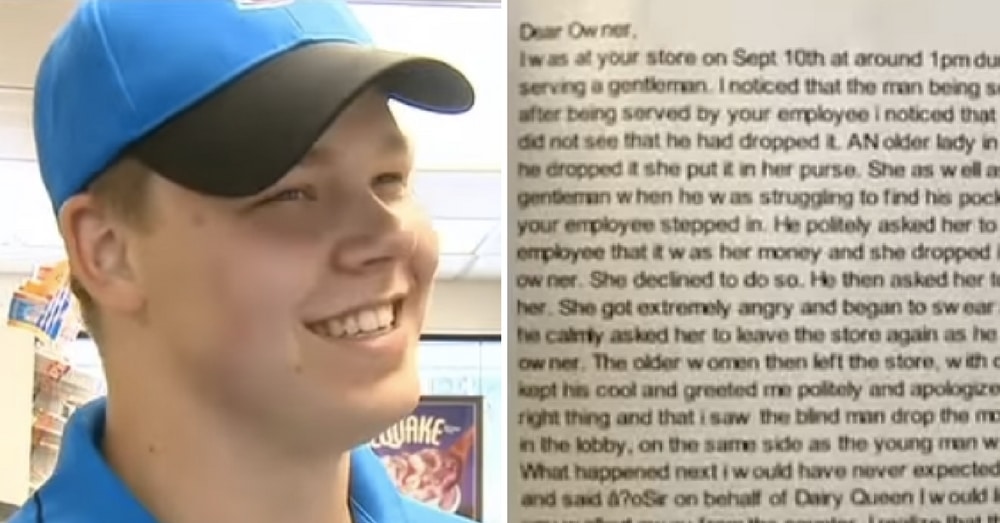 Joey Prusak didn’t do it for the praise. In fact, he didn’t think anyone would ever find out. But when his boss at Dairy Queen heard about the courageous act of kindness Joey showed one of their patrons she couldn’t help but share the story with everyone she could.

The 19-year-old, who has been a manager at the store since he was in eighth grade, was working behind the counter when a blind man walked up to order. As he went to pay he dropped a $20 bill on the floor, but didn’t notice.

When Joey saw the woman behind the man in line pick up the bill he thought she was going to return it, but he was shocked when he saw her pocket the money instead.

Joey immediately went to the woman and asked her to give the money back. When she insisted that the money was hers he told her that if she wasn’t going to return the money she would need to leave the store.

He then went over to the blind man, pulled out his wallet, and handed him a $20 bill.

“Sir, on behalf of the Dairy Queen, I would like to give you the $20 you dropped on the ground,” Joey told him.

Afterward, Joey went right back to work, never expecting to hear another thing about the incident.

However, a little while later Joey’s boss, Nancy Pettit, received a letter that had been forwarded from corporate. It turns out that another customer had witnessed Joey’s kind act and wanted to make sure he was recognized.

“It’s nice to see a young man do the right thing and get recognized for it,” Nancy said. “I just feel very blessed to have such a wonderful young man working at my shop.”

When a customer at Dairy Queen heard about what Joey had done she wanted to reward him for his kindness and “payed it forward” with $20 of her own. Others have tried to do the same, but Joey says he doesn’t want the rewards.

“I didn’t expect anything, nor did I want anything,” he said. “It wasn’t anything I wouldn’t have done on any other day. I hope everyone else would have done the same thing – which I think 99 out of 100 people would have.”

Are you proud of Joey for what he did? So share this!