Teen Notices Special Needs Student’s Shoes Don’t Fit. What He Does Next? Wow 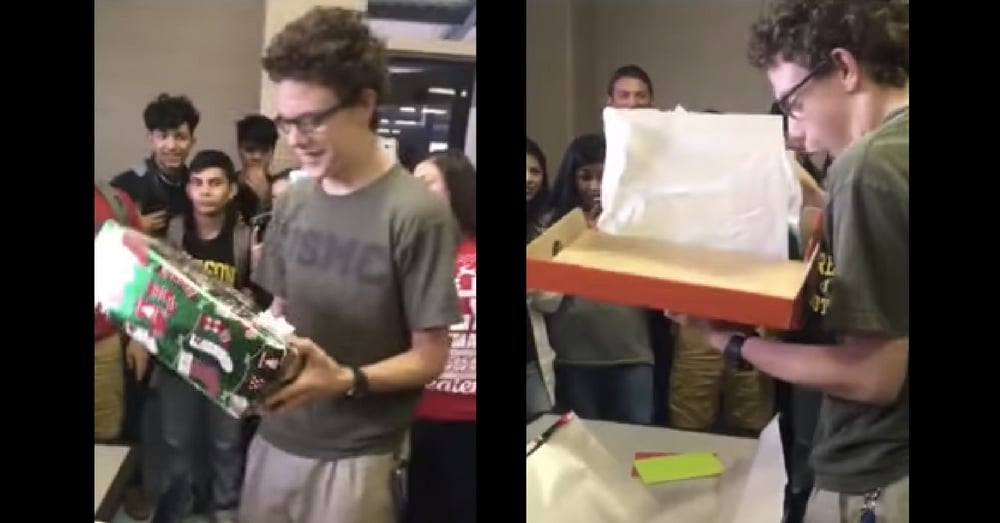 It’s stories like this that restore our faith in humanity, and that’s exactly what we need this time of year!

J.R. Gilbert is a special needs student at Somerset High School. He has hydrocephaly and ADHD, but that hasn’t stopped him from touching lots of lives and making lots of friends.

One day J.R. was talking to classmate Salvador Solis when he asked him if he knew anyone who wore a size 13 shoe.

“He was telling me that his shoes didn’t fit him and if I knew someone who wore a size 13. I didn’t,” Salvador said. “It bothered me that one of my friends didn’t have the appropriate things he needed so he could be comfortable. I wanted to do something.”

The 17-year-old junior, along with his two friends Roger Villegas and Martin Ramos, began asking other students if they would be willing to donate some money to help them buy a new pair of shoes for J.R.

Around 20 students ended up donating $180, which they were able to use to buy two new pairs of shoes.

On Friday, the last day of school before Christmas break, the students gathered together to give J.R. his presents. His reaction when he pulled back the wrapping paper said it all.

“What?! You got my favorite kind too!” J.R. exclaimed as he opened up one of the boxes.

One of the students posted a video of the sweet moment on Facebook where it has since been viewed millions of times.

J.R.’s mom, Linda Gilbert, was incredibly touched by what her son’s classmates did for him.

“It was just the sweetest thing,” she said. “This is one of those instances where he was able to see that he has a lot of friends.”

“He can’t do things other students do like play football,” she added. “So when something like this happens, it makes him feel good.”

Linda said that J.R. does own shoes in his own size, but she can’t get him to wear them because he loves wearing a pair of boots his grandfather gave him, even though they are two-and-a-half sizes too small.

“He loves to try to wear those boots because they’re from his papi,” she said. “They were a gift from his papi and they don’t necessarily fit.”

She thinks this time it might be different after seeing how excited J.R. was to get the shoes from his friends.

Since the video went viral others have decided to jump in, sending Christmas presents to the sweet teen.

As for Salvador, he said making J.R.’s Christmas wish come true was an incredible gift in itself.

“To be able to make someone’s Christmas one to remember, it’s something that’s going to stick with me for a while,” he said.

Were you touched by what these teens did for their classmate? So share this!