Stray Dog Follows Marathon Runner 77 Miles. What He Does Next Is Going Viral 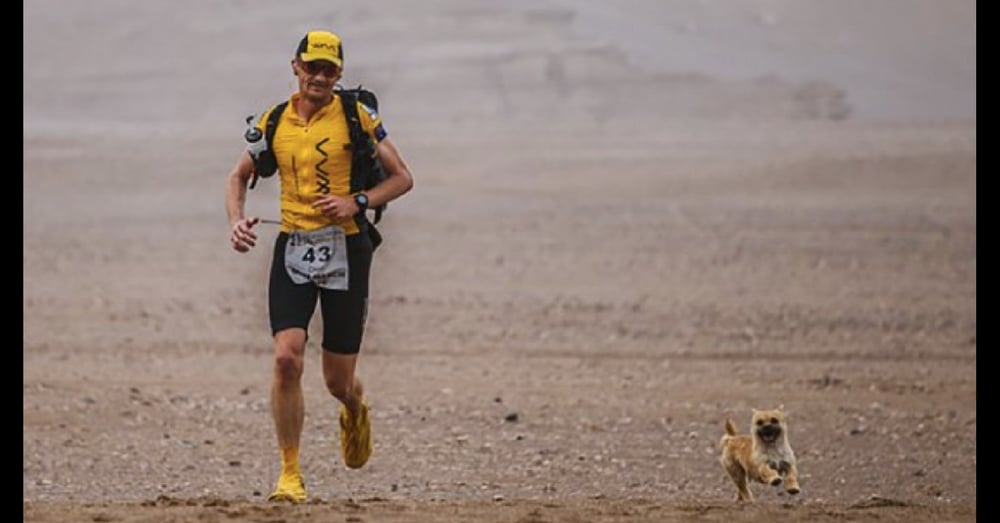 Extreme marathon runner Dion Leonard was competing in a 155-mile race through China’s Gobi desert when he realized he had a tail – literally. A stray dog had joined him on the trail and would not leave his side for the next 77 miles.

Dion shared food, water, and even his sleeping space with the little pup, and the two formed quite the bond.

“We developed an unbreakable bond,” he said. “I knew then this was no ordinary dog and experience.”

Marathon Runner Adopts Stray Dog Who Set Pace For Him In The Gobi Desert https://t.co/nmoNEL695o pic.twitter.com/KwhOShce85

Dion said that everyone – “from the competitors, volunteers, and race crew” – fell in love with the little dog, who he named Gobi. “For such a small dog, she had a massive heart,” he said.

Gobi helped make the race an extra special one for Dion, bringing him joy throughout the tough journey.

“It was an amazing experience to run into the finish line with her,” he said, adding that his wife noted it was the only time she had ever seen him smile at the end of a race.

Once the race was over, the Scottish runner knew he couldn’t leave his new friend behind. He started a fundraising campaign on Crowdfunder to “Bring Gobi Home,” and that’s when the story of this tenacious little pup went viral.

Dion needed to raise about $6,535 to cover the medical and quarantine expenses that would come along with the adoption process, and once people heard his story the money started pouring in. The campaign has already brought in more than three times the original goal, and Dion says the extra funds will be donated to help other dogs still waiting to be adopted.

Between medical clearances and government bureaucracy the adoption process can take months, so Gobi is still in China waiting to go to her forever home. The Leonards hope to have their little pup home in time for Christmas.

Were you touched by the sweet and unique bond between this runner and stray dog? So share this!