She Snaps Pic Of Waiter Hovering Over ‘Shaking’ Grandma. What Happens Next Is Going VIRAL 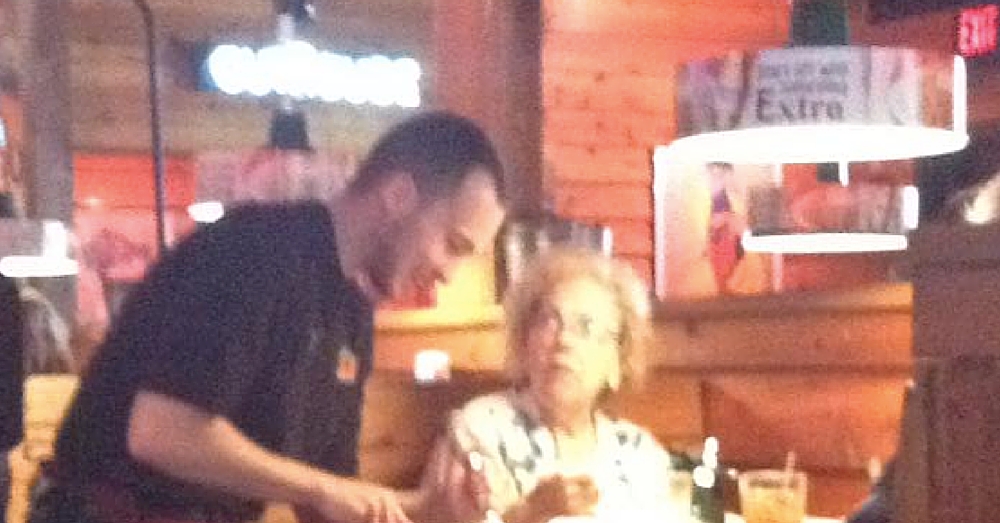 Amanda Bischoff was enjoying a Mother’s Day meal at the Texas Roadhouse in Greenwood, Indiana, when she noticed one of the servers doing something that left her stunned. She snapped a picture of the waiter and posted it to Facebook, where it has since gone viral.

What was it that captured not only Amanda’s attention, but the hearts of millions all over the world as well? The waiter was cutting up the steak of an elderly woman at a nearby table.

Amanda said the woman’s hands were shaking so badly that she had been unable to cut up her meat. Without missing a beat, the server stepped in and cut her steak for her.

“Being a server is a tough job, especially on one of the busiest holidays like Mother’s Day,” Amanda wrote. “The restaurant was packed, but this server took the time to cut this woman’s steak up for her, we heard her apologize and say she’s just gotten to[o] old. It’s nice to see kind gestures and he is doing it with a smile on his face. Great job Texas Roadhouse.”

Since the post went viral, the server in the picture has been identified as Tyler Guinther, a Marine Corps veteran. His friend, Justin Graf, said that when he saw the photo he wasn’t surprised, writing that Tyler “is a US Marine Infantryman that still lives his life everyday just the same. To him this is just another day to the rest of us it’s incredible.”

While it may have been “just another day” to Tyler, it meant the world to the woman he was helping, and he has touched millions of other lives through this one simple act. His act of kindness is a good reminder that we always have time to be kind – we just never know what kind of impact that kindness will have.

Were you touched by the kindness Tyler showed this woman? So share this!