She’s Waiting To Hear If Cancer Has Spread, But When Doctor Comes In Her Jaw Drops 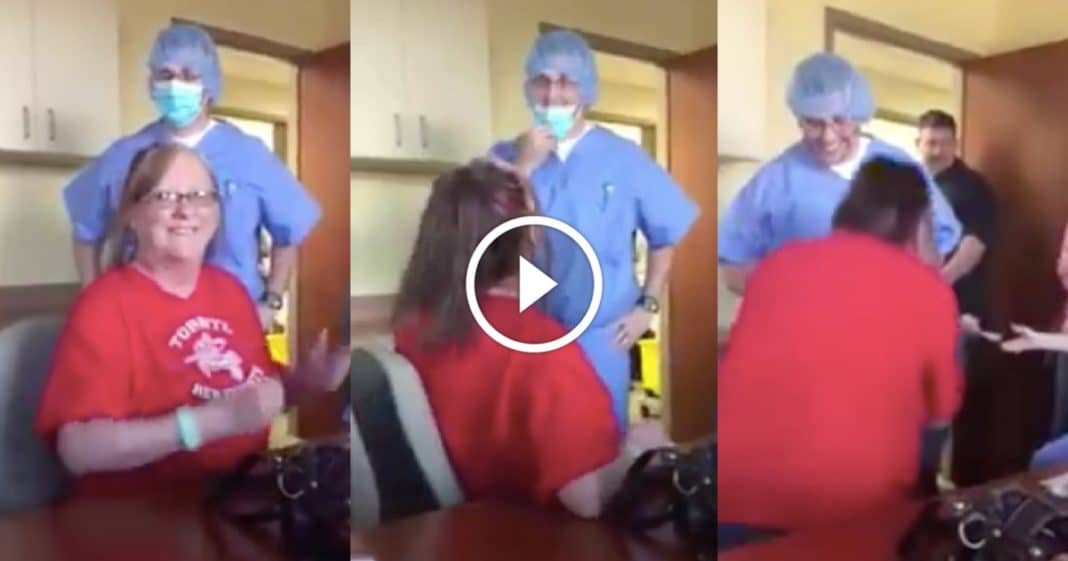 It’s a word no one ever wants to hear: cancer.

Mary Glasure’s life changed forever when doctors told her that she had contracted cancer.

Earlier this month she went to the Tony Teramana Cancer Center in Ohio to begin counseling on chemotherapy and figure out what would need to happen next in her treatment.

She brought most of her seven kids with her for support as she underwent several different body scans and prepared herself for the worst.

As she sat in the room waiting for her results, a doctor in full scrubs and a surgical mask walked in. He sternly looked at Mary and told her, “I have a lunch appointment to get to; let’s hurry up.”

Mary was surprised at his shortness.

“I was thinking: Oh my God, now what?” she recalled.

Suddenly, though, the doctor took off his mask, and Mary immediately collapsed in tears.

The stern “doctor” was actually her son, Marine Cpl. Corey Hoffmaster, who had been stationed in Yuma, Arizona, and hadn’t been able to come home for the past two years!

Once Mary overcame her initial shock she stood up to give Corey a huge hug. There wasn’t a dry eye in the room as the whole family watched the sweet reunion.

“We were all in tears; it was pretty amazing,” said Corey’s brother, Cody Glasure.

Corey said this was the longest he had been away from home since enlisting in the Marines, and as soon as he heard his mom had cancer he knew he had to figure out a way to get back.

He worked with his three brothers and three sisters to come up with a plan to surprise their mom, and it’s clear all their scheming paid off!

“I was hoping he would come home,” Mary said later. “I wanted him to be here in person.”

Corey was able to stay with his mom for 10 days, and then said a tearful goodbye to her on Monday as he headed back to Arizona.

We know the months ahead won’t be easy ones, but Mary can find strength knowing she has the full love and support of her family as she begins this battle.

Were you touched to see this sweet reunion between mother and son? So share this!