She’s Confused When Football Team Surrounds Her, Then Things Take An Unexpected Turn 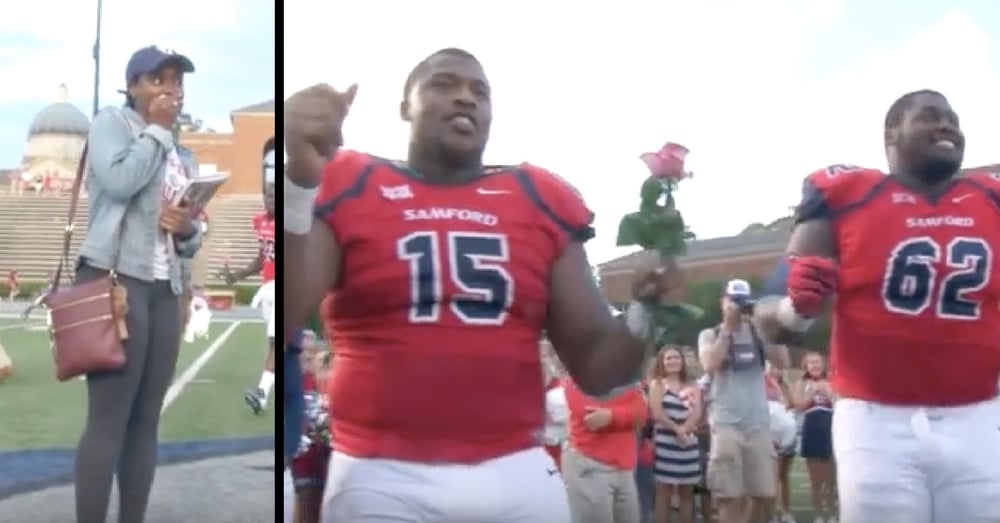 We just love good proposal stories, and when they’re captured on video it’s even better!

Hopefully when the guy is getting ready to propose, marriage is something that has at least been discussed (it’s never a good thing when the girl is caught totally off guard!), but it’s always more fun when the actual proposal is a big surprise.

Jasmine Henderson got the surprise of her life when her boyfriend, Deion Pierre, proposed to her this weekend.

Deion is a linebacker for the Samford University football team. On Saturday the team had a big win over one of their rivals, but there was about to be so much more to celebrate.

Most of the fans had already left the stadium and Jasmine was waiting on the field for Deion to come out of the locker room. Suddenly Ed Sheeran’s song “Thinking Out Loud” started playing and all of Deion’s teammates came out holding roses and surrounded Jasmine on the field.

At first she was confused, but it didn’t take her long to figure out what was going on. When Deion broke through the crowd and asked Jasmine to marry him it was an easy yes.

After the proposal someone asked Deion how he was feeling.

Watch the sweet proposal for yourself by clicking below:

Did you love this proposal as much as we did? So share this!