She Sees Strange Box By Bus Stop, Goes For Closer Look. That’s When She Hears Crying… 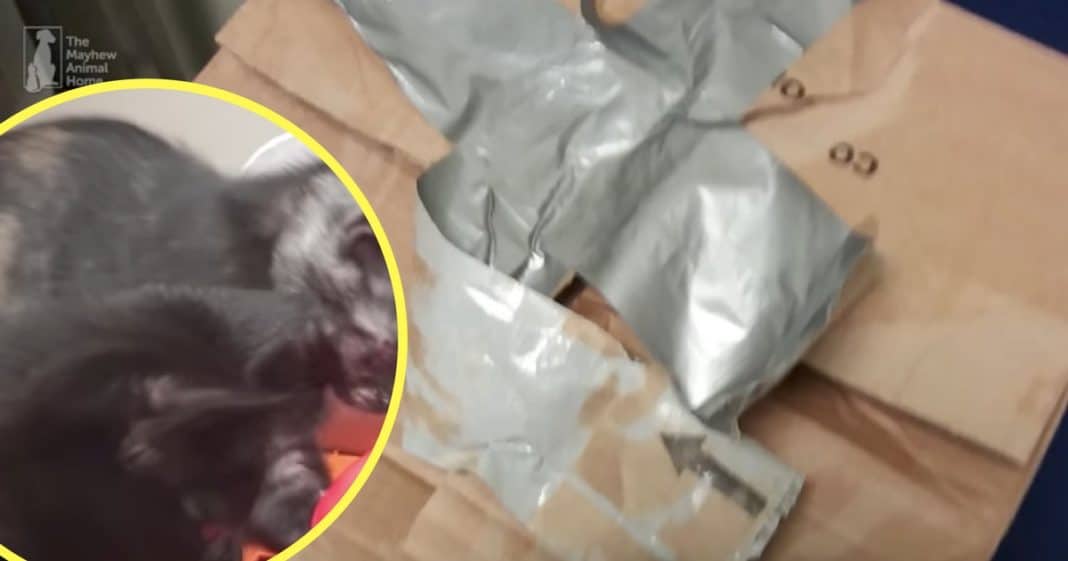 It was an unusually hot day in London – one of the hottest of the year – when a passerby noticed a cardboard box sitting next to a bus station.

She thought it was kind of odd, but didn’t think too much of it until she got closer and heard a strange noise coming from the box. It sounded like crying.

The box was sealed shut with duct tape, but she quickly ripped the tape away and opened the flaps, and what she found inside broke her heart. Three tiny, black and gray kittens stared up at her, their eyes crying out for help.

The woman rushed the kittens over to the Mayhew Animal Home in London where they immediately received treatment. Doctors watched them closely to make sure none of them were suffering from hyperthermia, but thankfully all of the kittens were okay.

“We don’t know how long they had been in the box for, but they were very hot and obviously extremely scared, so we immediately took them to our Vet Clinic to be thoroughly checked over,” said Tania Mazzoni, Mayhew’s Animal Welfare Officer.

They named the 11-week-old tortoiseshell kittens Jackie, Jenny, and James and got them ready to be adopted. The kittens were spayed and neutered and received their vaccinations.

Thankfully, they have rebounded quickly from their traumatic ordeal and are now happy and healthy. They love to romp around and play together, just like any other normal kittens.

“Jackie, Jenny and James are all doing really well and gaining confidence every day,” Mayhew’s PR and media officer said. “They are cheeky and playful and love attention.”

No one knows why these sweet kittens were left in that box that day. Perhaps the person who abandoned them thought putting them in a box near the bus station would lead to them being found quickly. Or maybe the person was just being cruel.

Thankfully, though, these kittens were found and rescued. Now they just have to get a little older and then they can move into the new, loving forever homes that are already waiting for them!

The Mayhew Animal Home has put out a plea to anyone else in the area who may be thinking of abandoning their own pets. Whatever the reason, Mayhew is there to help.

“At The Mayhew we are dedicated to helping hundreds of people in crisis situations every year,” Tania said, “we wish whoever had abandoned the poor kittens had contacted us first, so we could help. We are here to help and advise on the best course of action for the animal, no matter what the problem is.”

Were you happy to see these sweet kittens rescued and readied for their new homes? So share this!