Separated Twins Finally Move Out Of Hospital After Emotional Goodbye 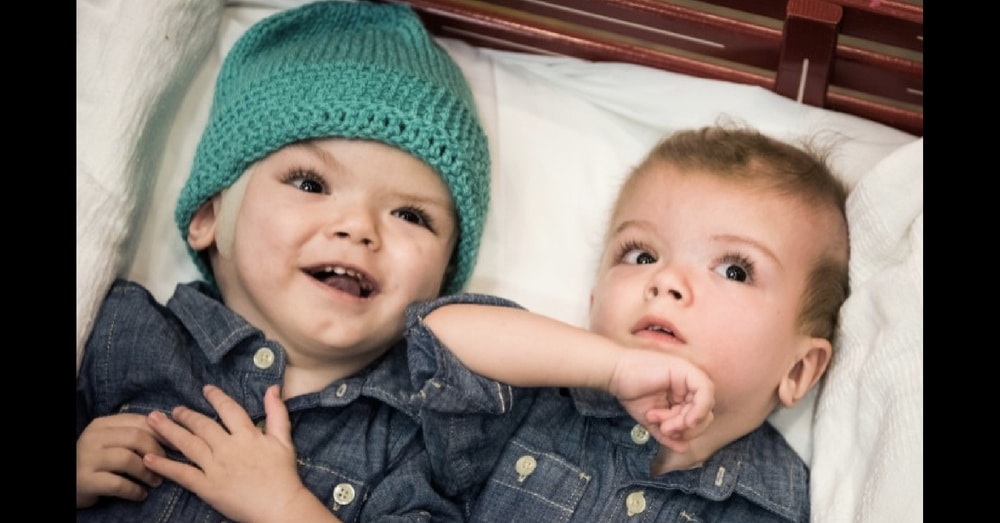 Jadon and Anias McDonald, the twins born joined at the head whose separation surgery captivated millions around the world, were gently placed in a red wagon.

They lay side by side, Anias in a blue jumpsuit and Jadon in a gray one. They wore specially fitted white helmets, but there was no evidence of the tubes, IVs or monitors that have been their lifelines since surgery.

Outside the room, more than 30 doctors, nurses and staff at the Children’s Hospital at Montefiore Medical Center lined the hallway. A red carpet was rolled out for the boys.

It was time to say goodbye.

Among those on hand Wednesday were lead neurosurgeon Dr. James Goodrich and lead plastic surgeon Dr. Oren Tepper. Both were armed with celebratory baby rattles. Others waved pom-poms and shook tambourines as the boys made their way down the hall of the 10th-floor pediatric intensive care unit (PICU).

The staff had posted a sign on the wall: “Way to go! You did it! We are so proud of you.”

Sitting at the front of the wagon was the boys’ 3-year-old brother, Aza. 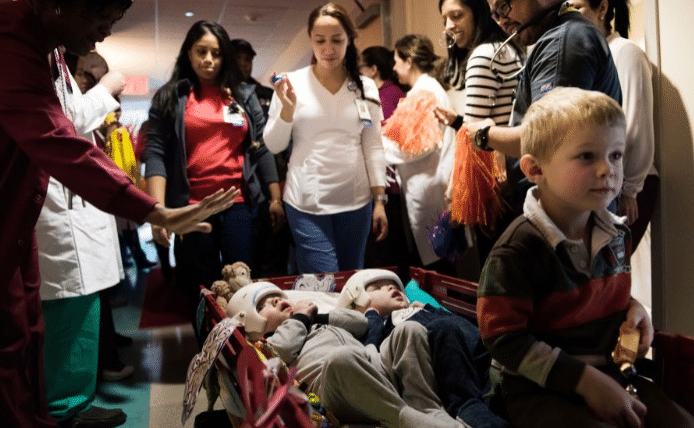 The boys’ father, Christian McDonald, pulled the wagon as their mother, Nicole, walked with them. Both parents paused to hug almost everyone.

The moment stood in stark contrast to the boys’ arrival on February 18. On that day, the twins were on a private flight to New York from Illinois. While in the air, Anias stopped breathing and turned blue. Nicole, a pediatric physical therapist, did everything she knew to try to rouse him and worried Jadon would soon be next.

“It was a 10-minute period when all of this was happening where (Anias) was in and out of consciousness,” Nicole said.

They were rushed to the emergency room immediately upon landing. It turned out Anias was suffering from a severe strain of the flu.

And now, here the family was, leaving the same hospital amid such jubilation. They were headed to Blythedale Children’s Hospital, a specialty facility in suburban New York where they will undergo months of rehabilitation, including physical, occupational and speech therapy.

“It’s the most exciting step for me, because I want to see what they can do,” Nicole told CNN Chief Medical Correspondent Dr. Sanjay Gupta moments before she left the twins’ hospital room for the last time. “We’ve all come to agreement that it’s not goodbye. It’s just a see-you-later.”

Added Christian, “I’m excited. No ifs, ands or buts about it. I’m just so glad. From this point on, we can actually be all together as a family.”

It marked two months to the day since the 27-hour surgery to separate the boys ended on October 14 — what their dad described as a moment of “hope and a chance for a normal life.” It also marked one of the fastest such recoveries on record.

Goodrich, who earlier in the day performed craniofacial reconstruction surgery on a 9-month-old boy, acknowledged that he’d miss the twins.

See the party the hospital threw for these special boys at CNN.