Rescue Rat And 13 Babies Set Up In New Home, But Watch What She Does When She Finds A ‘Better’ One 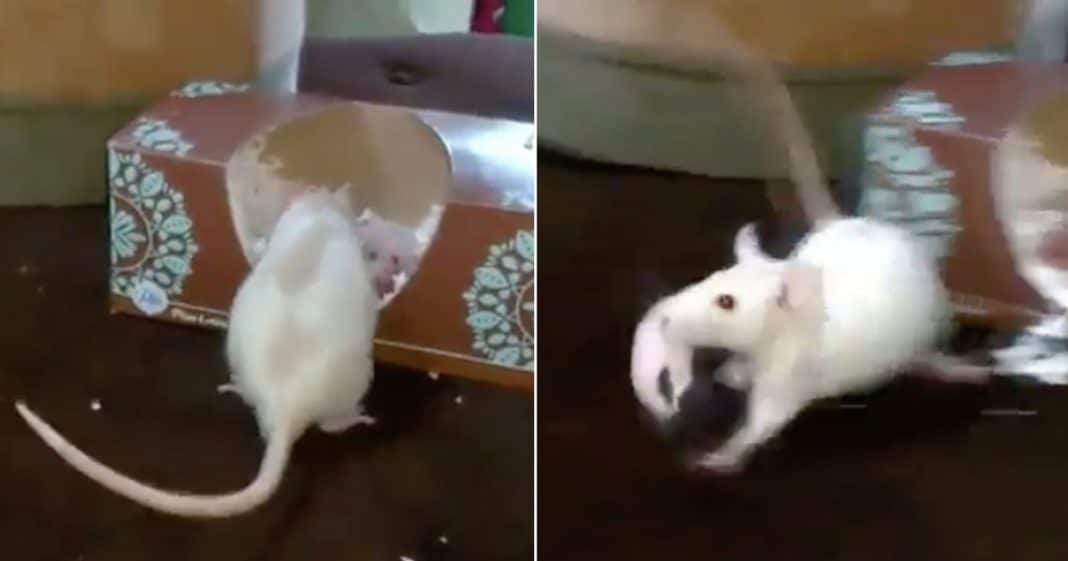 When it comes to rats, most people either love them or hate them. Some see them as yucky pests, while others know them as sweet and cuddly little friends.

Whatever your feelings about rats, though, we think you’ll find this video of a momma rat caring for her babies to be pretty adorable!

The video was posted by The Pipsqueakery, a hamster rescue and sanctuary that specializes in medically or behaviorally special needs hamsters. They also take care of rats and other small animals who need special care.

Kelpie the rat came to The Pipsqueakery as a rescue. She was only 9 or 10 weeks old at the time, but she was already very pregnant.

When she first gave birth to her 13 babies she wasn’t very good at taking care of them because she was pretty much a baby herself. Over time, though, Kelpie’s caretakers helped her learn how to be a good mom and take care of her babies.

Even though she is still very young, she is doing a much better job of caring for her family, and so far all 13 of her babies have survived.

It is good for rats to be socialized at a young age as it helps them become friendlier and more comfortable around humans and others animals. The caretakers had taken Kelpie’s whole brood out to socialize recently when they noticed her doing something a little funny and had to capture it on camera.

Even though they had made her family a nice, warm bed in a box of tissues, when Kelpie saw a nearby fuzzy cave house she decided she liked it better and needed to move her family in.

It was quite the ambitious move taking all 13 of her babies over, but the determined momma patiently went back for each and every one of the babies and got them comfortable in their new home.

Eventually, Kelpie’s family had to go back to their own cage, but every time they are brought out for socializing or when their cage is being cleaned, Kelpie takes them right back to her favorite fuzzy cave.

She even makes sure the house is extra warm and cozy by stuffing small pieces of felt and other material around her babies while they sleep:

Say what you will about rats, but it’s clear from these videos that Kelpie is one loving and very capable mother. We wish her and her babies all the best!

Did you find these videos of Kelpie and her babies as adorable as we did? So share this!