He Rejects Military Wife’s Late Check, Then Sends Her Letter That Leaves Her In Tears 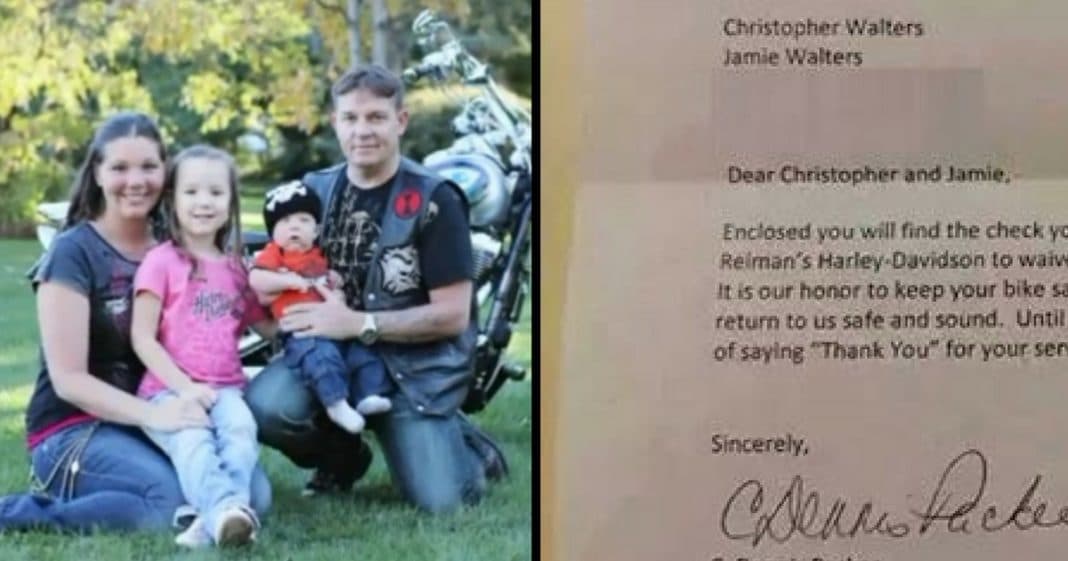 While the men and women of our military who are deployed overseas definitely don’t have it easy, we often forget the struggle and sacrifice that the families they leave behind must face.

Losing your spouse for months – even years – at a time and suddenly having to become a single parent and take care of everything at home is no small task. It can be easy for things to sometimes fall through the cracks.

That was the situation Jamie Walters found herself in. Her husband, Christopher, was deployed overseas and had left his motorcycle in a rented space at Reiman’s Harley-Davidson in Illinois.

While he was gone Jamie was supposed to keep up with payments, but she fell behind. Feeling embarrassed, Jamie sent the check for the payment along with an apology note explaining her situation.

The response she got left her stunned.

When Dennis Packee, the owner of the Harley Davidson dealership, saw the letter, he refused to take her money.

“You send that money back to her!” he told his employee.

Along with the check he sent a note that left Jamie in tears:

Enclosed you will find the check you mailed to us regarding the account of Christopher. It is the policy of Reiman’s Harley-Davidson to waive storage fees for our active duty service members who are deployed. It is our honor to keep your bike safe and secure while you provide us with our freedoms. We hope you return to us safe and sound. Until that time, we will store your bike at no charge to you. This is our way of saying “Thank You” for your service to our country. 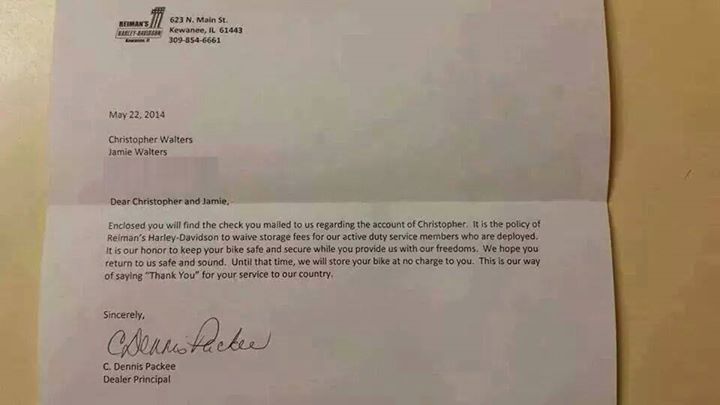 It turns out that during the Vietnam War Dennis was nearly drafted but was discharged due to a medical problem. He said that experience made him extra aware of and extra grateful for the sacrifices our armed forces make, and he is always looking for ways to give back.

To him, storing Christopher’s bike for free was no big deal – it was just the policy he had stuck to for the 18 years he had owned the dealership. He never expected anyone else to hear about it or to receive any recognition.

However, Jamie was so overcome by the kindness Dennis showed her and her family that she shared a photo of the letter he had sent on social media. In no time at all, that photo went viral.

Suddenly Dennis got flooded with calls from people all over the country who wanted to thank him for his kind and humble actions.

While he was shocked by all of the attention he received, he said it has moved him and helped restore his faith in America.

“I got to thinking, this is America and people DO care. They care about their soldiers and they’re expressing that,” he said.

“America is still America. I was a little worried about how our country was going, and to see people step forward in this way, it’s just enlightened me,” he continued. “A small effort like this, and look where it’s gone. Maybe more will do the same thing.”

In addition to the recognition Dennis has received on social media, Representative Cheri Bustos, along with the Walters, visited his store to present them with a Congressional Record Statement to “commend them for their service to our nation’s men and women in uniform.”

Were you touched by what Dennis did for Jamie and Christopher? So share this!