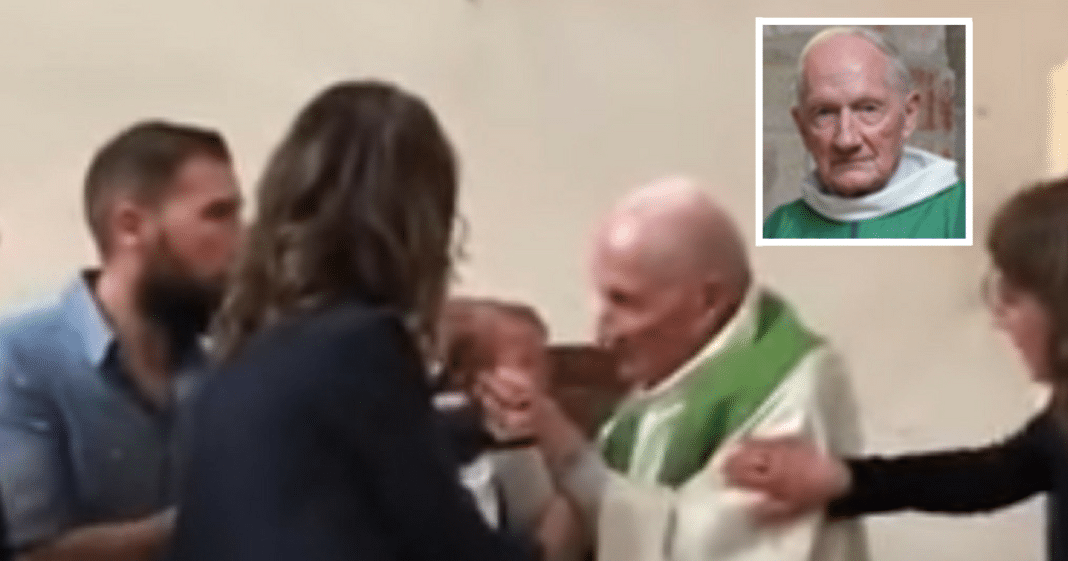 UPDATE: The French priest who was caught on video slapping a visibly frightened child during its baptism has been identified and suspended from all baptisms and marriage celebrations.

Father Jacques Lacroix, 89, said ‘I am finishing my ministry now’ and that ‘there is an end to everything’.

He carried out the bizarre assault during a ceremony at the Collegiate Church in Champeaux, near Melun, in the south-eastern suburbs of Paris, last Sunday.

In a statement released Friday by Meaux Dioceses in France says Father Jacques Lacroix has been removed from all activities surrounding the church after the video went viral, causing rage and indignation by millions of people who viewed it.

“Since June 21, a video circulates in the press and social networks on which we can see a priest (89 years), celebrate the baptism of a child in Seine-et-Marne,” the statement read. “This short video is an excerpt from the celebration which the baby cries a lot. The elderly priest loses his temper and slaps the child. Aware of this inappropriate gesture, the priest apologized to the family at the end of the baptism.”

The diocese wrote Lacroix was likely tired when the little boy began to cry although they added that the elder’s behavior “does not excuse him.”

“On Friday, June 22, Bishop Nahmias, Bishop of Meaux, took provisional measures to ensure that the priest was suspended from all baptism and marriage celebrations,” the statement continued. “These measures also require him not to intervene on the Collegiate Church of Champeaux now and to celebrate masses only at the express request of the parish priest.”

“Let us confide to the Lord the family of the baptized and our brother Jacques Lacroix,” it concluded. 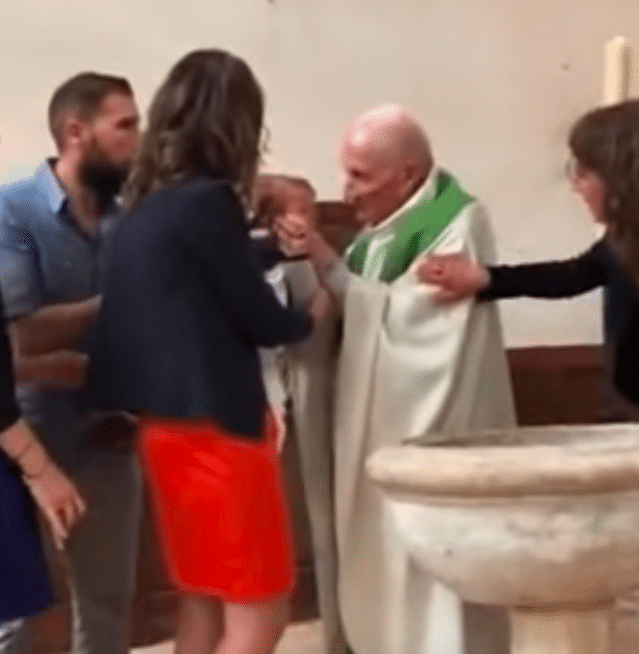 ‘Calm down, calm down, you must calm down,’ Father Jacques can be heard saying in the video, adding ‘be quiet’ before squeezing the boy’s face in his hands.

The priest then stares at the boy in the eyes and slaps him hard on the cheek with his left hand.

The aggression prompted an immediate reaction from the boy’s parents and other family members, who pull him away.

Denying that the assault was too severe, Father Jacques told France Info radio on Friday: ‘It was somewhere between a caress and a slap, I hoped to calm him down, I didn’t know what to do.

‘The child was screaming a lot and I had to turn his head to pour water over it.

‘I told him to “calm down, calm down” but he was not calming down. I tried to hold him close. I just wanted him to calm down.

‘I apologised for my clumsiness to the family. I am finishing my ministry now, it was my last baptism, there is an end to everything.’