Pregnant Mom Takes Selfie With Tiger, But Watch What Happens When She Notices Her ‘Bump’ 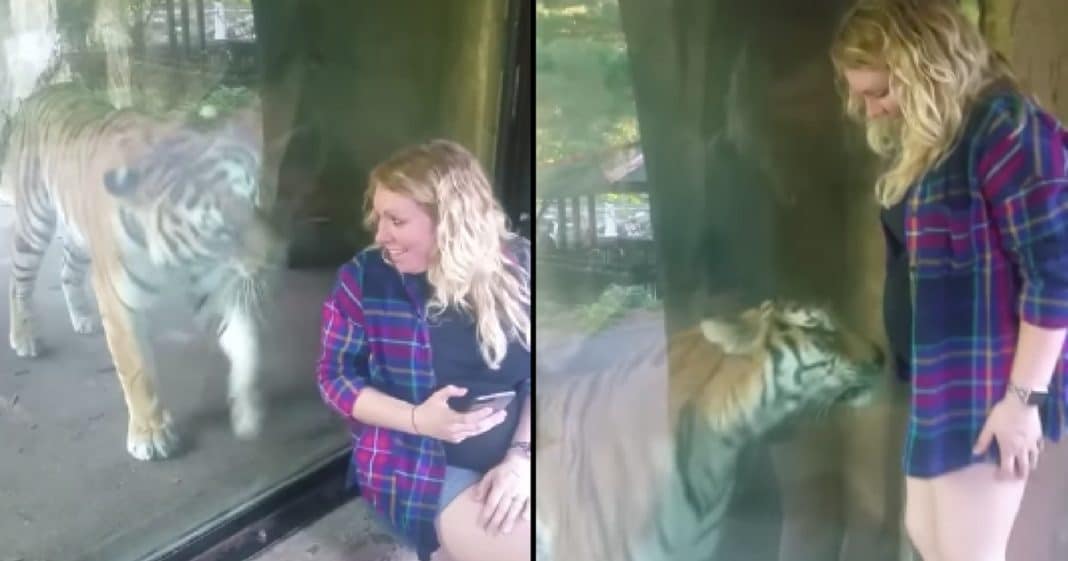 For the most part, the line between wild and tame doesn’t get crossed. And that’s a good thing – if lions and tigers were freely roaming through our streets all the time the results probably wouldn’t be good!

But every so often the “wild” and the “tame” meet in the middle, and the results can be quite magical.

That’s exactly what happened when Natasha Handshoe visited Indiana’s Potawatomi Zoo with some of her friends recently.

As they got to the tiger enclosure, Natasha, who is 27 weeks pregnant, was excited to see that one of the female tigers had come close to the glass. She went over and sat down right next to her and tried to take a selfie.

As she did so, the tiger started pawing at the glass and Natasha joked that she didn’t know whether she should be excited or scared.

But then one of her friends suggested that maybe the tiger knew she was pregnant and that’s why she was trying to get close to her.

Natasha stood up on the ledge and pressed her round belly against the glass, and what the tiger did next left her – and everyone watching – absolutely stunned…

As Natasha put her belly up to the glass, the tiger began to nuzzle her face up against it.

Natasha’s friend, Brittany Smith-Osborne, captured the incredible moment on her phone and the video has since gone viral.

“We all realized that the tiger was very interested in her baby bump,” Brittany said. “I am so excited that I was able to capture that sweet moment!”

While we have mixed feelings about zoos – we love that people are able to see and learn about animals they may never interact with otherwise but hate that the animals are taken from their natural homes and forced to live in small enclosures – we think this interaction was a pretty special one, and one Natasha and her friends are sure not to soon forget.

Somehow that tiger was able to sense that Natasha was carrying a baby and, despite the difference in species, her mother’s love came through clearly.

What a special moment that Natasha will be able to share with her own little one when he or she finally arrives!

Were you amazed to see this tiger’s reaction to Natasha’s baby bump? So share this!