Photo Of Teen Giving Homeless Man Shoes Goes Viral, But Story Behind It Is Even More Inspiring 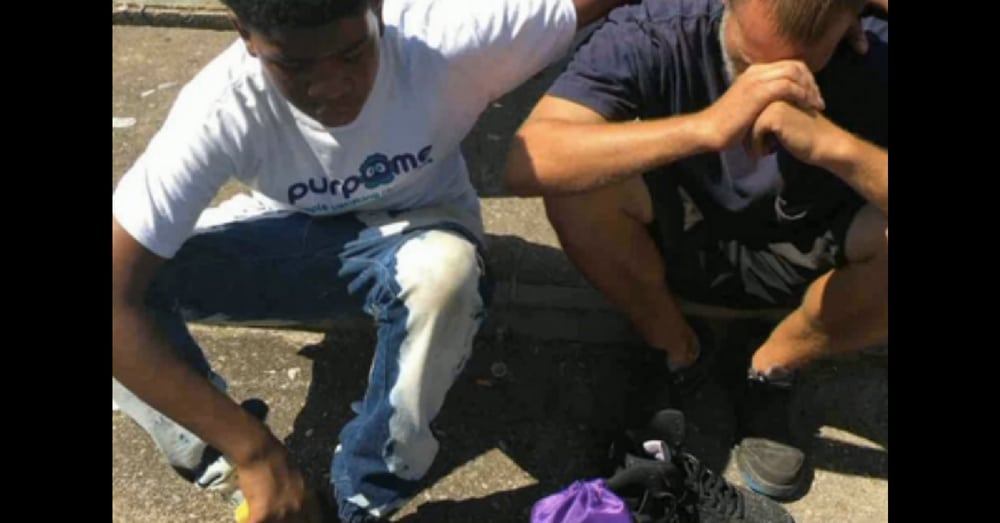 A 14-year-old from Louisville, Kentucky, has been moving thousands of people on social media after a photograph of him giving away his shoes to a homeless man has gone viral.

The act of kindness took place this Labor Day when the teen, Laron Tunstill Jr. (a.k.a. Ron Ron), went out to do homeless outreach with fellow members of PurpMe, a local nonprofit group focused on “teaching our community how to uplift one another,” according to its website.

“Ron Ron and I went out with bean soup and corn bread and just went out to spread love in our neighborhood” said PurpMe founder Jason Reynolds.

“We saw a homeless man who had holes in his shoes, and, without hesitation, Ron Ron took the shoes off his feet and gave it away,” Reynolds, 30, told ABC News today. “They sat and talked to each other. The homeless man explained that he had gone through a lot of loss and hurt in his life, and Ron Ron was very moved by his story.”

Like the homeless man, the 14-year-old was no stranger to struggle, Reynolds said.

“Lord, help us all,” Reynolds said with a laugh. “Ron Ron was a wild kid. He grew up in a rough area where people get shot all the time. The streets affected him a little, and at one point, he was fighting more, being disrespectful.”

During Ron Ron’s “bad phase” three years ago, Reynolds said he reached out to him and served as his mentor. Reynolds said that with that mentorship, and what he believes is “God’s grace,” Ron Ron underwent “a change of heart.”

“Now, he’s the one mentoring other kids,” Reynolds said. “It’s amazing. He’s just so passionate to make a change in the world and inspire other people.”

Read more about this inspiring young man at ABC News.