Fast Food Employee Slips Customer Piece Of Paper. What He Does Next Leaves Her Speechless 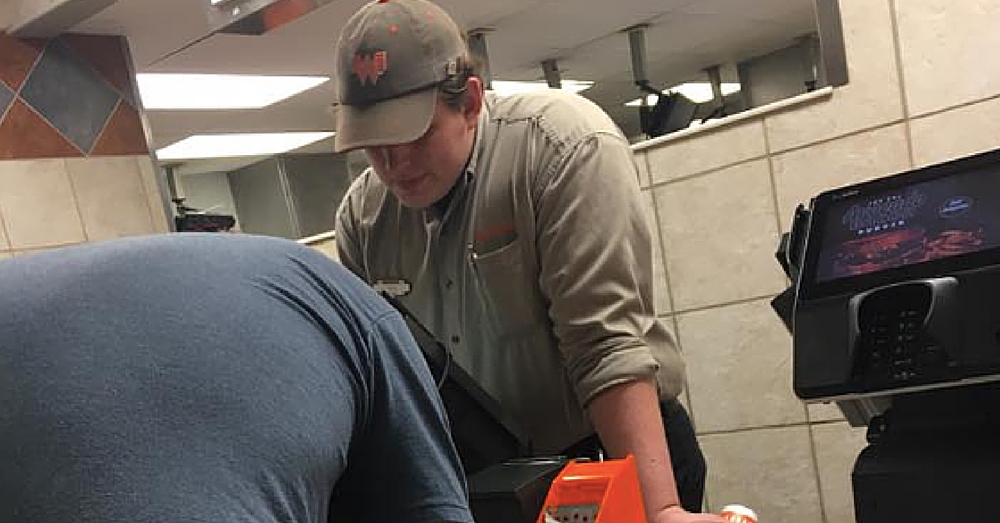 Kolbie Sanders had been working her job as a bartender and stopped by the Whataburger in Denton, Texas, to grab something to eat. Surprisingly, even though it was almost 1:00 am, there was a long line inside.

The line wasn’t really moving, so Kolbie tried to see what was going on ahead of her that was taking so long. That’s when she noticed 20-year-old cashier Taylor Pope waiting on some customers.

“The girl ordered her food and the cashier just looked at her, smiled, and very faintly said ‘I am deaf, can you please talk slower,'” Kolbie wrote.

Taylor is deaf with cochlear implants and he can read lips, but sometimes that can be difficult if someone is talking too fast.

Kolbie expected the young girl to be annoyed, but was pleasantly surprised by her response. “The girl lit up and said ‘oh, of course!’ and I heard her slow down her order for him. He still wasn’t able to catch on so he smiled again, and got a piece of paper and a pen for them to write down their order. They did so without hesitation. Without a sign of impatience, just pure joy and genuine kindness to be helping that young working man do his job.”

As each person made their way through the line, Kolbie waited for someone to get impatient or angry, but no one ever did. “Every customer complied with him and wrote down their orders without any complaints, just smiling back at him,” she said.

The encounter impacted Kolbie so greatly that she took a picture of Taylor and posted it on Facebook with a description of what had happened. The post immediately went viral, garnering almost 50,000 likes and over 21,000 shares as of this writing.

Taylor is happy with all of the attention this post has received. He is a manager in training at Whataburger and is working his way up the ladder, but admitted it was hard to get a job when prospective employers found out he was deaf. He said he hopes this will “show all the people with disabilities to not be afraid about who they are.”

As for Kolbie, this encounter has really changed her perspective on the world. “At the end of the day,” she said, “it’s about others, not ourselves. This was eye-opening for me and I will never forget that moment.”

Were you inspired by the way these customers treated Taylor? So share this!