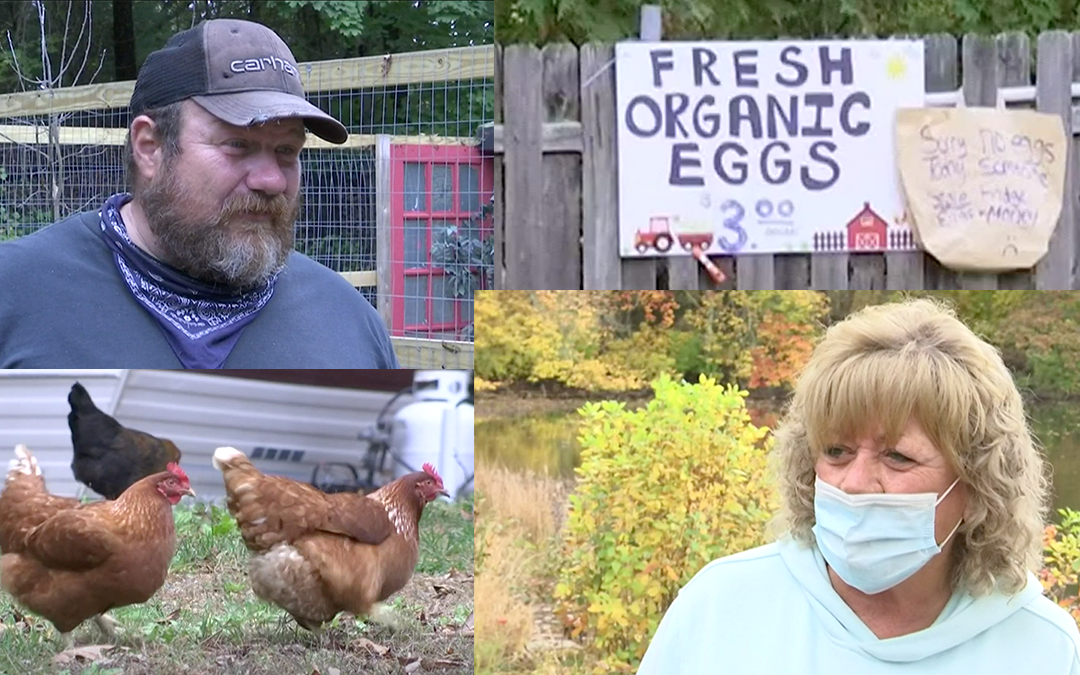 Guy Daniels from North Kingstown, Rhode Island, added 21 new all-female feathered family members in April. He and his wife decided to try his luck at raising chickens in his back yard, and it was going great after building a large chicken coop.

“We used to have some years ago and decided to do it again,” he said.

After many months, the chickens were finally old enough to start laying. That’s when Daniels decided to set up a roadside stand to sell the eggs.

Along the road by a fence, he set up a table and refrigerator with a sign that read, “Fresh Organic Eggs.” Using the honor system, he allowed the community to pick up the eggs and leave just $3 for a dozen.

Almost two weeks later, Daniels discovered that someone had stolen the refrigerator, the eggs, and the money. A new sign was added to the fence that read, “Sorry, no eggs today. Someone stole fridge, eggs, & money” with a frowny face. ?

A frustrated Daniels took to social media, reporting what happened to the page for the town. After describing what the thief took, he wrote, “Really? Did you need it so bad, you had to steal from us? I can’t afford to buy another fridge so I’ll try using a cooler. What a discouraging way to start the day.”

That’s when the community came to the rescue within minutes!

“It was the dark-heartedness that really bummed us out, but the response we got just blew us out of the water,” Daniels said.

Hundreds of people started posting messages of support. Then, a woman named Deb Lynn decided to offer Daniels a mini-fridge to replace the one stolen.

I thought, that’s terrible, in these trying times somebody is trying to sell eggs to make a little bit of money,” said Lynn. “I had an extra mini-fridge, so I posted on there I have an extra one I had one I can drop it off at your house after work.”

Later, the kindhearted woman from nearby Exeter stopped by and delivered the fridge in person. She had never met Daniels before but wanted to help.

“When this guy needs the fridge. I’m like good karma, what goes around comes around,” she said. “I don’t need money that bad I give things away all the time; I’m a giver,” she told NBC.

“That was really wonderful and generous of her. We appreciate her,” said a thankful Daniels.

Soon, another person came by to donate a second refrigerator. Even better, dozens stopped by to express interest in buying eggs.

“Make you want to give, makes you want to pass it on or pay it forward,” said Daniels. “It’s wonderful to know that the town supported us that fast and that generous,” he said.

On social media, people commented on how touched they were to see their community rallying together.

“As disheartening as this was…it is uplifting to see the outpouring of support for you as well as the offers to replace your fridge. So sorry this happened to you.”

“I can’t cover everyone, but thanks for all the kind words, The two replacement fridges, the offering to chip in to buy one, It is very encouraging. My day was turned around by you wonderful people. I love NK. And thank you all!!!”

Daniels said he planned to put up his egg stand again on Saturday.

North Kingstown sounds like a great community! Plus, they also know how to enjoy themselves, judging by the Halloween festivities at nearby Wickford Village. Witches and Warlocks took to the harbor on paddleboards!

See the video from St. Louis’ 5 On Your Side, an NBC affiliate, below: