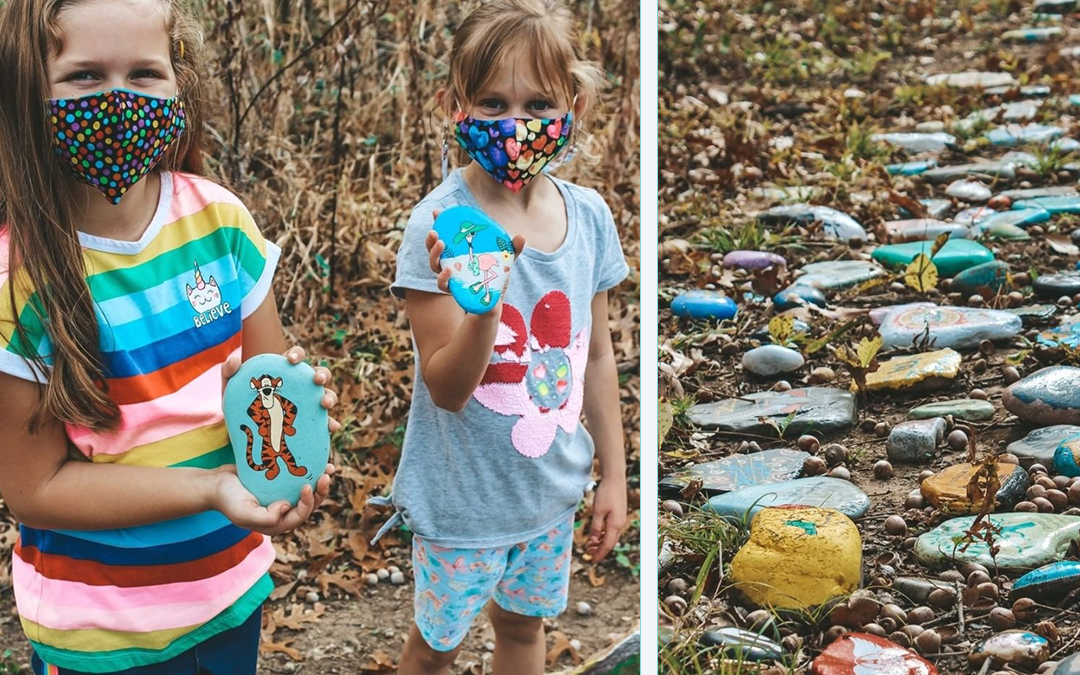 Rock art by creative people worldwide has emerged as an important way to share support in 2020. In this case, we’re talking about colorful painted stones, though music is also more essential than ever.

The small, colorful works of art are showing up all over the place. When found at a mailbox or in an unexpected public setting, the stones can be a bright spot to lift the gloom. Local rock art groups are forming in communities all over the United States and can be found on local websites and forums.

This year, people have found many creative and surprising ways to show solidarity and support. For example, one man from Massachusetts shares messages on a giant Bigfoot statue in his yard. At Halloween, many people found creative ways to offer treats safely. Now, people are getting creative to stay safe for the holidays.

Indeed, art, media, creativity, and music are essential for lifting spirits as people spend more time in isolation. The great thing about rock art is they stay in place and can be viewed safely outdoors. Thus, they can send a message of goodwill to anybody who passes by.

Rock Art Sent Through the Grapevine

In Grapevine, Texas, rock art has transformed the  Parr Park Rock Art Trail. Rock artists from all over the states and Canada have been sending colorfully painted stone to the park. Over the weekend, some of the artists took part in a “Meet the Rock Stars” event. At outdoor tents, the artist celebrated their rock art with the town.

Just about anything you can imagine can be a subject for the artwork, from cartoon characters to Mr. Rogers to patriotic red, white, and blue displays like the ones below.

Since March 28th, 2020, Parr Park has become transformed with more and more rock art. The idea was born from the idea of helping families deal with Coronavirus quarantine’s challenges. Organizer Chris Penny, 44, and his two young daughters have been placing many boxes of rocks at the trail 20 miles from Dallas. The stones now come from all over the world.

The Trail of Happiness

Before long, two Texas families saw an incredible response to their ideas for the trail.

“These aren’t just any rocks — they’re works of art,” Penny told the Washington Post. “The other day, I had 11 big boxes to unpack in my living room. It’s incredible to see that people from all over are now painting rocks to turn my community into a trail of happiness.”

Penny was inspired by stones left in the park by Ron Olsen, 62, in March. The Olsen family wanted to do something to help lift spirits after seeing Grapevine become a ghost town. Then, Olsen and Penny teamed up, hoping to transform the trail into a local attraction.

“We wanted to make it a getaway for people and give parents something safe to do outdoors with their children,” Olsen said.

“Anyone can paint a rock,” he said. “And if you put hundreds and hundreds of them together, it really adds up to something amazing.”

At first, Penny and his daughters painted rocks themselves and purchased them on eBay. He then posted on Facebook, offering to pay for shipping if rock artists would send him their work. Suddenly, he was receiving “tons of rocks” on his front porch. Due to their heaviness, they became the “talk of the post office,” and he ended up paying $10,00 in shipping!

Fortunately, people are now paying to ship the rocks themselves, and they keep showing up. Now, it has become a game for families in the town to go to the park and identify all the new rock art.

So many stones arrived that there are sections in the park devoted to all kinds of different subjects:

There’s even a section devoted to little yellow Minions characters. However, many of the stones share poignant personal stories, memories, and tributes to family and heroes.

Where Anybody Can Be a Rock Artist

Artists of all backgrounds and skill levels can participate. Thus, some stones look like stunning works of art, while others are much simpler but just as inspiring.

Today, the park is seeing hundreds of visitors each week, and the Olsen and Penny families are busy taking photos and arranging the stones. At first, people were stealing the stones, but now, they have caught on that the trail is to be respected as a sort of outdoor museum.

Also, the local Parks and Recreation Department is in on the project and has enjoyed watching the transformation.

“The fact that so many are using the trail to stay encouraged during these times is uplifting in itself,” said Grapevine Parks and Rec. director Kevin Mitchell.

“This is truly a great way for kids to connect with nature and art at the same time. My family and I have spent hours on the trail, exploring all of the rocks.”