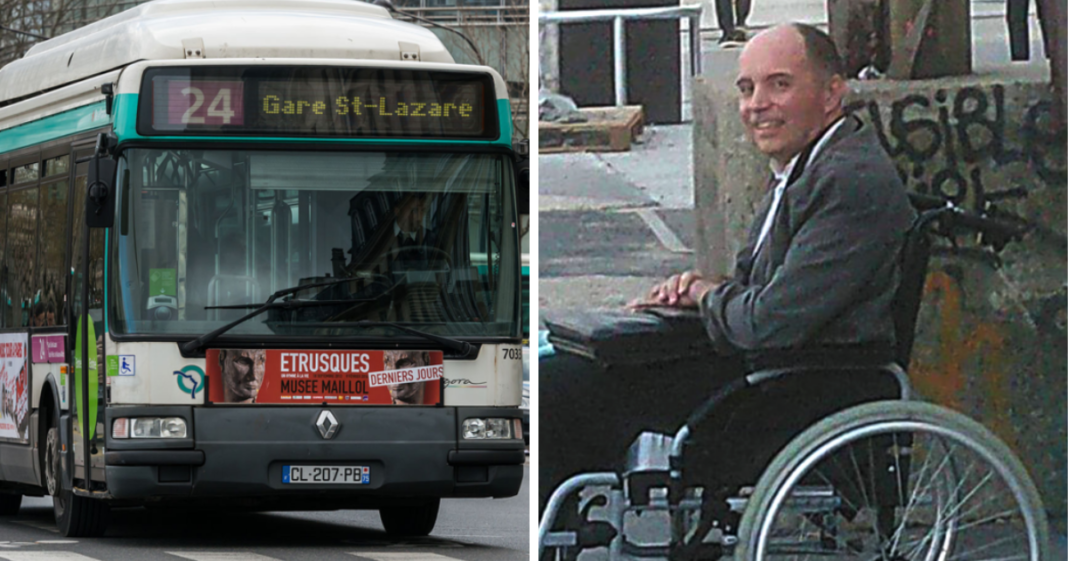 We’ve shared many stories about heroic bus drivers, such as the many drivers who have saved childrens’ lives on the school bus. This story is about a brave bus driver from Paris, who risked his job to stand up for a passenger who happened to be in a wheelchair. His example reminds us that if everyone stood up for people who are disabled, the world would be a much better place. After all, it can happen to any of us at any time.

François Le Berre was waiting to board the bus in a Paris suburb. He has multiple sclerosis, a condition that affects more than 2.3 million people worldwide. Anyone can develop the disease, thought to be caused when the immune system attacks healthy tissue in the central nervous system.

When the bus arrived, Le Berre may have expected to have some difficulty. However, he couldn’t have imagined that the passengers on the bus would all be rude and apathetic to his circumstance. The driver lowered the ramp for him, but not one passenger would make room for him. Without any space, he would have to either wait for the next bus or give up on his plans altogether. Even so, he reacted with good humor, laughing at the situation.

The buses in France’s capital city have one or two spots reserved for people with disabilities, but even the passengers occupying those spots refused to budge.

Seeing how rude and inconsiderate all of the passengers on the bus were, the bus driver took matters into his own hands. Risking his job, he ordered all of them to get off his bus in no uncertain terms.

According to the French news site, The Connexion, Mr. Berre said the driver told his passengers:

“…and made all the passengers descend. He then came to him and said:”

“You can get on first, and the others can wait for the next one.”

Mr. Berre said: “No-one wanted to move despite the access ramp. When he saw that, the RATP driver quickly intervened. He got up and said, ‘everyone off’. Everyone did it, but some people did grumble a bit.”

As the passengers grumbled, the unnamed driver explained:

Le Berre told the French edition of the Huffington Post that he didn’t know who the bus driver was.

“I do not know his identity, yet he told us that he had no disabled family members, but that he just needed to be a little civil.”

Mr. Berre was able to board the bus, only this time he had plenty of room. The passengers may have learned a lesson, to be considerate to those with disabilities.

Afterward, a French support network for the disabled, Accessible POUR TOUS, shared the story in a viral Tweet that reached many thousands of people. Most comments expressed approval for the driver’s heroic actions.

When the story went viral, the driver could have faced trouble with the agency that handles public transportation in Paris. However, Regie Autonome des Transports Parisiens (RATP) reached out to the group that posted the Tweet and said that rather than punish the driver, they wanted to recognize them for helping Mr. Berre.

The story taught people all over France and the world about helping people who face disabilities. We think that bus driver needs a medal for what he did that day!

See more from Facts Verse below:

Featured image: Screenshot via YouTube with bus via Wikimedia Commons