He Was Paralyzed 7 Yrs Ago, But Watch What Happens When Fiancée Helps Him Stand… 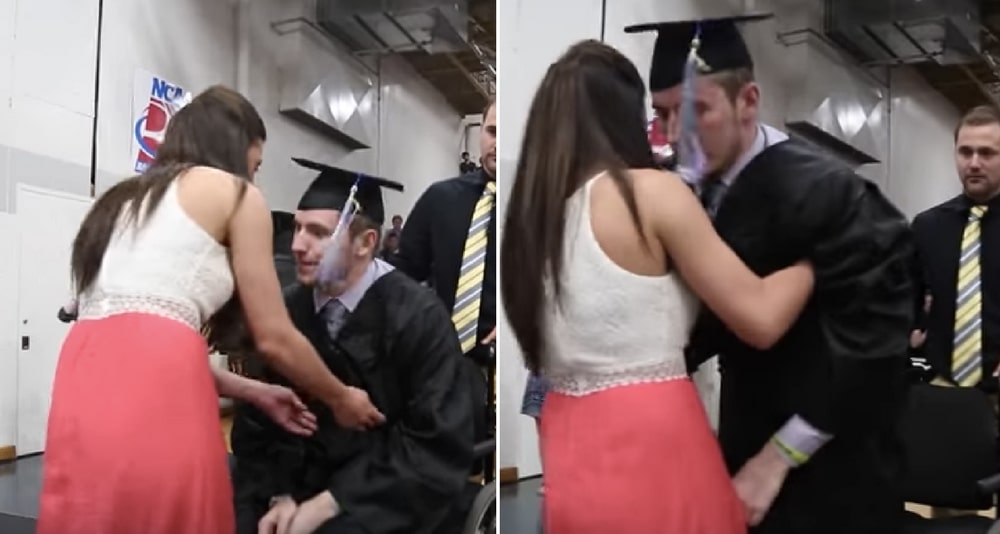 A video of a young woman helping her fiancé out of his wheelchair and across the graduation stage has been going viral lately, and it’s not hard to see why. But as inspiring as that video is, the story behind it is even more so.

Chris Norton was a freshman at Luther College in Iowa when he fractured his spine during a football game in 2010. The fracture left him paralyzed from the neck down.

Doctors told Chris that he only had a 3 percent chance of regaining any movement below his neck, but the young athlete was determined to prove the doctors wrong. He set a seemingly impossible goal for himself – to walk across the stage at his graduation.

With great determination, Chris set out to accomplish his goal. Though his progress was slow and often frustrating, he refused to give up. Gradually, some movement started to return.

Chris decided to finish school a semester early so he could dedicate more time toward his goal. He would work out up to six hours every day in preparation.

On the day before his graduation Chris proposed to his girlfriend, Emily Summers, and the next day she was on hand to help him accomplish his goal.

As the entire audience watched in breathless anticipation, Emily helped Chris get out of his wheelchair and then supported him as he slowly made his way across the stage to accept his diploma.

“My graduation walk was what I considered my game day or Olympic event,” he said later. “My full focus was to take the best steps I could possibly take and not worry about the audience or anything else.”

Chris’ walk across the stage has already inspired so many others who are facing similar challenges, but Chris didn’t want to leave it there.

He said he attributes his miraculous recovery to God as well as to the array of therapy options he had available. Realizing that many people with similar injuries might not have the same kind of insurance he did that could cover all the things they need to rehabilitate, Chris started a foundation – the SCI CAN Foundation – to raise money to help people get the equipment they need to recover.

He hopes others will be inspired to push for their goals and not let fear hold them back from accomplishing great things.

“So many people, including myself, fear failure, it’s human,” he said. “But if you do everything in your power to accomplish your dreams, at the end of the day, you can be proud and happy with how far you’ve come. Good things will come your way.”

Watch Chris’ journey to the graduation stage by clicking below:

Were you as inspired by Chris’ incredible story as we were? So share this!