Neither Daughter Is Engaged But They Both Show Up In Bridal Gowns. When I Saw Why…Tears 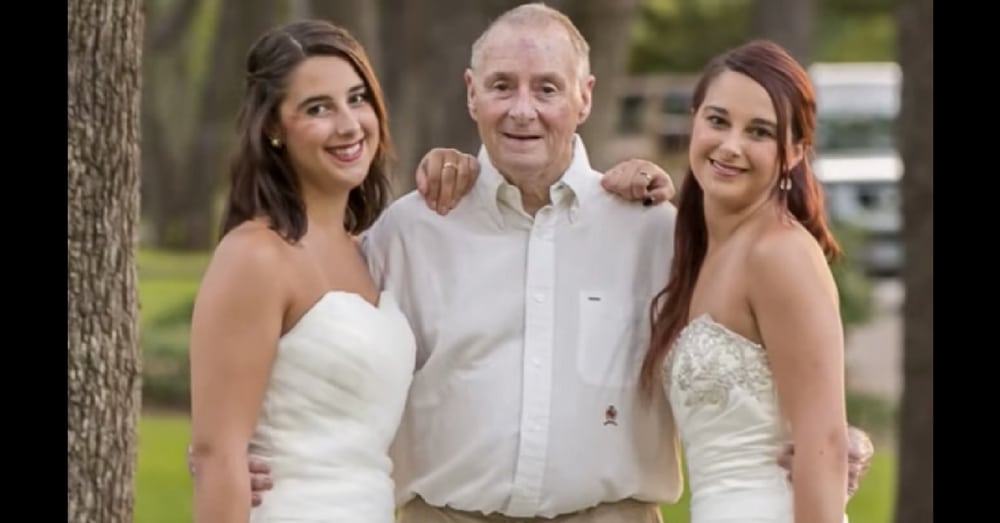 For identical twin sisters Sarah and Rebecca Duncan, family is everything. The two share an especially close relationship with their father, Scott, whom they describe as their “superhero.”

Scott did everything he could to make sure the twins and their brother had the best lives possible. He coached their athletic teams and was involved with the PTA at their school. He showed them love and protection and took care of them however he could.

Now, though, he is the one who needs care. Scott was diagnosed with Alzheimer’s disease in 2012 and his condition progressed quickly. He began to lose his memories and even the ability to take care of himself.

Sarah and Rebecca knew they couldn’t just sit back and watch their father slip away. They put their college plans on hold and committed to being his full-time caretakers while their mother brought in an income as an art teacher.

After two years of taking care of him, though, the family decided it would be best for Scott to be moved to a care facility near their home.

Before he moved, Sarah and Rebecca wanted to create some special memories with their dad before it was too late. That’s when they came up with a heartrending idea that has been taking the internet by storm…

Even though neither of the sisters had wedding plans or were even engaged, the 23-year-olds put on wedding dresses and set up a photo shoot with their dad in their neighbor’s front yard.

“He had the biggest smile on his face and his eyes opened up really big and he was really happy,” Sarah said about the moment Scott saw them in their dresses. “And he loved seeing us dressed up, so that was a really big deal for him.”

Even though Scott may not remember that day or ever get to actually see his daughters get married, for Sarah and Rebecca the memories of that special day will last a lifetime.

“He does not know what we were doing in wedding dresses in our neighbor’s front yard,” Rebecca said, “but for us it was a very special day, and those 10 minutes were the best minutes of our lives.”

Were you touched by the love and care these daughters have shown their dad? So share this!