Neighbor Calls 911 Over ‘Illegal’ Slip-N-Slide, But They Weren’t Expecting Cops To Do This 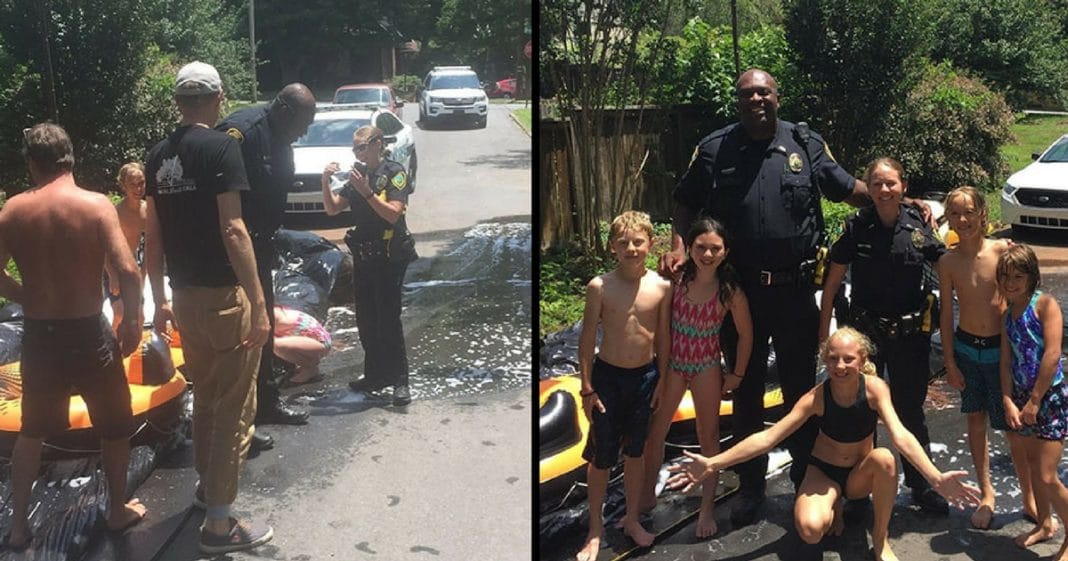 Some people just want to ruin all the fun!

I’ve never understood people like that – it’s like they are so miserable with their own lives that they want to make everyone around them miserable too.

At least that’s what it felt like when the cops showed up at this Asheville, North Carolina, neighborhood Fourth of July party.

One of the local dads had set up a giant slip-and-slide down the side of one of the quiet neighborhood streets so the kids (and adults) could cool off and have some fun on the hot summer day.

But it seems one of the neighborhood’s residents wasn’t so enthusiastic about the festivities. They called the police and complained that the slip-and-slip was blocking the road and the people riding it were being too loud.

Officers Carrie Lee and Joe Jones headed out to investigate the complaint, but when they got there they determined there was nothing wrong with what was going on.

“We looked at it and determined it wasn’t really an issue,” Officer Lee said. “So the first thing I said, I said, ‘I’m not here to break up your fun.'”

In fact, the officers asked if they could take a ride on the giant slip-and-slide! In videos of the event, which have since gone viral, Officer Lee can be seen using a large trash bag as a raft while Officer Jones slides down in an inner tube with one of the neighborhood kids.

“I thought I was going to be able to get out of it, because I’m too big to fit in a trash bag,” Jones said. “But then when the kids pulled out this big raft … I had no choice.”

“My butt is wet,” he exclaimed after splashing into the pool at the bottom, prompting giggles from the kids.

The neighbors were thrilled that these officers would take the time out of their day to have some fun with them and show the kids a different side of law enforcement than they might otherwise see.

“I still can’t handle the amazing-ness of it all,” said resident Katlen Joyce Smith. “I hope the neighbor who called them saw it all go down!!”

“They had such good energy,” another resident, Travis Eagledove, said of the officers. “All the kids were loving it.”

Did you love watching these police officers go out of their way to have fun with these kids as much as we did? So share this!