Mom Takes Son Shopping, Then She Finds A Note From Stranger 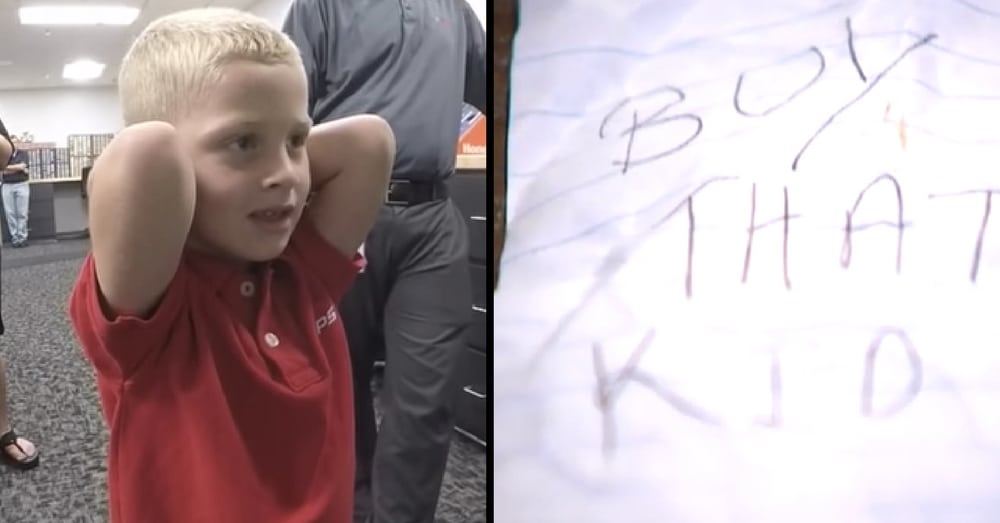 Being a mom is often difficult, and that is especially true for mothers of children with autism. That doesn’t mean they love their children any less – on the contrary – it just means there are special challenges they have to face and have learned to deal with.

For Brittany Miller, that challenge is noise. Her 6-year-old son Grandy, who has autism, LOVES fire alarms. He collects them, makes models of them, and even likes to imitate their sounds. Brittany says it’s how Grandy copes with other loud noises that often bother him.

While Grandy’s noisiness can sometimes be challenging, it is something Brittany has learned to live with. She loves to see Grandy so passionate about something and is proud of how smart he is and how much he loves to learn.

As a mother of a child with autism, Brittany likes to educate others about what autism is and the challenges and differences it can bring; but on a recent shopping trip, she wasn’t even given the chance.

Brittany and Grandy were at the grocery store when Brittany turned around to help her son fix his shoe. When she turned back to her cart she saw a note on top of her bag. What it said left her stunned.

“Buy that kid a muzzle,” the nasty note read.

Brittany looked around to see who had left the rude note in her cart, but she didn’t see anyone. She said if she had seen who had left it she would have loved to spend a few minutes introducing them to Grandy and explaining why he was being a little loud.

“I don’t know an autism mom that doesn’t want to raise awareness,” she said, “so we are more than happy to take four or three minutes out of our day to explain just a little bit.”

Since Brittany couldn’t talk to the person then, she decided to share her story in the hope that they – and others like them – would see that they shouldn’t always be so quick to judge.

“I hope the next time you encounter a child that’s different, I hope you take into consideration that you don’t know anything about this person and what they’re going through, and they don’t have to look different on the outside to be different on the inside,” Brittany said.

After sharing her story it quickly went viral, and it led to something Brittany never expected.

“It blew up and fire alarm companies sent boxes of fire alarms to us, and Grandy opens them up and he knows every one — make and model numbers — and it was like Christmas for him,” she said. “It was within days I was getting emails from other parents saying ‘Thank you for speaking out. Can we send your son a gift, can we send you a gift?’”

In addition, the Grand Rapids, Michigan, E.P.S. Security company invited Grandy to visit their office and training facility – a visit the young boy called “the best day ever.”

Brittany had no idea how much their story would touch so many others, but she’s glad they have been able to help spread awareness about autism and is thankful for the wonderful experiences Grandy has had because of it.

“That note was a blessing in disguise,” she said. “I had no idea it was going to turn into all this, but Grandy is the one really benefiting from it and giving him experiences of a lifetime that I would never be able to give him otherwise.”

It just goes to show that kindness will always win out in the end!

Were you happy to see what happened for Grandy as a result of the rude note? So share this!