Mom Starts Tickling Baby, But What This Dog Does Next Will Melt Your Heart 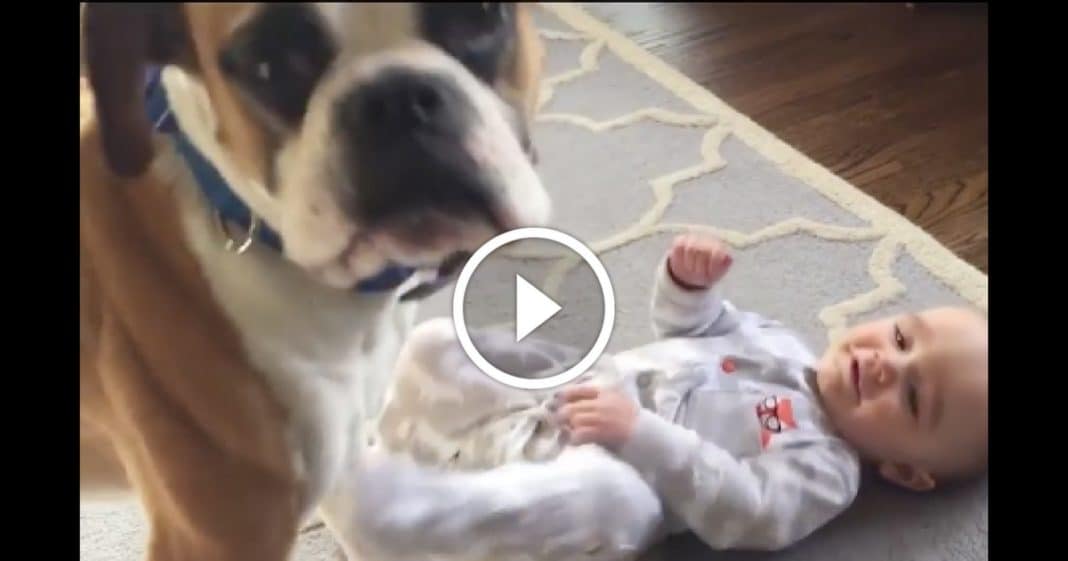 Katie Wahrhaftig rescued 2-year-old Boxer Jeeves when she was 5 months pregnant with her son Graham.

“We had just lost our previous dog, which was the love of our lives,” she said.

As it came time for Graham to enter the world, though, Katie got a little nervous about how Jeeves would respond to the new baby.

“I had a lot of anxiety bringing Jeeves into our family when I was five months pregnant. We were worried he wouldn’t like the new baby,” she said. “I worked hard to make sure Jeeves felt like a part of things and was still an important part of our pack.”

Katie needn’t have worried, though. As soon as Graham was born, Jeeves took to the role of older brother like a fish takes to water! The two of them are the best of friends.

“He’s a lifesaver,” Katie said of Jeeves. “Honest to God, no one can make Graham laugh like Jeeves. They’re funny, they’re a lot like siblings.”

An adorable video that has been making the rounds lately shows the special relationship Jeeves and Graham have. Whenever Graham starts crying, Jeeves knows just what to do!

Katie says Jeeves never fails to make Graham laugh. He will nuzzle his nose into the baby’s tummy until Graham is overcome with fits of adorable laughter!

“Nobody makes him laugh like his best friend,” Katie said of Graham and Jeeves. “At this point, they can play this game on a dime and even give each other cues letting the other know it’s time.”

Katie added that Jeeves tries to stay as close to Graham as he can throughout the day, always watching out for his little “brother.”

“Jeeves will go sit or lay down right next to him, and Graham will start pulling his tail or his ears,” she said. “He acts like it annoys him, yet he’ll sit closer to him.”

This sweet pair has a special relationship that we’re sure will last the rest of their lives together.

Did you love watching this sweet pair playing together as much as we did? So share this!