Mom Rejects Baby With Skin Like Old Woman, But Grandpa Gives Her A Second Chance 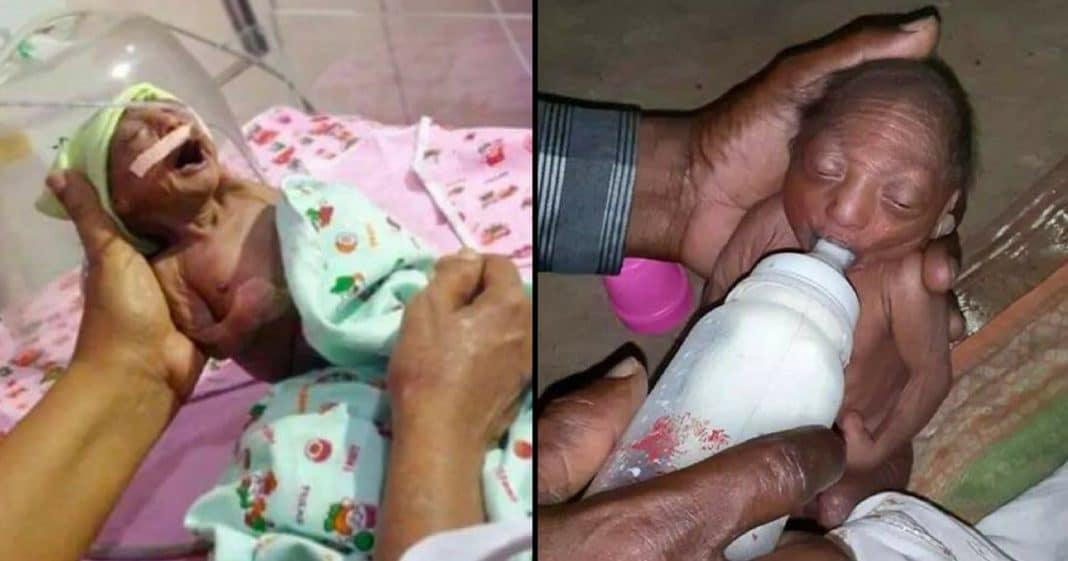 It’s hard to imagine a mother not wanting her child. After carrying the baby for so many months, excitedly anticipating its arrival, and bonding with it while it is still in the womb, I can’t imagine just giving it up at its arrival.

But that’s exactly what this little girl’s mother did.

The baby was born prematurely in a small village in western India, and as soon as she arrived it was clear there was something different about her.

She had an abnormal skin condition that made her skin incredibly wrinkled. Her appearance is thought to have been caused by some chromosomal abnormality and Intra-Uterine Growth Retardation, a condition where the baby does not grow properly in the womb, often due to lack of nutrition and oxygen.

However, because the baby was born in a small, rural village in India, there was a stigma surrounding her condition. People were fearful of the little girl, thinking she was cursed or contagious.

The little girl’s parents were so self-conscious of their daughter and fearful of the village’s stigmatization that they rejected the tiny baby. Her mother even refused to feed her.

It seemed like all hope was lost for this tiny baby, but then an unexpected hero stepped up in the form of her grandfather.

Dilip Dode, who is 50 years old, said he would take the child in and raise her. He spoon fed her goat’s milk for two weeks until he could get her to a hospital in Mumbai, some 138 kilometres away.

“I knew it was not her fault so I started taking care of her,” he said. “My only hope is that she gets well and lives a normal life.”

“I will try to convince her parents to accept her but if they still refuse, I will raise her up myself,” he added. “It is not her fault to have born different and I will not throw her for this disease.”

After Dilip took the baby in, something even more incredible happened.

The little girl needed immediate medical attention, but it would cost about 500,000 rupees, or over $6,000 U.S. When the Wadia Hospital heard the little girl’s story, they agreed to pay for the entirety of her medical expenses, and also gave her grandfather a place to stay during her treatment.

Dr. Minnie Bodhanwala, CEO at the hospital, said the baby “was dehydrated when she came to us and any further delay could have proven fatal. But now she is responding to the medical treatment and improving.”

Dilip is so grateful to the hospital for their generosity. He is determined to see his granddaughter thrive and live a healthy, normal life.

“I am thankful to the hospital for giving free medical treatment to my granddaughter,” he said. “It is really disheartening that even her parents have rejected her but I will go to any extent to save her.”

While this little girl may have started out her life in a dark and hopeless way, it is clear she now has many champions behind her. We know her grandfather will go to any extent to keep her safe. What an incredible man – he is a true hero!

Were you happy to see Dilip take his granddaughter in after her parents rejected her? So share this!