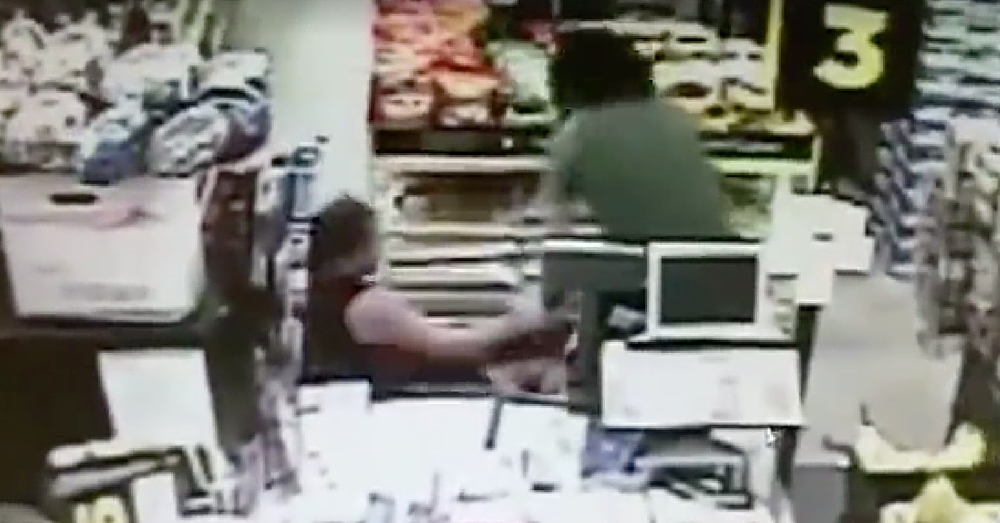 A terrifying video making the rounds today shows a man trying to kidnap a teenage girl in broad daylight.

In surveillance footage from the Dollar General in Hernando, Florida, 30-year-old Craig Bonello is seen calmly pushing a shopping cart down one of the aisles before violently grabbing a 13-year-old girl who was shopping with her mother and trying to drag her out of the store.

Thankfully, the girl’s mother sprang into action, chasing the attacker and playing a terrifying game of tug of war with him until her daughter was finally free and Bonello fled the store.

Off duty deputy Jonathan Behnen happened to be walking into the store just as the suspect was fleeing. The store manager yelled to him that the man running away had just tried to kidnap a child and Deputy Behnen “jumped into action, pulling his patrol car in front of the suspect’s vehicle as he tried to exit the parking lot,” police said in a statement. “He then ordered the man out of the car with his weapon in hand.”

“In my 10 years on the road I have never seen anything like this,” Sergeant Craig Callahan said in a statement. “He truly intended to abduct this child right in front of everyone in the store.”

“We’re very fortunate that the mother had the motherly instinct and did what she did,” he added. “She may have saved her daughter’s life.”

Thankfully no one was hurt and the girl is safe.

“Thank goodness the girl’s mother jumped into action to prevent this man from kidnapping her daughter,” said Commander Buddy Grant. “Thank goodness Dep. Behnen used his training and experience to stop this man from escaping. [Bonello] won’t be getting out anytime soon to do this again.”

Police said Bonello has a criminal history which includes aggravated battery, trespassing, and other misdemeanors, though he has never been arrested for abduction and is not a registered sex offender.

Were you amazed by this “mama bear’s” valiant effort to protect her daughter? So share this!