Man With Dementia Thinks He’s Returning To Vietnam, Then Vet Shows Up With Urgent Message 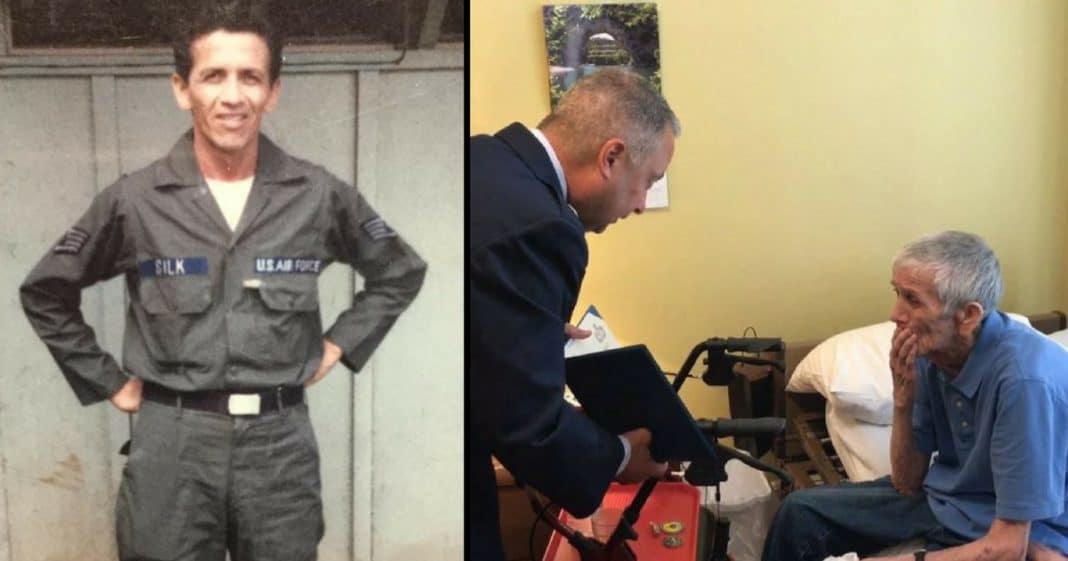 Retired Air Force engineer Lawrence Silk was just 21 years old when he began his military service. During his 20 years in the Air Force – from 1954 to 1974 – he did three one-year deployments to Vietnam.

Lawrence, who is 100 percent Native American (half Chippewa and half Standing Rock Sioux), is now 84 years old and, sadly, suffers from dementia.

As he has gotten older, his mental health has rapidly declined. It got so bad that he no longer trusted his wife or children and they had to make the heartbreaking decision to move him into an assisted living facility.

Watching a man who was once so confident and strong turn into someone who is almost unrecognizable has been incredibly difficult for the whole family. They want to be with him, but his distrust has resigned them to just dropping off his favorite foods at the care home and then leaving so he doesn’t have another “outburst.”

Recently, Lawrence has begun to have episodes where he is convinced that he is being called back to Vietnam.

“About six weeks ago, his memory and his conversations about his past became very erratic. Some memories would be complete nonsense and some would be clear as if they were yesterday,” Lawrence’s son-in-law, Kenny Dunn, explained.

“But through the ups and down, the one thing that he has clung to is that he is worried that the Air Force wants to send him back to Vietnam. He talks often and in great detail about the men he served with and believes that he spoke with them only yesterday.”

It is clear the thought of returning to the war is incredibly distressing for Lawrence and watching his pain has been heartbreaking for his family.

“He is one of the toughest men I’ve ever known and none of us have ever known him to cry, but he weeps when he brings up his duty to return,” Kenny said.

Despite their best efforts, they couldn’t convince Lawrence that he was retired and didn’t need to go back. Feeling hopeless, they tried to figure out what to do, and then Kenny came up with an ingenious plan.

“I posed to my wife that maybe we could get a military officer to come to him in uniform and basically relieve him of his responsibility,” Kenny said.

They shared their idea in a closed community Facebook group in their hometown of Vancouver, Washington, and within just a few hours had already received hundreds of offers from active duty and retired enlisted officers volunteering their help.

Lt. Col. LaFrazia was one of those volunteers and by the next day the family had made the arrangements to have him visit Lawrence.

“As luck would have it, the Lt. Col. had retired from the same civil engineering squadron in July that my father-in-law served in during Vietnam,” Kenny shared.

Col. LaFrazia entered Lawrence’s room in his full uniform and explained that he was in direct connection with Lawrence’s unit, which put the elderly veteran at ease. He then presented Lawrence with an official-looking certificate of appreciation from the Air Force with his retirement date on it, along with a civil engineering badge.

Lawrence Silk was relieved of duty.

Lawrence’s family has been incredibly touched by Col. LaFrazia’s actions and the kindness and compassion he has shown the aging veteran.

“Col. LaFrazia is a saint in our eyes,” Kenny said. “No stranger I have ever met has been more gracious, caring, and understanding.”

As for LaFrazia, he said he wants to help people understand that a veteran’s story doesn’t end when the war does. He hopes his visit helped highlight some of the challenges aging veterans face and the support that can be provided for them.

Lawrence’s family took lots of pictures of the touching meeting which they will put by Lawrence’s bedside, along with the certificate, so whenever his fears of returning to Vietnam come up he will have concrete evidence to help calm him down.

They will be forever grateful to Col. LaFrazia and the way he selflessly helped put Lawrence’s mind at ease that day.

“That a complete stranger came to us when we needed him the most and freely gave to my father-in-law compassion, hope, honor, and dignity,” Kenny said. “As far as dementia goes we couldn’t begin to give advice to people in our situation. Just remember to treat your loved ones the way you would want to be treated.”

Were you touched by what Col. LaFrazia did for Lawrence and his family? So share this!