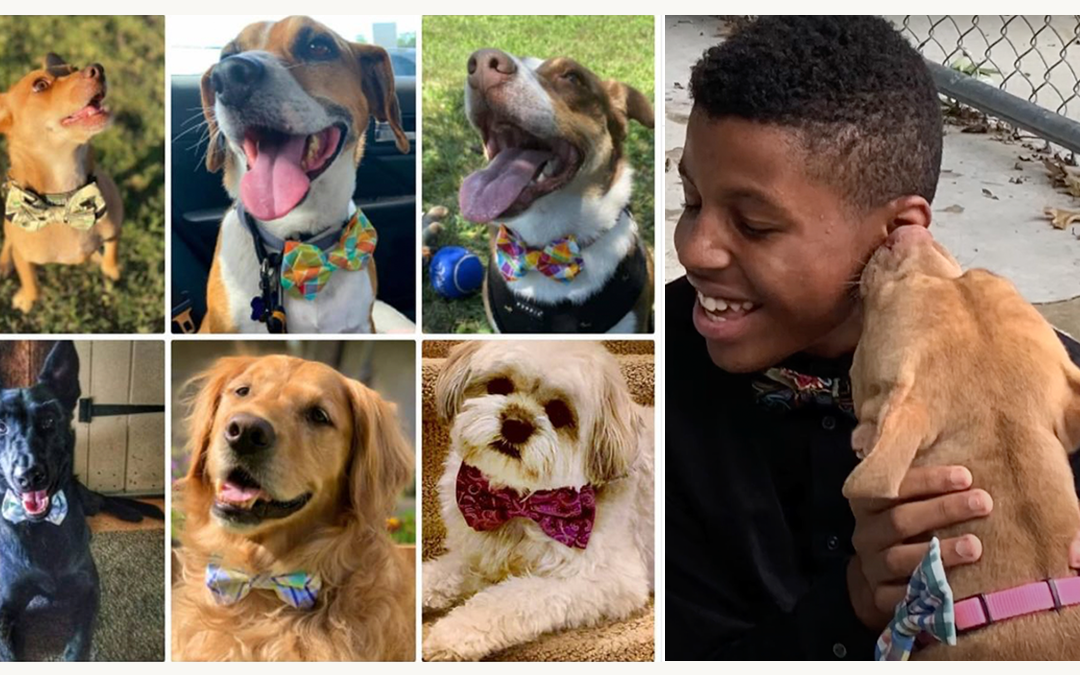 Darius Brown, AKA “Sir Darius,” is ready to “save lives one bow tie at a time” at 14-years old. The award-winning teen began creating handmade bow ties after learning how from his sister Dazhai when he was eight.

Although he was diagnosed with a speech and fine motor skills disorder early in life, making bow ties helped him overcome challenges.

His older sister was a cosmetology student who enjoyed making bow ties for her clients. Wanting to help, they worked on a Teenage Mutant Ninja Turtle-themed bow tie. From then on, he was hooked.

At first, his mother, Joy, was hesitant but eventually decided to get him a pair of safety scissors. Now, Darius is highly skilled in sewing and continues to make bow ties. As his skills developed, it helped him improve his motor skills and find a new love for fashion.

“I discovered my love for fashion and started making bow ties for myself,” he said.

In a few years, Darius came up with a new idea for his bow ties.

The Idea to Make Bow Ties for Dogs

Following Hurricane Irma and Harvey in 2017, Darius, then 10-years-old, learned that rescued dogs were being relocated to the ASPA in New York City. He realized his bow ties might help the pets look “dapper” and decided to donate them.

“I decided to use my passion for making bow ties to help dogs look cute and dapper, so they are more likely to get adopted faster,” he said.

So, Darius traveled to the shelter to donate 25 of his carefully crafted colorful bow ties. During his visit, he learned how dire the situation was for many of the pets. Sadly, hundreds of dogs were being euthanized every day due to overcrowing. Learning of this, he was devastated and decided from then on he would donate his ties to more shelters.

“It can be stressful at times,” Darius told CNN. “I always think about how many dogs I can help get adopted.” He thinks about how some shelter dogs that don’t get adopted can possibly get euthanized.

Soon, Darius donated more bow ties to the shelter and posted pictures of the adorable dogs on his Instagram page.

Bow Ties to Save Lives

Soon, other pet shelters in the US and internationally saw how effective the bow ties were. By posing with bow ties, the animals drew more attention, stood out, and had better chances of finding forever homes.

So, Darius spent more of his free time making the bow ties to donate. As his project grew, he began raising funds to cover shipping and supplies. Over the past four years, he estimates he made 600 which went to shelters across the country and the UK.

Along with his donations, he visited shelters in seven states to help at adoption events.

Eventually, he was so busy he opened a bow tie business called Beaux and Paws. There, you can find a bow tie in just about any color combination you can think of, from patriotic Stars & Stripes to a Ladybug design. A gallery showcases adorable pets with celebrity cameos and TV appearances.

Due to Darius’s efforts, hundreds of dogs have escaped euthanasia and found their forever homes.

” Dogs deserve to live a good life and be happy and loved, just as humans [do],” he said.

Recommended: Pit bulls become inseparable best friends and comfort each other in shelter

At just 14, Darius has founded a business, become a speaker, philanthropist, animal advocate. His efforts have been noticed, with a Presidential Commendation from former President Obama. Receiving the letter brought him to tears and stunned his mother. (see video below)

“That letter was just amazing to me,” said Darius.

His sister noted the letter gave him a boost of positivity and determination to succeed.

His story has appeared in international news, and he won many prestigious awards and television appearances. For example, in 2020, he was named the 2020 New Jersey State Honoree for the Prudential Spirit of Community Award. And, his bow ties were part of a NY City fashion show.

Getting Back to the Mission After COVID-19

Recently, he had to slow visits to shelters due to the pandemic.

“I really miss visiting the shelters, playing with the dogs and cats, and participating in adoption events. Due to Covid, I had to postpone the PAWSOME MISSION and ship bow ties to shelters rather than visit them, but I’m happy to say I will start visiting shelters again, SAFELY, very soon,” he wrote on Instagram.

We’re sure he’ll soon return to his mission: donating his bow ties to shelters in every US state. CNN reported he’s made it to DC and eight states so far. We’re rooting for him and know that he’s making a difference to save pets and change lives.

See more about his letter from Obama from PIX11 News: