He’s Upset When Car Breaks Down, But When He Sees What’s In Trash Heap Knows It’s Act Of God 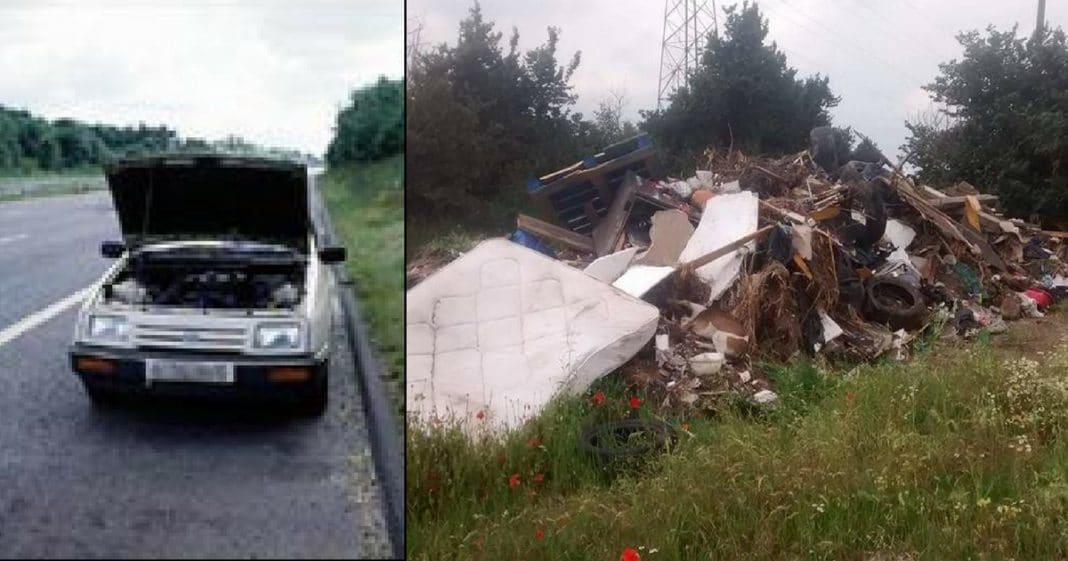 Car trouble is one of the most frustrating things. We depend on our cars so much to get us to where we need to be, and when the vehicle pops a tire or breaks down somewhere, it can throw the whole day – or even week – into havoc.

That’s what these commuters in East Tilbury, England, discovered as they were driving to work one day. Little did they know, though, that their car trouble would end up saving a life!

As the two men waited for help to arrive, they walked over to a nearby trash pile so they would be safe from the road, and that’s when they saw something that broke their hearts.

Hidden amongst the garbage – just barely visible – was an emaciated Saluki. The brown and white dog was skin and bones and so weak that she was just barely able to lift her head when the men came toward her.

“She was curled up behind a large pile of debris and rubbish,” said Rebecca Benson, an inspector for the local Royal Society for the Prevention of Cruelty to Animals (RSPCA). “She could only just manage to lift her head.”

The poor dog, who they estimate is only about 18 months old, was caked in mud and waste. The men tried to give her some water, but she wouldn’t drink it.

Rebecca rushed the sick pup to an animal heath center where the vet told her he suspected she had severe gastrointestinal problems. They decided the dog, who they named Penny, should stay at the clinic for a little while so she could be monitored and given the treatment and care she both needs and deserves.

“I hate to think what could have happened to her if [those men] hadn’t broken down in the area and stumbled across her,” Rebecca said later. “She’s literally been thrown out with the rubbish and was dumped at a location where she could have easily never have been found.”

Penny didn’t have a microchip or ID, so they may never know her full story, but they believe her owners probably abandoned her after realizing she was sick.

“I strongly suspect she’s simply been cast aside because she needed some veterinary attention and her owner didn’t want to pay for that,” Rebecca said.

She added that she is going to do her best to track down the cruel person or people who did this.

“To do something so cold and callous is just heartbreaking and I’d like to find out who is responsible,” she said.

Thankfully vets were able to rehydrate Penny and she is growing stronger every day. They expect her to make a full recovery!

After posting Penny’s story on the RSPCA Essex Havering Branch Facebook page, the group has been “inundated with offers of homes” for the sweet dog. For now, they are going to continue monitoring Penny’s health, but as soon as she is strong and healthy enough they plan to find her a good, loving home.

Had it not been for the commuters’ car trouble that day, Penny may have died in the trash heap. It’s a good reminder for all of us – sometimes when things go wrong, it’s really a miracle in disguise!

Were you happy to see Penny rescued by these guardian angels? So share this!