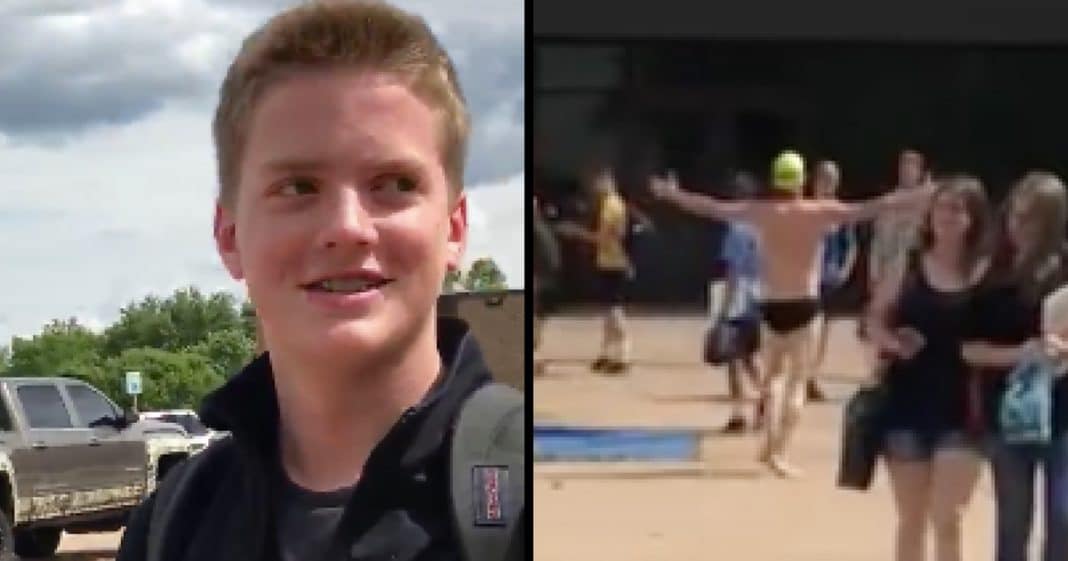 Being embarrassed by your parents is just part of being a teenager. I don’t know one person who made it through their teens without at some point being embarrassed by their mom or (usually) their dad. It’s kind of a parent’s job to embarrass their kids every once in a while.

If suffering embarrassment does, as they often say, build character, then 15-year-old Jack Beadles has it in spades! His dad, Justin Beadles, decided to celebrate Jack’s last day of school in a… memorable way.

As the kids walked outside to meet their waiting parents, Justin ran over to Jack wearing nothing but a Speedo, swim cap, and some medals around his neck. Jack’s mom filmed the whole thing as Justin put an arm around Jack and walked him to the car.

“I was just, like, half embarrassed, half thinking I was going to run away,” Jack recalled later.

While the prank caught him by surprise, Jack said this isn’t the first time his dad has done something like this. In fact, the fun-loving dad, who is a pastor at Countryside Baptist Church in Stillwater, Oklahoma, is known for his shenanigans with both his kids and his coworkers.

“My dad, he was the guy who always said, ‘Make a memory every day,'” Justin said. “And since he has been gone, I’ve particularly tried to do that.”

Once Jack’s embarrassment had worn off a little, he gave his dad permission to post the video on social media where it racked up over 6 million views in just one day.

Justin said the prank was in no way meant to punish his son. In fact, he ultimately did it because he loves him. When asked if he would do it again, he answered with no hesitation.

“I mean, even if nobody had seen it, I’d do it a million times again just because it was so much fun seeing the look on a son who I love, just seeing his face and him looking at me and us knowing deep down inside like, dad’s an idiot. But he’s also kind of OK,” Justin said.

Jack has been a good sport about the whole thing, but he said he plans to get his dad back. He just doesn’t know yet how he’s going to top this!

Did you love Justin’s prank as much as we did? So share this!